I didn’t become a firefighter.

Though undoubtedly there wasn’t a single inkling nor expectation that I would. My brother didn’t either. He held tight to a commendable naval career, while I got a business degree and a ring, became a mom, a few other things, then a writer. Yet for 35 years, my father spent every third day and night ‘on call’ to fight fires and rescue life and property.

I’d visit the firehouse sometimes. I loved to explore his workplace, try on his hat, and page fake emergencies over the intercom. But never once did I consider the profession for my own life’s work.

Sure, there’s still the local mom-and-pop shops—like the Italian restaurant around the block, where three generations of Pasquales season and serve delicious garlic goodness. But as a whole, we’ve almost completely lost touch with the idea of job inheritance that was second-nature in biblical history.

Today, daughters and sons are set to dream-up their own tomorrows from kindergarten. “What do you want to be when you grow up?” Miss Katie questions on welcome day. We’re wide-eyed with possibilities as we make our declarations; the height of imagination the only limit to our potential. Third-grade Community Helper day ignites new prospects that ninth-grade Career Day helps solidify. Guidance counselors swoop in with a detailed plan for achievement.

We want to give our kids what we can of the world, a future bright with promise (and salary). And it isn’t necessarily a bad thing; we love them hard within our means and the seasons and cultures in which we’re placed. Though in a corner of the world, time, and space where there is little our kids go without, there is something we all miss out on. We’ve lost a perspective we never had to begin with. Life as in the era of Jesus stands in stark contrast to our present reality and it takes some serious intent and understanding to rightly place ourselves in the context of His day, especially when digesting Scripture.

But it’s a valuable undertaking.

Young men (and especially women) of ancient cultures didn’t usually map out their own career path. And while it wasn’t necessarily a system of forced rigid inheritance, a son simply assumed the work of his father. It’s just the way it was—a given. He didn’t resent him for it, for it was all he knew. Rather, the son’s life became an endeavor to function as the father had in the performance of his family duty. In fact, it was so important that there be someone to succeed in the father’s work, that if no son was able, one would often be adopted into the family in order to carry on the work.

Whether to tend the vineyard, gather food in nets, shepherd flocks, build, or bake, occupations were centered in the family enterprise and a son was urged onward out of necessity, not from without but within. To know his father was to understand his father’s trade, and to learn this trade was the commission of a son’s life.

Even Jesus assumed carpentry, learning the skills of this trade from His earthly father. But it was ultimately His heavenly Father’s business He chose to attend to. Our King of Kings humbled Himself to become the flesh of a man. If anyone could have dreamed big and wide, if anyone could ‘be anything he wanted to be,’ if anyone could shoot for the stars, the corner office, and a massive following, it’d be Jesus. Yet for the sake of our understanding—our salvation and sanctification—“‘[He], though he was in the form of God, did not count equality with God a thing to be grasped, but emptied himself, by taking the form of a servant, being born in the likeness of men. And being found in human form, he humbled himself by becoming obedient to the point of death, even death on a cross” (Philippians 2:6-8). Without question or hesitation, Jesus willingly became subject to the work of His Father. It was all He knew. And all He desired.

On the brink of Jewish manhood and giving us His first utterance in the Gospel, Jesus sets a fascinating scene through the words of Luke 2:49: “And He said to them, ‘Why did you seek Me? Did you not know that I must be about My Father’s business?’”

It’s like looking for a Pasquale son behind the counter of a hardware store.

To search for Jesus anywhere besides His Father’s house was foolishness. He had work to attend to, and clearly, it was His Father’s work.

To search for Jesus anywhere besides His Father’s house was foolishness. He had work to attend to, and clearly, it was His Father’s work.

Do we know what it’s like to be about our Father’s work? To abandon our glittered ‘all-about-me’ preschool book, in lieu of bringing daddy as our show-and-tell?

Not only did Jesus not require His own unique trade or start-up company, but He simultaneously abandoned the need for a stand-out stand-alone identity—to ‘be someone.’ He was perfectly content to be of the Father, about the Father, and for the Father. In fact, Paul reveals Christ as the exact representation, literally the etching of God: “He is the image of the invisible God” (Colossians 1:15). The author of Hebrews adds “He is the radiance of the glory of God and the exact imprint of his nature” (1:3).

So let’s allow ourselves an unconventional reflection this Father’s Day. Not about ties and socks and steaks on the grill, but about who our Daddy is and what He’s all about. And about considering our identity in light of what we see in Him.

What if we took hold of the fact that our life really isn’t our own—with joy rather than resistance and resentment? For we are not imprisoned to the vineyard, we’re honorary heirs!

What if we didn’t just visit daddy at the firehouse, but took hold of the rescue mission as if it was unquestionably our own? What if it were foolishness to find us anywhere else, doing anything else?

Regardless of your own father’s life work or spiritual path, trust that you’ve got a proud and loving Heavenly Father with a divine purpose, ready for you to claim as your own. It’s important enough He adopted you just for this—this beautiful life’s work, this sacred call. May we be urged onward, propelled by our inherited purpose to know God and make Him known.

Let’s be about our Father’s business. 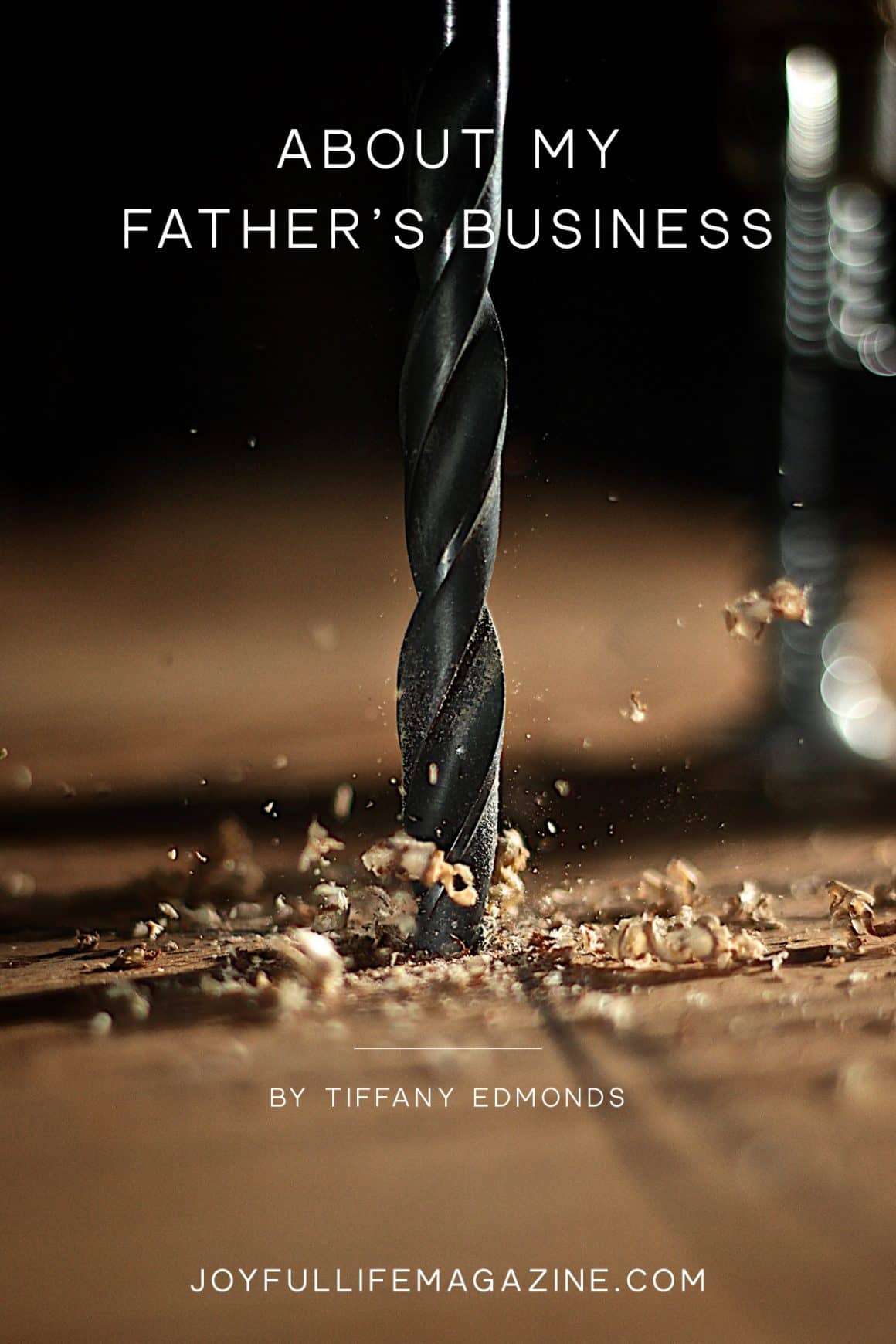 Tiffany Edmonds is a writer, Bible teacher, and habitual encourager seeking to make theology tangible for our everyday. She advocates for deep intentional study of God's Word and helps unearth biblical treasures right along with you over at tiffanyedmonds.com A happy wife to her childhood friend-turned college sweetheart, mama of three daughters, homeschooler, and baker, means she's writing in the margins and bathing in grace. For her, to live is Christ, and moment-by-moment walking in dependency on the Holy Spirit defines life's greatest pursuit.