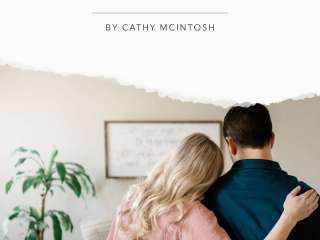 What should you do when you’re facing a difficult decision but asking God for wisdom only leads to silence and confusion? In this article, Cathy McIntosh shares 5 crucial steps to moving forward in faith and seeking God’s will even when it seems like He isn’t offering any answers.

My eyes locked with Mike’s from across the restaurant table. We were out with friends when the inevitable question came up. We’d answered it countless times in the last few weeks and had long since stopped asking God for wisdom on the matter. But the question was asked of Mike once more as the last dinner dish was cleared.

“Are you going to pursue your old job now that it’s open again?”

When he left his position as a county leader nearly four years ago, it left an emotional scar on our whole family. His compulsory departure seemed to create a crevice in our local community. It stirred division and fueled uncertainty for countless people who’d openly voiced their hope that he’d return.

We’d never seriously considered his going back. Our new life of far less stress and no middle-of-the-night calls felt freeing and glorious. We were traveling more, completing projects in our home, and best of all, pouring time and laughter into our three grandkids.

We felt that our family had finally moved on from the heartache of its loss, but now the position was open again. After months of grieving, we eventually learned to appreciate and embrace the life we were living. We were grateful for the new and unimagined blessings that God showered on us along this unfamiliar but exciting path.

Mike’s answer to the question was, “No.” As a couple, we were in complete agreement on that point.

Until a very short week later.

Just a few days later, our grandkids circled around the picnic table where we relaxed in the sunshine. It felt as if something inside of me unexpectedly snapped. I said aloud to Mike, “You have to try.” My comment surprised me as much as it shocked him, yet he knew exactly what I meant. He replied, “I know.”

The idea of returning to what he’d left behind seemed altogether random and unforeseen. I’m not a reactive person. I think about things, stew on them, and even obsess over them before making a decision. Yet I’d just blurted out an idea so foreign, so plagued with sacrifice, I wondered who in the world had uttered the words.

Even more surprising was the realization that, in the snap of a finger, Mike and I remained in agreement—but with a polar-opposite viewpoint from one we’d held just moments earlier.

When Nothing Makes Sense

Our change of heart was illogical, to say the least, but we couldn’t clearly discern it was a prompting from God, either. It certainly seemed supernatural for both of us to turn in the same instant. It seemed a God-sized mystery as we simultaneously did a 180 to consider something we no longer wanted.

There were hundreds of reasons not to pursue the position and we could count on one finger the reasons he should. As we searched and talked through the what-ifs and possibilities, a new fire began to burn in our bellies. Mike’s love for our community and his care for their well-being was the compelling pro that outweighed a long list of cons.

In the car driving home from the park that day, we cried out to God about this hair-brained idea that seemed to lack wisdom. Our Heavenly Father responded the way He so often does:

Still, I couldn’t shake our abrupt, synchronized shift. “Is this You, God?” I gasped. “Because it makes no sense!”

How to Make Decisions When It Seems No Answers Are Coming

Without warning, we found ourselves dazed and confused, unsure of what was happening. God was stirring desires we thought were deeply buried. He fueled passions we believed were snuffed out. Then, when we turned to Him for clarity and confirmation, He was still.

The window of opportunity for Mike to pursue the job was quickly closing, so we needed to make a decision and spring into action without delay. There was no doubt this would be a team sport. It would take all the gifts and skills we both possessed to pull it off. But how could we possibly make this decision without knowing God was in it?

We couldn’t. That was the bottom line.

If God was not in this, we wanted no part of it. But if He was, we didn’t want to miss it.

With our hearts aligned, we did the only thing we knew to do. We set our path in motion. All the while, we listened and watched for God to reveal His will.

In the absence of any other logic, we knew that only God could change our hearts so quickly while holding us in agreement in the process. God’s plans don’t always involve logic. Marching around Jericho before giving a shout and bringing down the walls is not human logic. Queen Esther’s plea for her people defied the human logic of her day. The Israelites defeated the Amalekites because Moses stood with his arms raised. There’s nothing humanly logical about that.

Mike and I couldn’t withdraw from action just because we couldn’t see the logic. With our hearts aligned, we did the only thing we knew to do. We set our path in motion—planning, preparing, and pursuing success. All the while, we listened and watched for God to reveal His will.

Our process of finalizing our decision involved five crucial steps:

When we pray, we often ask God for His wisdom and direction. When He remains silent, it’s our invitation to pray and seek Him more. As we ask for God’s wisdom, it’s important to remember that He reveals things in His timing, not ours. Scripture teaches us to keep asking, keep seeking, and keep knocking (see Luke 11:9). If we don’t we will likely miss His inspiration when He chooses to share it.

In trying to make our decision, Mike and I prayed constantly: together, alone, in the wee hours of the night and the twilight moments of daybreak. We invited a few trusted partners to pray with us, too. In each instance, we asked that we could clearly discern and know God’s will.

Many Bible verses reveal that some of the most amazing battles are won through acts of worship. 2 Chronicles 20 shares the story of Judah and Jerusalem under Jehosephat’s reign. A vast army was coming and the people were terrified. They received encouragement from the Lord that He would bring victory. Verse 22 says, “As they began to sing and praise, the Lord set ambushes against the men of Ammon and Moab and Mount Seir who were invading Judah, and they were defeated” (NIV).

Worship can connect us with the Holy Spirit and remind us of God’s truth and power in our life. It takes our focus off of our struggle and places it squarely on the One who can help us in times of need. It is also a weapon that establishes a path to God’s victory.

It would have been easy to sit back and wait for the Lord Jesus Christ to reveal the entire plan before we stepped forward. Instead, we put the right things in motion so—when the time came to cement the decision—we’d be fully ready. When there was no clear direction, we did only what we knew to do.

After each step, we got back on our knees and prayed again. Instead of giving our minds the answers we looked for, sometimes, it was His presence alone that ministered to our spirits. As we prayed we knew that at any moment God might stop us in our tracks. But until He did, we kept inching forward—listening, watching, and waiting before each step.

God reveals His plan and confirms it to us in a variety of ways: through His Word, His people, and through our life’s circumstances. It often surprises me that His Word speaks to the very concerns I carry in my heart, and this situation was no exception. It bolstered my trust to read “Oh, the depth of the riches and wisdom and knowledge of God! tHow unsearchable are his judgments and how inscrutable his ways” (Romans 11:33).

When we asked trusted friends for advice, they fully supported and encouraged us to proceed. It would have felt a little safer to have at least one friend ask, “What in the world are you thinking!?!” Instead, those we trusted most were excited and motivated to help.

And God aligned the circumstance, giving us just enough time to prepare what we needed. Door after door opened before us, so we accepted it as confirmation and continued to walk forward.

Feelings matter. They aren’t to rule our actions, but they can be indicators of God’s involvement in a situation. In our case, we experienced restored desire and excitement. Most of all, we walked with a surprising measure of peace that practically carried us through the process.

It’s not uncommon for me to feel fear about things that are unknown. I’ve learned that fear nearly always stems from the enemy and his attempts to derail us from God’s plan. In this case, I had no fear but experienced the “peace of God that surpasses all understanding “(Philippians 4:7).

In each phase of the decision-making process, we discerned God’s silent but steadfast confirmation and continued to press forward. Mike threw his hat into the ring to compete for the position. As of now, we continue to wait for the outcome. Whichever way things work out, we’re walking in obedience to God, trusting Him every step of the way. As we continued asking God for wisdom, He quietly removed our doubts and gave us the confidence to move forward. To Him be the glory.

How have you moved forward in faith and made difficult decisions when God has appeared silent? Which of Cathy’s tips mentioned in the article resonates with you the most? Are there others you would add to her list?