It was an absolutely beautiful fall morning, my favorite time of the year, and the house was silent—my four boys still sleeping peacefully. If choosing joy were possible, it would have been easy that morning. The sun was just beginning to rise and it was that serene time of the morning when the day ahead feels full of hope. I sat comfortably, nestled in an overstuffed green chaise with a soft knit blanket over my legs. Both of my hands were warm against my favorite mug filled with my morning mocha—my Bible open in my lap. I gazed out the grand picture windows that graced the entire back wall of my enormous living room in the largest and most beautiful home I had ever lived in.

It was a picture-perfect morning—but my soul was desperately unhappy.

I remember it so vividly because I was particularly struck by the fact that the miserable state of my heart conflicted so painfully with the loveliness of my external surroundings. It was that morning that my heart was abruptly awakened to the reality that my life was markedly absent of joy.

Over the next hour I felt a growing anxiety as the minutes ticked by, ebbing closer to the time that my boys would begin waking one by one. The morning silence would soon be replaced by the sounds of life in a houseful of four young boys. Bickering, rowdiness, and laughter one minute—cries the next. I knew the routine and I felt so inadequate to inspire my children to be kind, loving, obedient, and joyful.

I was homeschooling at the time, our seventh year, and I found myself in a season of unusual difficulty. There were so many external forces in play that created greater challenges than previous years. And on a disturbingly regular basis I found myself sneaking away to my room to cry. Many days I didn’t even bother to sneak away—I just let my raw, angry tears flow in front of my children. My anger wasn’t because of them—quite the opposite; they were precisely where I was finding all my happiness.

A BURDEN TOO BIG TO BEAR

But being responsible for their mother’s happiness was a burden my children were never meant to bear. And a burden their young sinful hearts could not maintain on a daily basis—or even an hourly one. They were only children after all, but there could not have been any doubt in their hearts that their mother was deeply unhappy.

I wish I could tell you a beautiful story of how God used that morning to immediately breathe new purpose into my life. That the next chapter told of how I clearly heard Him calling me to sit and linger with Him and to tether my heart to His. And, I sincerely wish the next page told of a dramatic change of heart. Instead, it was just the first page of a long novel with bitterness and ‘choosing joy’ as recurring chapter themes. However, there is, indeed, a happy ending. Actually, there is a joyful ending.

I had never struggled much with coveting what other people had. Over the years, I had many friends with model perfect homes, luxury cars, beautiful faces, fit bodies, expensive clothes, wonderful relationships with their husbands and children, and creative talent that left me speechless. But I never envied them for what they had.

Instead, I expended all my ‘envy energy’ coveting a different version of my own life—the life I had expected to have. Not the incredible life I was blessed with, but the life I thought I deserved.

Somehow I had become unintentionally enslaved by the routine of mindlessly pitting my day-to-day reality up against the picturesque adulthood I had dreamt up prior to marriage and children. Occasionally, there was a day that was free enough from challenge and struggle that it could stand head to head against the idol life I had envisioned. But the vast majority of the days paled in comparison and left me feeling covetous, depressed, bitter, and defeated.

I was failing at life—or so I believed. 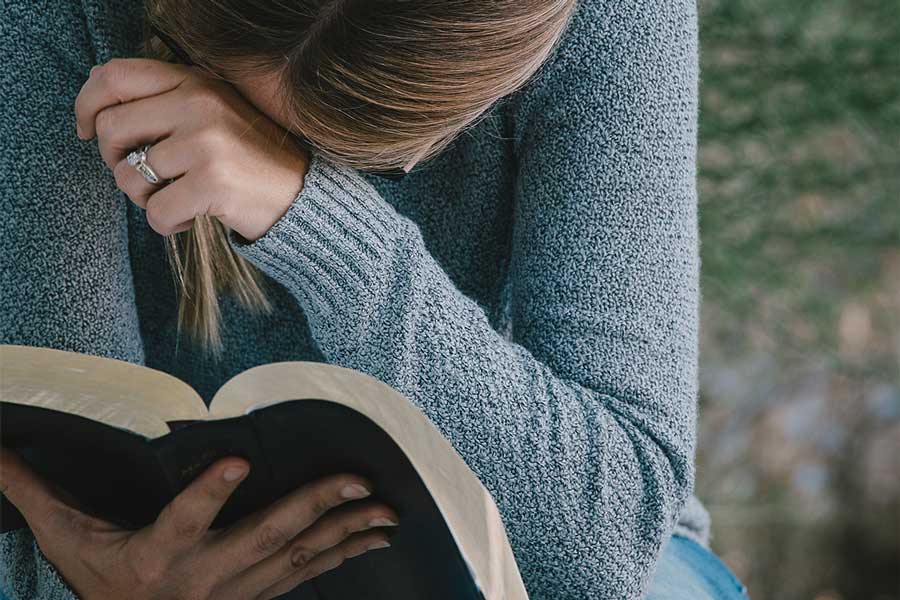 There is a popular mantra that you hear so often—‘Choose Joy’. If you’re on Pinterest or Instagram, you likely come across some depiction of ‘choosing joy’ in a beautiful scripted font on a daily basis. You’ll find it mod-podged on wood signs, screen printed on t-shirts, embossed on journals, hand-stamped on jewelry, and framed and perfectly placed amidst the most welcoming farmhouse décor. You’ll even find it tattooed on bodies! ‘Choose Joy’ is everywhere—because people desperately want to live a joyful life.

I spent many years after that morning of reckoning trying hard to create a more joyful life.

Over the course of the following four years, I made many choices that were unexpected—and extremely life-altering. All with the expectation that they would bring a measure of joy into my life.

I started a new career—a creative and financially successful one. In time I indulged myself by spending freely on things I believed would make me happy. I lost a lot of weight in order to feel beautiful and worthy. I bought expensive clothes. And I made several new friends. I put my children in school. And I ended a marriage that I selfishly blamed for much of my unhappiness.

To a believer, those choices—or at least the motives behind them—all raise red-flags and resonate as a lack of wisdom—foolishness.

SURROUNDING MYSELF WITH LIES

However, to a world which elevates ‘self’ to a place of highest regard—those choices make perfect sense. Often, they are even applauded, when someone is searching for the happiness they ‘deserve’. I had unintentionally surrounded myself with lies from every angle. Lies that reinforced what I wanted to believe: that I could create a more joyful life for myself by indulging myself with the things I believed I deserved.

But joy isn’t created any more than it’s chosen.

It’s taken me many painful years walking through the carnage of lessons learned, largely at the expense of my family, to arrive at the simple and beautiful truth about grace and authentic joy.

Joy is a fruit grown naturally on branches that abide in the vine. All we need to do is abide in Christ. Nothing more. Simply abide.

By literal definition you can read this as:

We are required only to abide in Christ. And in exchange for abiding—He promises to bear us the fruit of joy.

“Abide in me, and I in you. As the branch cannot bear fruit by itself, unless it abides in the vine, neither can you, unless you abide in me. I am the vine; you are the branches. Whoever abides in me and I in him, he it is that bears much fruit, for apart from me you can do nothing” John 15:4-5, ESV. 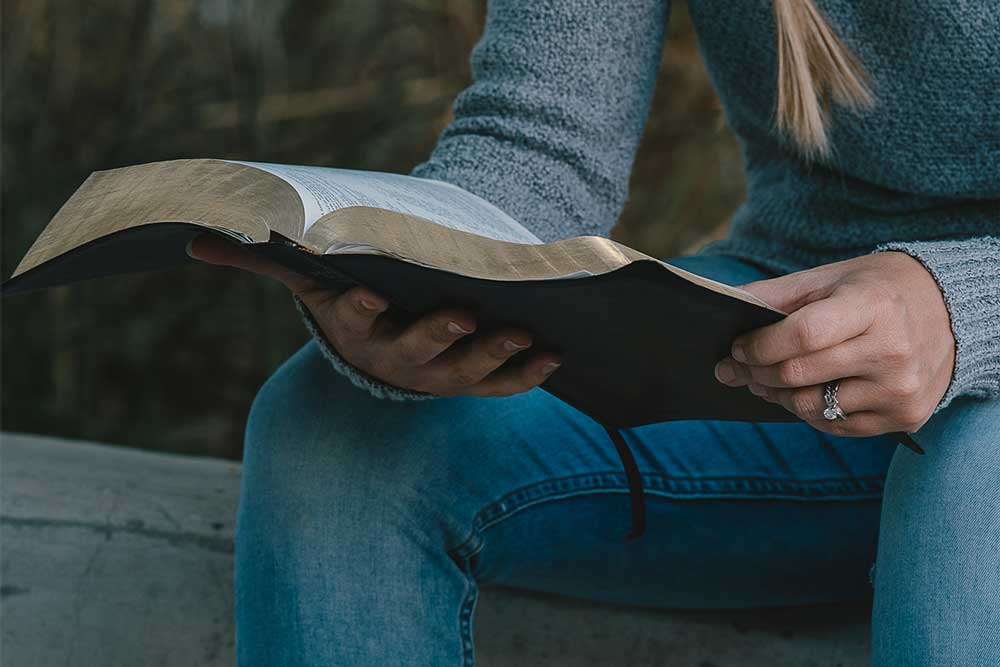 DO YOU LONG FOR A JOYFUL LIFE?

Choose to trust in God’s ability to make whole, that which is broken; rather than in your own ability to fix.

Choose to be content with what you have; rather than longing for more.

Choose to see beauty in the ordinary; rather than chasing the idol of perfection or expectation.

Choose to lean in to Jesus for the grace to grow; rather than striving in the futile mire of self-sufficiency.

Choose to pray; rather than complain.

Choose to intentionally seek; rather than aimlessly wander.

Choose to wholeheartedly invite Jesus into every area of your life; rather than visiting with Him occasionally.

Choose to commune with Christ naturally and freely as your Savior, Brother, and Friend; rather than as a formality or duty. Relationships aren’t built within the framework of formality.

MY PRAYER FOR YOU AS YOU SEEK TO GROW IN JOY

To my sisters in Christ—my prayer for all of us, as we choose to abide in Christ, is that we become women abundantly blessed by a harvest of sweet joy, and that we would share that harvest generously with those around us in order to bring glory to Jesus. 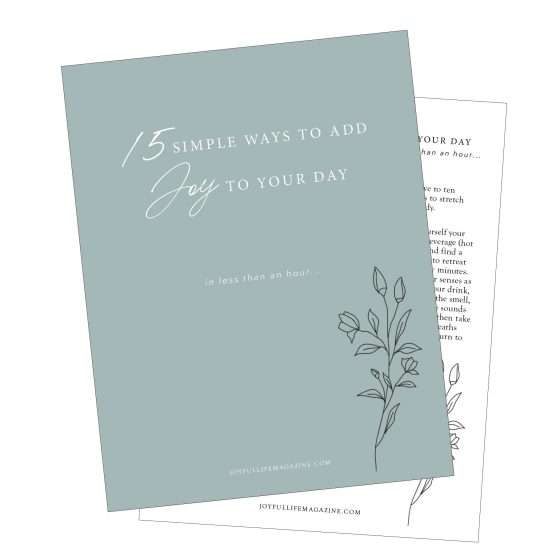 15 Simple Ways to Add Joy to Your Day!

in less than an hour

Download our FREE PDF of
15 SIMPLE & TRANSFORMATIVE WAYS
to add more joy to your day
—in less than an hour!

Sandi Warner is married to her favorite person in the world, her husband Tim, and is the mother of 5 children (4 boys and 1 girl) ages 9 to 27. She is the Founder and Editor of The Joyful Life Magazine, as well as a Christian writer, photographer, DIY enthusiast, and pinner of food. She writes about navigating life by leaning hard on grace and Jesus.