Our first Christmas was celebrated in our old 1950’s farmhouse. Its tiny frame stood proudly beside the massive, red oak tree where we’d been married just a few months earlier. It boasted an original fireplace, wood plank floors, one tiny bathroom, and two little bedrooms. Though charming, it was definitely a fixer upper—but we were broke at the time. However, the barn behind the farmhouse was a different story. It gleamed of beauty, and its red exterior and massive, double wooden doors beckoned the curious to remove the wooden plank, as its rusty hinges called the seeker inside for adventure. The brick breezeway and pristine stalls whispered stories of majestic race horses who’d lived there long before we bought the old place. The overhead loft was stocked with fresh hay, offering its sweet, earthy scent to every visitor who wandered inside the barn.

Our old horse, Buck, and our son’s white Shetland pony, Ellie, felt like royalty living in that big, red barn with the stray cat we lovingly named Lucy and her many, many kittens.

As Christmas Eve drew near, we drove to my parents’ Christmas tree farm and cut a small Virginia Pine. My Dad reminded me to water it every morning so the needles would stay fresh and the sweet smell of Christmas would linger long after the gifts were unwrapped. My two young sons from my previous marriage danced around the little tree with their new stepdad. My husband had never been a dad before, and my two little boys (one with Down syndrome) quickly introduced him to Fatherhood 101.

He wanted our first Christmas as a family to be perfect for them, and he poured everything he had into making it the most magical Christmas ever! We decorated the tree, made cookies, drank hot chocolate with tons of marshmallows, and sang every Christmas carol with incredible off-key joy! He even dressed up as Santa to deliver their Christmas gifts later that evening. Earlier that night, the boys squealed with excitement when we took their picture in their matching Christmas pajamas by the little farmhouse Christmas tree. After we read them a few more stories of Santa, my husband asked the boys to get their coats.

The night sky exploded with glorious stars as we walked out to the big, red barn. I had no idea what he had planned, but when he opened the big double doors, we found old quilts and bales of hay placed for seating. The wooden manger set I painted for the boys when they were babies had been placed in the center of the brick breezeway. He lit the candles, pulled out his Bible, and began to read the Christmas story of the birth of Jesus. The candle light in the barn flickered in the darkness and ushered in the story of the Light of the World.

My very busy little boys sat silently listening to his every word as he read: “And she gave birth to her firstborn son and wrapped him in swaddling cloths and laid him in a manger, because there was no place for them in the inn. And in the same region there were shepherds out in the field, keeping watch over their flock by night. And an angel of the Lord appeared to them, and the glory of the Lord shone around them and they were filled with great fear. And the angel said to them, ‘Fear not, for behold, I bring you good news of great joy that will be for all the people. For unto you is born this day in the city of David a Savior, who is Christ the Lord'” (Luke 2:7-11).

A holy hush covered the barn as the horses leaned their heads over their stall doors, ears up, in recognition of the story of the Christ Child. Even our dog, Bear, sat in reverence instead of chasing the cats. They knew. We knew. The reality of the birth of the Son of God was palpable. You could almost hear the angels singing on the hill behind the barn.

The real meaning of Christmas became fresh and new in my heart that night. The living, breathing story of Jesus’ birth caused me to weep openly. I had been carrying around my past sins like a damaged package, afraid to set them down, not sure what to do with them. Brokenness had left a wake of unworthiness and of feeling unloved, crippling my ability to see myself as God saw me. But that night—watching the love of the gospel pour out of my new husband onto my two little boys—became a living, breathing example and reminder of how God loves me. God pours out His love for us in the sweetest and most sacrificial ways, not because He has to, but because He wants to.

He willingly came to this earth as a baby, born in a big ole’ barn among the hay and the animals, for people just like you and me. Yet He didn’t stop there. Jesus spent His entire life on this Earth demonstrating sacrificial love, and He carried His love for you and me all the way to the cross. Through the power of the resurrection, He is alive today—our living, breathing Savior—and He sits at the right hand of our Heavenly Father waiting for His children to come back to the barn, even in our brokenness, to accept His amazing love for us.

God pours out His love for us in the sweetest and most sacrificial ways, not because He has to, but because He wants to.

We sold the old farmhouse a few years later, and it has been many years since we spent Christmas there. Yet every year, as we decorate the tree with picture ornaments of sweet family memories, I can’t wait to open the box containing the treasured photo of our first Christmas as a family in the big, red barn. The picture of my boys with their new stepdad sits at the top of the tree, and, as my husband still reads the Christmas story to our now 34-year-old son with Down syndrome, it reminds me of his sacrificial love during such a sweet and broken time in our lives. Even more importantly, it draws me back to the barn, to the manger, and to the cross, where God restored my faith and covered my sins with His swaddling blanket of grace, enabling me to believe once more in His redemptive love.

May this Christmas draw you into the barn, too, to hear the living, breathing story of the Savior once more. 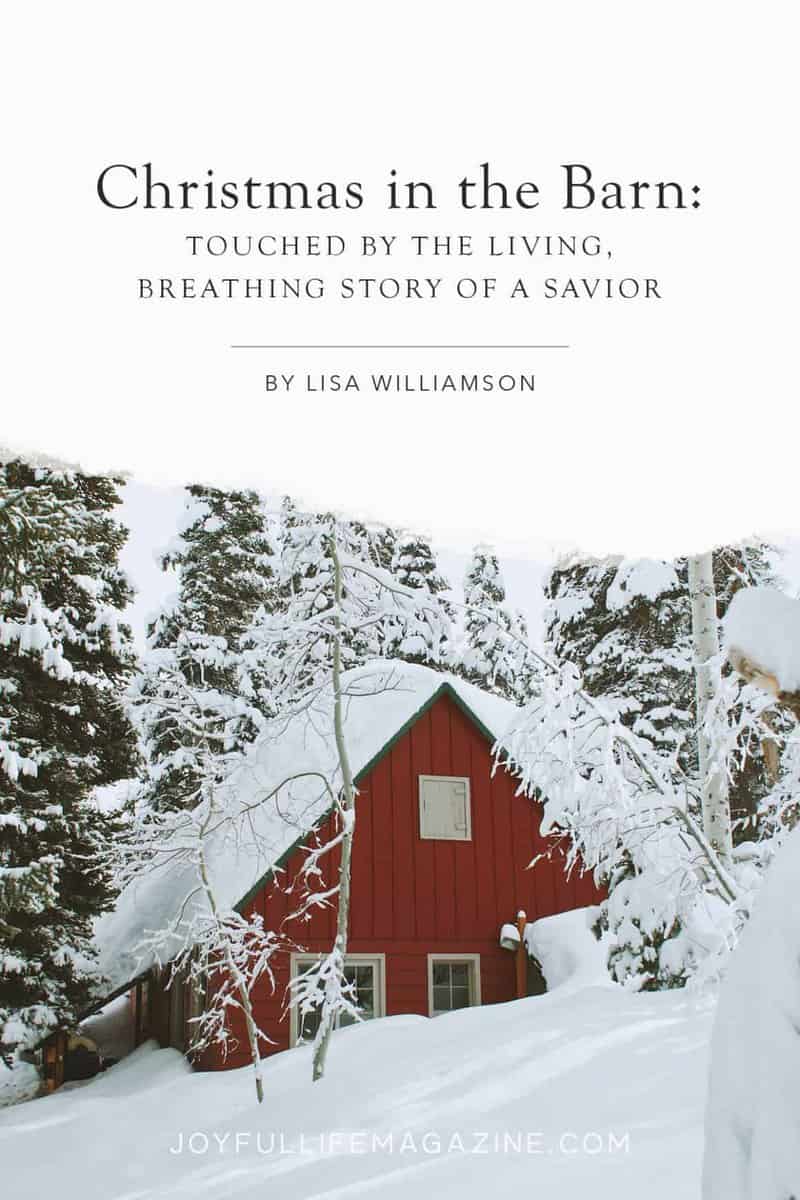 Lisa Williamson is a retired elementary school teacher. She and her husband, Doug, and son, Jordan, along with their doodle, Rosie, live in Vestavia, Alabama.