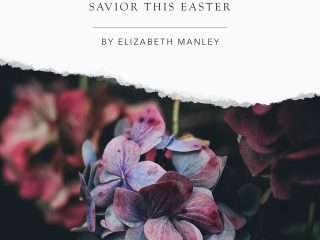 Of all the comforting Bible verses we can find within the pages of God’s Word, perhaps none reveal the comfort of God as vividly as Revelation 21:4, “He will wipe away every tear from their eyes, and death shall be no more, neither shall there be mourning, nor crying, nor pain anymore, for the former things have passed away.”

Our Lord Jesus Christ, our Risen Savior, has overcome death and the brokenness of this world, and because of this, He is able to offer us the comfort, calm, and quiet of God.

And the best part is, we don’t even have to wait to see Him face-to-face before we being to experience God’s comfort. Elizabeth Manley gives us a picture of what it looks like when God steps into our earthly chaos and replaces it with His heavenly calm.

“Maybe he was in such a good mood because he had just seen God?”

Our 10-year-old’s proclamation during dinner rang in my ears long after the spaghetti sauce was wiped clean from the table and four wild kids were rounded up and tucked into their beds.

It had been two years since my dad suffered a sudden cardiac arrest. Our oldest daughter is the only one of our children to have any real memories about that summer, so our dinnertime conversation about their granddaddy flooded their hearts with wonder and curiosity while my own mind was overcome with memories.

A SEASON OF BROKENNESS

That was also the summer I broke my big toe. In anger, I slammed it into a basket full of toys, propelling it across the room and scattering its contents everywhere. I am not usually in the habit of kicking toys around, but the day before had been spent in a hospital waiting room in Atlanta. My dad was in a medically induced coma after cardiac arrest stole his heartbeat for 27 minutes. We weren’t sure if he was ever going to wake up again. I was afraid—and livid.

A hundred miles away, in a hospital in South Carolina, my father-in-law was also in a coma-like state after a traumatic brain injury. For weeks, we lived with the heartbreaking reality that he wasn’t waking up from the brain surgery that had saved his life. Then a month later, my dad suffered his own medical emergency. None of the doctors offered us any reassurances on what recovery would look like for either of our dads—if they managed to wake up at all. It felt like a cruel nightmare.

A week later, my dad woke up. It seemed like months had passed in that hospital room, but slowly he regained a little bit of consciousness each day. At first, the only communication he could give was to wink and smile widely at us, and while it took time for words and full awareness to come back to him, his good mood rarely changed.

“Maybe he had just seen God.”

Something stirs inside me as I think back to the calm smiles and playful winks my dad would shoot over at us after he first woke up. You have to understand that playful isn’t an adjective I would typically use to describe my dad—a retired Army Colonel. But something happened in those 27 minutes. Something unexplainable. Something holy.

In what I can only describe as a miracle, my dad was discharged from the hospital five weeks after his cardiac arrest. Eventually, my father-in-law would open his eyes and slowly wake up as well.

The raw, breath-stealing moments of that dreadful summer are gone now. My dad is mowing the lawn again, riding his new exercise bike, and golfing with friends. Recovery for my father-in-law looked very different. His day-to-day life required 24/7 medical care, and my husband and his sister had to learn how to navigate a world of guardianship and long-term care facilities before his eventual passing earlier this year.

I believe that His desire is for us to come to Him and be comforted, calmed, and quieted by His love.

FINDING THE COMFORT OF GOD

Truthfully, our hearts still look a lot like my broken toe did two years ago—tender and bruised. We still don’t understand why both of our dads had life threatening medical emergencies that same summer, or why my dad has recovered miraculously and my father-in-law was left with debilitating health issues. I won’t pretend that in quiet moments my thoughts don’t wander to asking why, or that anger doesn’t sneak in.

Yet my tender heart often echoes the prayer of David’s words from Psalm 131: My heart cannot understand, my eyes cannot see, I know that I can’t understand things too great or marvelous for me. But I can come to You, and be calmed and quieted in Your presence. I can hope in You, Lord, from this time forth and forevermore.

WHAT MARVELOUS THINGS WILL WE BEHOLD?

As we approach Easter this year and remember what Jesus experienced as He was betrayed and crucified, it seems too great and marvelous to believe that He would have entered into this pain willingly. From my limited perspective, I struggle to believe that I would choose any struggle or grief willingly. Most of us have deeply grieved losses of all different types during the pandemic—2020 was indeed a year of heartache for the whole world. Our tender hearts are heavy with questions, while grief and loss blanket us. But I am convinced that the Lord isn’t angry when we ask questions and anger burns within us at the brokenness of this world. When the questions and anger surge, I remember that the Jesus we worship as our risen Savior is the same One whose care and love for us led Him to the cross. I believe that His desire is for us to come to Him and be comforted, calmed, and quieted by His love.

This Easter, I am praying that we will take our broken, tender hearts to Jesus again and even in the absence of answers, be comforted by His promises of peace and rest.

We don’t know what happened when my dad’s heart stopped beating for those heartbreaking 27 minutes. Truthfully, I had not spent a lot of time thinking about it until my daughter’s thoughtful words floated around the dinner table recently. But I do wonder: What will it be like when we see our Lord face to face? What marvelous things will we behold?

“He will wipe away every tear from their eyes, and death shall be no more, neither shall there be mourning, nor crying, nor pain anymore, for the former things have passed away” (Revelation 21:4).

Surely, we will trade brokenness for unspeakable, wondrous joy. 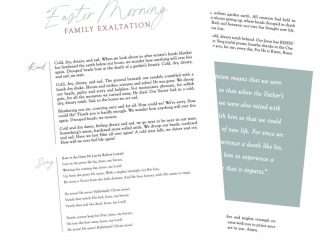 To help you dive a little deeper, we’ve created a beautiful Easter Morning Family Exultation and are thrilled to offer this FREE to our readers. This printable resource is designed to draw you into praise and worship on Easter morning as you reflect on the truth and hope found in Jesus’s resurrection.

Enter your information below to get a copy in your inbox. 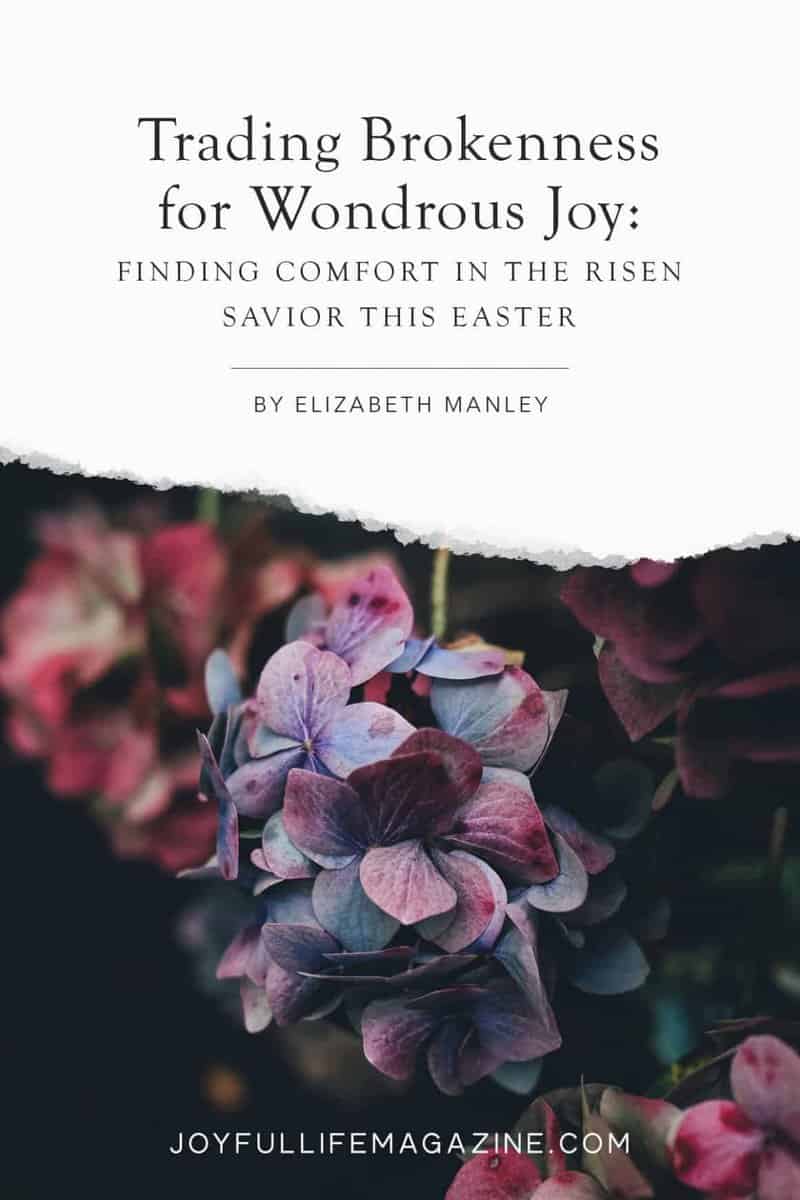 Elizabeth is a writer, poet, pastor’s wife and mom to seven- four in her arms and three just out of sight. She writes on the intersection of grief and faith, and rediscovering life after loss. She is a daydreamer, an unashamed people watcher, and a fierce lover of 1950’s pink tiled bathrooms.