On the nights when dinnertime isn’t a frenzied rush between lessons and practices, our family plays a little game we call “highs and lows,” where each person takes a moment to tell us the best and worst part of their day. Picture our table: my husband, me, our fourteen-year-old son Will, twelve-year-old Kate, eight-year-old Eliza, and our black lab waiting under the table for any scraps that may come her way.

Eliza begins. Her eyes light up as she recounts not one, but usually three or four things that brought her joy. Often she completely forgets to include her lows, or she can’t think of one.

Peter and I take our turns, and then we all look at William. He gets this blank look on his face. If you have a teenage son, you know exactly what I’m talking about. It’s like he has suddenly misplaced his brain and can’t recall a single thing he’s ever done. He sits in silence for a few minutes, scratching his head. Finally, he mumbles a one-word answer, drinks a whole glass of milk in one gulp, and asks what’s for dessert.

Raising my kids to be grateful doesn’t look the same as when they were all preschoolers. The older two balk when I suggest making turkey headbands for Thanksgiving, each feather representing something they’re thankful for. They’re not excited about taking slow walks anymore, noticing all the beautiful and growing things. But that doesn’t mean God isn’t at work and my efforts are in vain. As a mom, I need to continue to pursue my kids, continue to teach them values, even when it takes on a different shape as they grow older.

A good friend of mine has two toddlers. “I feel like I’m constantly pouring into them,” she told me. “Everything is a lesson. Am I teaching them too much?” I shook my head no. The preschool years are full of instilling values through hands-on activities. As my kids have gotten older, I’ve had to change my methods. I can see the scales tipping as I let them make more decisions, let them try and fail and figure it out. It can be tricky to navigate.

Robert Emmons from the University of California, Berkeley, conducted a study on gratitude. He found that “In all its manifestations, a preoccupation with the self can cause us to forget our benefits and our benefactors or to feel that we are owed things from others and therefore have no reason to feel thankful. Counting blessings will be ineffective because grievances will always outnumber gifts.”

He’s right, unfortunately. We don’t have to teach our children to complain. Unfairness isn’t something we have to explain to them. In fact, I’d argue that the propensity for them to find grievances is much stronger the older they get. That’s not the end of the story, though. As parents, it’s never too late to cultivate a spirit of gratitude in our homes.

I’ll be the first to tell you I don’t have all the answers, but I have picked up on a few common denominators. No matter what phase of parenting you’re in, consider following these three guidelines as you seek to develop a heart of thankfulness in your kids:

When our son turned twelve, I took him to Haiti on a missions trip. Two years later, when Kate turned twelve, it was her turn to go. Exposing them to such deep poverty felt risky, but it was well worth it. I watched them interact and form friendships, wrestle with hard questions, and serve in ways that came at a cost. While we were there, my daughter held a party for a group of young girls her age—two who had recently been rescued from sex slavery. When one of those girls spontaneously broke into a song of thankfulness, I knew that sweet Haitian girl taught Kate about gratitude in a way she’d never forget.

But trips to third world countries aren’t always possible. I’ve learned that exposing my kids to any kind of service opportunity expands their worldview, pulling them out of their own existence. I don’t want to shield my kids from the sorrow of this world for the sake of making them comfortable.

Find a food giveaway, a soup kitchen, a rescue operation, an animal shelter. Buy extra school supplies, rake a neighbor’s lawn, take them to visit someone in the hospital or nursing home. Take your kids on as many field trips as you can so they can smell, taste, see, hear, and touch the brokenness of the world.

I spend a lot of evenings and weekends packing snacks and water bottles, sitting in the bleachers and cheering on my kids in their various extracurriculars. I love it and I wouldn’t trade it, but I’m often worried about the ways parents cater to kids, the ways we convince them and ourselves that the world revolves around them. When everything falls by the wayside in order for our kids to jump higher, be smarter, and play better, are we selling them short? How will they ever learn the value of gratefulness if they only see life through the lens of themselves?

How will they ever learn the value of gratefulness if they only see life through the lens of themselves?

In her book, Raising Grateful Kids in an Entitled World, Kristen Welch says, “How often have I given thanks to God or to someone else and then turned around and complained or asked for more with the next breath?” Kids have a front-row seat to your lives. You are teaching them in a thousand different ways, sometimes without saying a single word. Your actions, the way you treat others, the way you communicate—it all counts. They see you posting a complaint on social media. They see the way you talk about your spouse, your mother-in-law, the slow driver in front of you. You are your child’s most important teacher. Your voice is the loudest voice. Are you communicating gratitude?

Before you get discouraged, realize that God’s not asking you to be a perfect parent, He’s asking you to be an honest parent. It’s never too late for grace. Talk to your kids when you struggle and be quick to ask for forgiveness. Let them see how Christ is changing your life. Being open with your own weaknesses can feel vulnerable, scary, and humbling. But can you imagine the impact of allowing your children an opportunity to glimpse God’s transformational work in you? Don’t wait until you have it all together—otherwise, you’ll never begin. Instead, invite them along on the journey.

NAME THE GIFTS OUT LOUD

We didn’t tell anyone the names of our children before they were born. When I first laid eyes on my son and spoke his name to him aloud, it was a sacred moment. Naming is sacred. It was the first job God bestowed on Adam. It’s the same way with our everyday gifts. When we do the work of naming things out loud, it brings life to our souls and redeems the pain. It takes the sting out of our suffering. Ann Voskamp writes, “Our worlds reel unless we rejoice. A song of thanks steadies everything.”

There was a dark time in my life when being thankful came at a high cost. I felt such heavy sorrow over an unexplained loss. I wasn’t sure how I would make it through each day, let alone the months and years. So I started to notice and name. There was sunshine, a text from a friend, a verse that spoke deeply to me, the smiles of my kids. Slowly the light began to shine in my soul again. What I thought had been lost began to return. I didn’t have to choose between the hope and sorrow; I could hold both in my hands.

My kids and your kids are living in a world with big questions and heavy burdens. They know the struggle with darkness, most likely at an earlier age than you and I did. We can’t shelter them from the atrocities their generation faces, but we can teach them to search for good. We can show them the power of naming gifts out loud. We can instill in them the hope of Christ, who brings light into the darkness. It’s a sacred responsibility.

Name the gifts out loud.

Will these three steps ensure you’ll raise successful, thankful, Jesus-loving, grateful children? Sadly, no. But Reggie Joiner says we need to remember that “our influence has more to do with our relationship with our children than it does our skills as parents.” So don’t give up. They may roll their eyes, turn away, or give you an awkward pat on the back. Keep on fighting for their hearts and don’t ever stop seeking Christ on their behalf.

Let the words of Isaiah 40:11 fill your heart with hope: “He will tend His flock like a shepherd; He will gather the lambs in His arms; He will carry them in His bosom, and gently lead those that are with young.” The God who gives good gifts will lead you well. On the good and bad days, on the easy and hard days, He will be gentle with you. Trust in the God who created your children and who calls them by name, to cultivate a heart of gratitude in them. 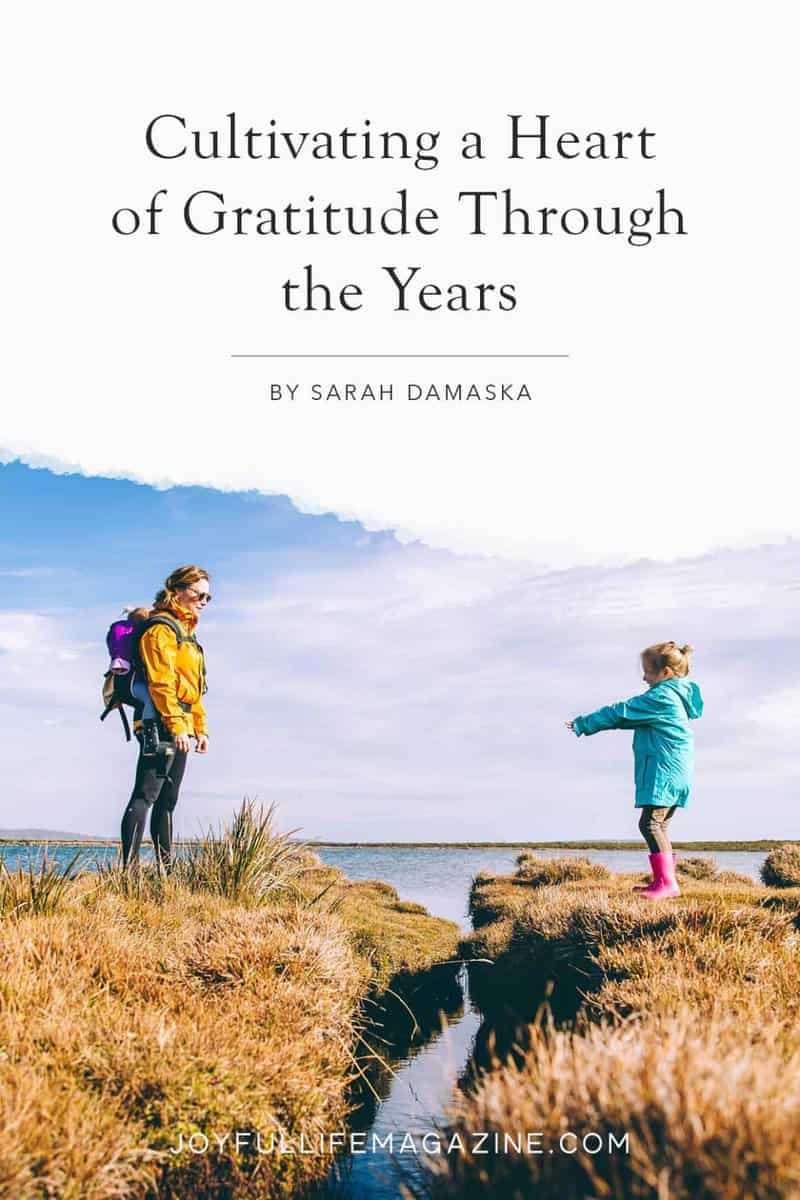 Sarah Damaska lives in rural Michigan with her pastor-husband and three school-aged kids. Shaped by the death of her daughter Annie, she writes on her blog sarahdamaska.com about God’s invitation to live in the intersection of hope & sorrow. You can find her on Instagram and Facebook.