No one told me to test first thing in the morning, when HCG levels are the easiest to measure. I took the test in the late afternoon, workday finished and my husband waiting in our bedroom for me to announce the result one way or the other. With the bathroom door closed, I fumbled with the box, anxiously skimmed the instructions, and somehow missed the step about waiting five minutes before reading the test for accurate results. I was only a day late, but I had a subtle hunch it was no coincidence.

I performed all the steps and set the stick on the counter, waiting for it to reveal the answer.

About the three minute mark, I couldn’t see anything but the control line and I announced as such through the bathroom door. We were both relieved—knowing we could each use some time to adjust to our new marriage of three months before welcoming a child into the mix. I tossed the box and instructions in the trash, and with soap and warm water lathered over my hands, I glanced back at the test and squinted a bit.

Was there another line there? It was faint, but it certainly looked like more than nothing. I could feel my heart rate begin to quicken.

The sudden thought of being actually-pregnant at 22 was both a thrill and a terror.

“Uhhhhhhhhh,” I said with a long, loud, and obviously uncertain tone that compelled my husband to pop open the bathroom door with an inquisitive look.

We both saw it—a line representing a new life that would bring with it a new way of life and a sobering sense of responsibility greater than either of us had previously known.

I was the kind of scared that comes with anything new, full of anxiety about whether or not I had what it took to be a good mother, and yet I knew in my bones that something about this news would also be the best thing that ever happened to me.

I don’t quite recall what I expected motherhood to be like, but I know for certain that I didn’t expect to discover the very limits of my patience, or that it would expose the raw parts of my soul, thoroughly unraveling the threads of my identity with the arrival of subsequent children (of which we’ve since had six and are soon to welcome a seventh).

I didn’t expect God would use motherhood to re-fashion me from the inside out. I didn’t know He would both mercifully and painfully reorient my perspective regarding what it means to love selflessly. I didn’t realize I would discover the essential ingredients of a truly meaningful life.

I didn’t expect becoming a mother would mean assuming the role of a full-time servant and that by doing so, I might discover greater joy than I’ve ever known (even while scrubbing floors and wiping noses for years on end).

He tugged on the blanket from the side of my bed, uttering a few hoarse sounds to rouse me from sleep. When I reached over to pull him into bed with us, I felt his warm, feverish body. When I had put him to bed a few hours before, I heard the beginnings of a cough, and sometime during the night he had spiked a fever.

Then as if on cue—mere moments after crawling into our bed, my sweet boy began throwing up everything he’d eaten for dinner.

Both my husband and I snapped awake, and I flipped on the light to survey the damage. It had narrowly missed me, but it covered the front of my son’s pajamas and oozed down my husband’s forearm, where he had instinctively reacted in his sleep to keep as much vomit off the sheets as possible. Good dad. I sprang out of bed and grabbed two towels, one in preparation to catch any more, and the other to clean up the mess. I rinsed the towels, started a load in the washing machine, and re-dressed my son in stealthy form to avoid waking the other children who sleep near our room.

While I would have loved to remain peacefully sleeping, that middle-of-the-night mayhem was an invitation from the Holy Spirit for me to wake, rise, and tend to the needs of my sick son. This particular night is just one example of hundreds when I’ve been required to do thankless tasks because they were simply necessary. I wish I could say I’ve always done them with a servant’s heart, but the truth is, many times I’ve grumbled and complained about how costly some sacrifices have felt.

Life with children is messy and demanding: a tapestry of laughter, chaos, mess, big feelings, and layers of stress that amount to a rather epic struggle for most moms. Any ordinary day might stir up worry, reveal insecurities and shortcomings, and repeatedly test even the most experienced mother’s patience.

Motherhood is a gritty path of not-so-glamorous stuff, and it has been a treacherous, slippery slope whenever I’ve found myself entertaining the all-too-easy negativity that crops up when I feel exhausted.

There is nothing easy about raising small humans. It requires an unbelievable amount of endurance, decision-making, cleanup, care, and conscientious supervision. It’s not possible to engage all of the above without also feeling a hit to the autonomy I enjoyed in the years prior to motherhood. While most days I feel honored by the opportunity to love these little ones to adulthood, there are also moments when I feel desperate for reassurance that I can do this job with any amount of grace.

It’s a rare day that is smooth and peaceful, without a hiccup or seven, and it is sometimes hard to find joy in the midst of it all. I often find myself daydreaming about what it would be like to not struggle so hard through some of our days together because I have believed the lie that this should be easy—that I should be able to navigate these days without so many challenges.

In some very tangible ways, I’ve believed that some of the humble tasks of motherhood are beneath me. I wouldn’t dare say it out loud, and I might not even admit it to myself without some nudges from the Holy Spirit, but every time I show up at the sink with a negative attitude, or flip a load of laundry over—frustrated that there are so many clothes to wash all the time and this job is never-ending, or I feel anger rise up in me when my kids are doing the most annoying things under the sun, I have momentarily forgotten that none of this is beneath me. All of this is part of my calling as a mother.

If my foremost goal is to make life as convenient and struggle-free as possible, I’m missing the reality that God has not called me to a life of comfort. He has called me to faithfulness and has given me the very daily work of pouring into a family. Motherhood is as much about building my character as it is about caring for children.

Motherhood is as much about building my character as it is about caring for children.

In order to fuel me through the hard days of motherhood, I draw strength and inspiration from the example of Jesus as a servant.

“Have this mind among yourselves, which is yours in Christ Jesus, who, though He was in the form of God, did not count equality with God a thing to be grasped, but emptied Himself, by taking the form of a servant, being born in the likeness of men” Philippians 2:5-7 (ESV).

Mothers know, perhaps better than anyone, what it feels like to be pressed on all sides, to continually empty ourselves, and to hold the needs of their children in tension with other aspects of life.

As a mother, I recognize I have an essential role in tending the daily needs of my children with intention and purpose, and if I hope to mirror the obedience of Jesus as a servant, my days are going to involve sacrifice and surrender that reach beyond the boundary of my comfort.

I expend my energy in order to invest in the bigger vision of raising wholehearted children. I have the influence to steer my children toward the goodness, grace, and generous heart of God, with the hope they might discover the riches of a life yielded to Jesus and the promise of a life hidden in Christ.

I’ve learned it is even harder to point my children in the direction of righteousness when I, myself, am trying to escape the discomfort of following Jesus down the path of servanthood.

“…let us also lay aside every weight, and sin which clings so closely, and let us run with endurance the race that is set before us, looking to Jesus, the founder and perfecter of our faith, who for the joy that was set before him endured the cross, despising the shame, and is seated at the right hand of the throne of God” Hebrews 12:1-2 (ESV).

I feel a profound sense of purpose in these humble days in which I currently find myself. I recognize small things are essential, and they keep our whole family growing in love toward one another and into a deeper understanding of the bigger story we are in.

For the joy set before Him, He endured the cross.

For the joy set before me, I sacrifice comfort, autonomy, sleep, and success to be found faithful in the task of raising my children to grow strong and to know Jesus, and to the best of my ability, I daily demonstrate for them what an obedient, servant-heart looks like in action.

Mothering with the heart of Christ looks like recognizing that there is joy in taking on the role of a servant, humble and lowly, with the understanding that no matter what accolades I have to show for my years of labor, the fruit of faithful motherhood stretches into an imperishable eternity.

Looking for the perfect Mother’s Day Gift? These beautiful cards are hand-painted by Bria Danae Block and are now available in The Joyful Life Shop! Our 4×5.5 spring floral card sets are printed on 100% recycled, biodegradable, matte card stock and pair beautifully with a subscription of the magazine.

The SURRENDER Issue | Summer 2019 is now available for pre-order through The Joyful Life Shop! It will begin shipping May 28th so be sure to order one now. 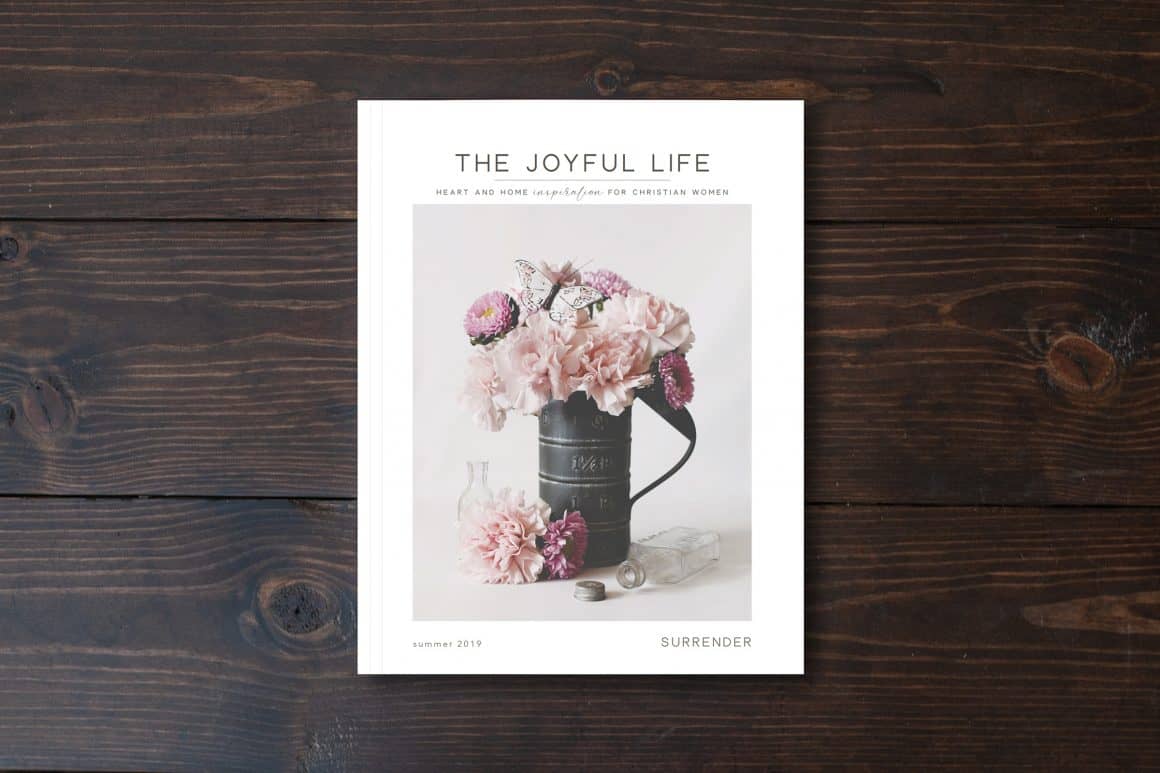 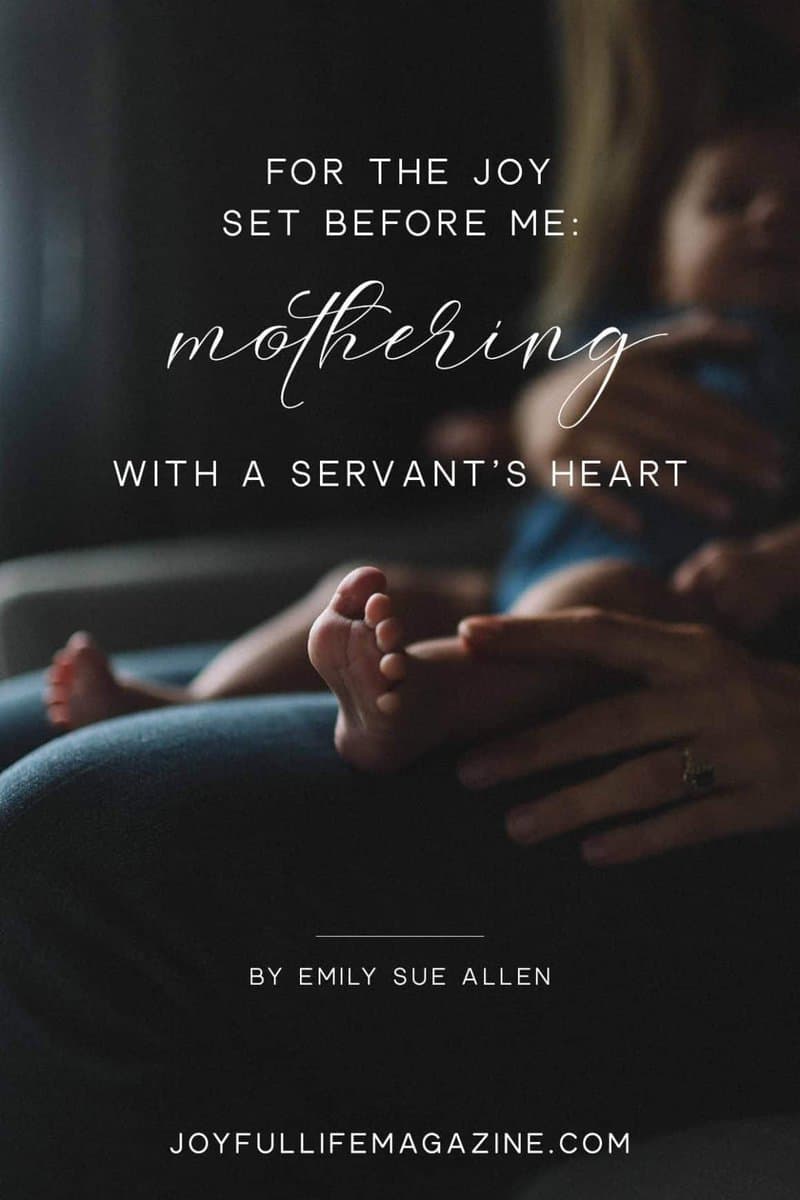 Emily Sue Allen is the founder of the Kindred Mom blog and host of the Kindred Mom podcast. Soul care for moms and helping women find joy in the midst of their motherhood journey are among her greatest passions. She is a contemplative, creative soul who celebrates the beauty of a humble, handmade life and deeply values the power of encouragement. She lives with her husband and six kids in the Pacific Northwest, and personally blogs at emilysueallen.com. Find Kindred Mom on Instagram and Facebook, and follow Emily personally on Instagram.