The last time I spoke to my father I was pregnant with my first baby. It was a few weeks after Christmas and my stomach was stretched taut, all the excitement and fears of motherhood swirling inside me. We did our dance of apology and pretending. He apologized for not being in touch and I pretended it was okay. That was 14 years ago.

The truth is, my father and I never really connected. I always reminded him of my mom, and even as a child, I knew that didn’t bode well for me since he had stopped loving her. I figured it was a matter of time before he stopped loving me too. I guess I was right.

There were years of court-mandated visits and years of progressively decreasing communication. When it came time for my wedding, I told him I would like him to be there, but he wouldn’t be giving me away. It surprised me that he came anyway, and I held hope that it was an olive branch after all the years of taking on water, a desire for a relationship that never materialized.

We tried every six months or so to navigate the ocean between us, but somehow we never seemed to make it work. I was too hurt and he was too proud or angry or something else I could never quite understand. We kept drifting apart and it felt like I was the only one who noticed.

Every birthday without a phone call hurt.

Every holiday without a card hurt.

And finally, I reached a point where I was so tired of hurting I knew something needed to change.

It hurt too much. I was always angry when I thought of him. How do you forgive someone who isn’t even sorry they hurt you?

I’ve discovered it’s one toddling step, one word at a time.

IS THIS REALLY WHAT HE MEANT?

In Matthew, Peter asks Jesus about forgiveness. I picture Peter, looking the Messiah in the eye, questioning Him like a snarky teenager: “Lord, how many times shall I forgive my brother or sister who sins against me? Up to seven times” (Matthew 18:21, NIV)?

In all fairness, I don’t know if Peter had an attitude, but I know I did. I would be hurt or let down time and again by my father, the person who was supposed to take care of me. In my pain and desperation, I’d go to Jesus asking, “How many times do I need to forgive him? I’ve already done it so many times. You saw me. I did what I’m supposed to do. How much more do you expect?”

I bet Jesus’ response surprised Peter as much as it did me: “I tell you, not seven times, but seventy-seven times” (Matthew 18:22, NIV).

It turns out, Jesus can handle snarky, and He can respond accordingly with loving truth.

Seven wasn’t enough, not even close. He would have us take that seven and multiply it by seventy. That’s 490.

I don’t think 490 is a magic number. Rather, Jesus was simply showing us that our forgiveness should far exceed what we may think is fair. That seven times Peter suggested was nothing compared to what is expected of us. Peter and I both thought seven was generous; Jesus has something more extravagant in mind.

He wants us to stretch so far beyond our idea of ‘fair’ that it seems ridiculous. Forgiving 490 times seemed a bit excessive, but I like concrete answers, so I took that ridiculous number to heart. I decided to forgive my father 490 times a day until it didn’t hurt anymore.

The first time I counted every single one, all the way to 490. It took six minutes. That became my measuring stick. Six minutes of saying, “I forgive him,” every single day.

I didn’t feel anything at first. As a matter of fact, I felt a little bitter, the words tasting metallic on my tongue as I spoke them out. Each day I would say the words more out of obedience than anything else, like a kid apologizing when she doesn’t really mean it. Except instead of apologizing, I was forgiving and not really meaning it.

After about a week I felt a shift. I was no longer dreading those six minutes—I was actually looking forward to them. Something in my heart began to change, and I liked how it felt.

I kept on declaring forgiveness each day for weeks and months. Some days it was out of pure obedience, but I increasingly felt meaning behind the words. Over time, I meant them, thinking of specific situations to genuinely forgive him for. Eventually, it felt like I was removing tiny hooks from my heart. Miraculously, after a few months, it no longer hurt to think of him or say his name.

I forgave out of obedience, and it was the most freeing thing I could have done. God transformed my perspective to an extent I never could have expected.

Even in all my newfound forgiveness freedom, there were still pinpricks that would find a tender place. Forgiveness doesn’t harden your heart. It may heal wounds, but scars can remain tender, and life had a way of reminding me of that reality.

As time went on and our paths crossed, I found myself needing to forgive again. The hurt or sadness became a barometer. When I found myself wrestling with those feelings, it reminded me that I needed to practice forgiveness.

So, while I thought forgiveness was complete, a massive undertaking I had finally checked off, I learned, instead, that it was an ongoing process—probably for the rest of my life. Each time I feel a prick in a tender place of my heart, something that brings pain or sadness or anger, it’s a reminder to forgive again in that new place.

God showed me that though He uses it for His glory, He never delights in the suffering of His children. He promises to be with us when it is required but it isn’t always required. We don’t need to put ourselves in a self-imposed prison of suffering in the name of forgiveness. I believe God wants more for us than that.

We don’t need to put ourselves in a self-imposed prison of suffering in the name of forgiveness. I believe God wants more for us than that.

It is always appropriate to forgive. Reconciliation is a different story.

God showed me how to separate the forgiveness and reconciliation that I once held so close together. Once the layers of anger and hurt were removed, I could see that forgiveness and reconciliation are two different things. God gently revealed that while He always calls me to forgive, reconciliation may not look the way I expect. Sometimes, it may even mean moving on instead of staying in a destructive place. He continually helps me make the distinction between these, and each time brings new freedom within.

God gave me what I needed in order to forgive. He still does. And He released me to let go of the need to reconcile.

Sometimes He calls us to reconcile, and sometimes He gives us the ‘okay’ to let go. When we press into Him in full obedience, we can trust that He will guide us each step of the way.

Whatever you are facing today, no matter how impossible it may feel, God can give you the strength to forgive, one word at a time.

Get an exclusive gift for Joyful Life Magazine readers here! 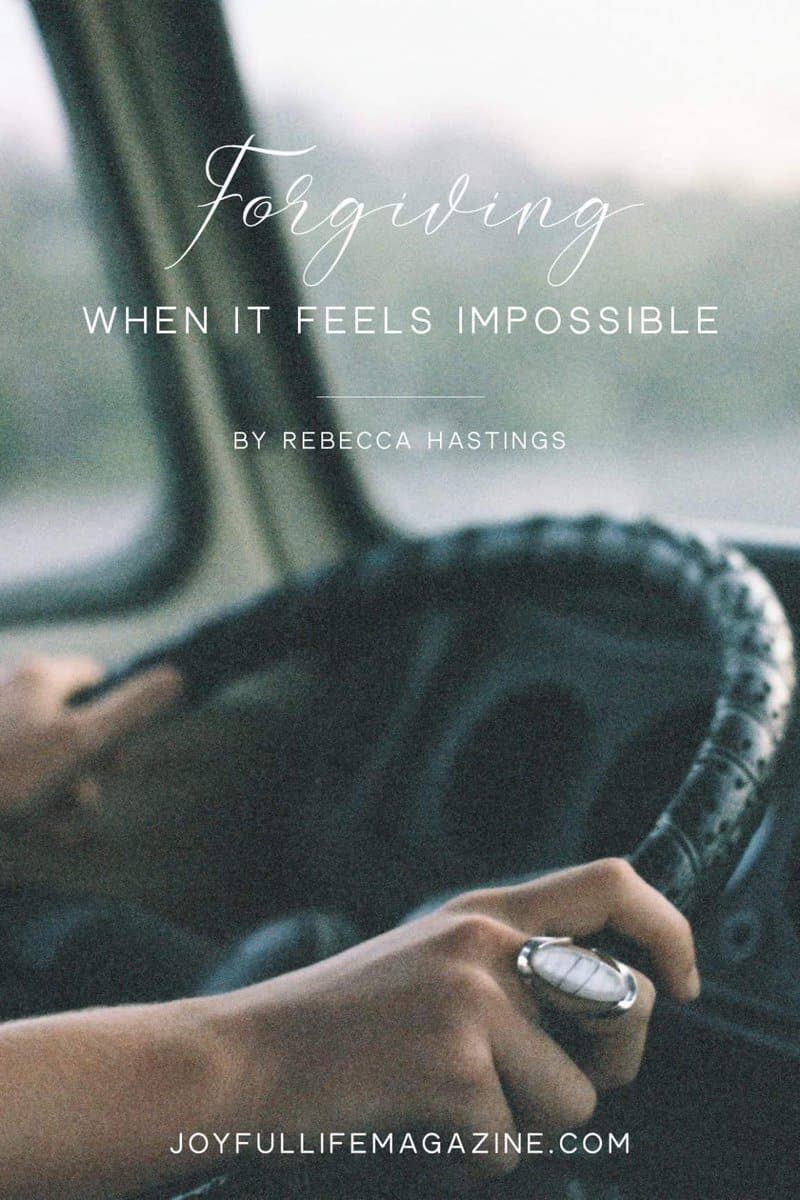 Rebecca Hastings captures hard, uncomfortable, often unspoken feelings and brings light, honesty and God’s truth to them in a relatable way. A wife and mother of three in Connecticut, her new book, Worthy: Believe Who God Says You Are

, is available on Amazon. You can read more from Rebecca on her personal blog at rebeccahastings.net.