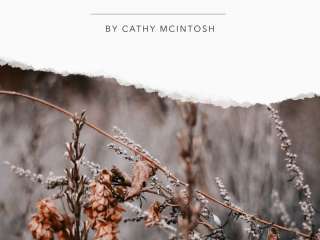 We’re commanded in the Scriptures to repent—a practice of untangling our lives from sin so that we can find wholeness, walk with the Holy Spirit, and live fruitful lives. While the idea seems simple, the process of repentance isn’t as clear-cut as we often hope. In this article, Cathy McIntosh shares her vulnerable journey of true repentance, from being trapped in a cycle of fear and shame to ultimately bearing the beautiful fruit of repentance in her own life through Jesus’ abundant grace.

There were stories we had never shared. Intimate family stories about heartache and healing, marital struggles and adultery, reconciliation and wholeness—stories our kids knew nothing about.

They were aware only of life—after. After long absences of separation, after turbulent roads of reconstruction. They knew a life of faith which, for them, was always so. Inside their bubble of reality were parents who were stricter than others in the neighborhood, who prioritized church, and tuned their car radio to songs about Jesus instead of boy bands or Britney Spears.

Holding confidently to the tight unit that molded them into who they were, they never perceived the intense spiritual battles that threatened to devour our family. They were blissfully oblivious to our wielded swords and shields, helmets and breastplates. Our Heavenly Father had guarded them well in the slumber of innocence.

A Moment of repentance

I had asked God countless times how and when to tell them. After so many years, I began to wonder if I ever would.

They’d grown into adult-sized people in budding relationships, each about to chase their dreams and face battles they’d need to fight on their own. In a rare moment when we sprawled together over the cushions of our huge sectional, I felt the Holy Spirit whisper, “Now.”

My tears seemed like a random interruption to our lighthearted afternoon, but soon made sense as the words poured out and I confessed the entire story of pain and victory.

For me, it was the crowning moment of repentance.

UNTANGLING OUR LIVES FROM SIN

Sin has a way of interrupting what’s pure. It separates us from what our spirits desire most: a constant connection to God. It breaks our communion with Him and dulls everything it touches.

But in His mercy, Jesus provides a way for reconciliation. He gave His life as an atoning sacrifice, as the ultimate payment for our penalty. It is His gift to us—one we must accept by grace through faith.

We’re commanded in the Scriptures to repent—a practice of untangling our lives from sin so that we can find wholeness, walk with the Holy Spirit, and live fruitful lives. While the idea seems simple, the process of repentance isn’t as clear-cut as we often hope.

English definitions of repentance emphasize regret or remorse. As Christian women, most of us embrace these emotions well. We have no trouble condemning ourselves for every fault we see, whether real or imagined.

Biblical illustrations of repentance go far deeper. According to Strong’s Concordance, the Greek word metanoeo means to think differently afterward or reconsider; morally, to feel compunction or unease. Scripture shows evidence of changing more than just one’s mind. To reach true repentance we must also have a change of heart.

Sadly, like many Christian women, I was trapped in a vicious cycle that held me from true repentance for far too long. I was only part way there.

My mind and actions had turned; I no longer walked in this sin and deeply regretted what I had done. But in my remorse, a seed of shame crept into my heart and began to sprout and grow until it cloaked me in worry and gripping fear. All of these emotions were part of the repentance process, but instead of working through them, I became paralyzed by them.

My heart was consumed by the fear of failing God again and causing more pain to those I love. My prior actions wounded those closest to me. I couldn’t shake the fear of letting them down again any more than I could travel back in time and stop my sin before it happened.

The change of mind—the first part of repentance—was easy to achieve, but I was held there, beleaguered by obsessive and unhealthy thought patterns, engulfed by regret.

Looking back, it was obvious I needed to move toward the next phase of repentance and experience a change of heart. But at the moment, I couldn’t see it.

While we can often muster the strength to behave differently when we know we are on the wrong path, it’s the Holy Spirit who prompts a change of heart—the true repentance that bears fruit.

Our hearts, spiritually speaking, are considered the seat of our emotions. When we have a change of heart, it implies that we change the way we feel about something.

There’s a vast difference between feeling sorrow of this world—for example, being sorry you got caught, or sorry you hurt someone you love, or sorry you have to face consequences for your actions—and godly sorrow, where the magnitude of our sin against God becomes obvious.

King David provides a helpful example. When he was rebuked by Nathan for killing Uriah and taking his wife (2 Samuel 12), he experienced a change of heart. Through the biblical narration, we’re allowed a peek into the room when David suddenly perceived the depth of his sin. Godly sorrow gripped his mind and his emotions as he realized he had sinned against the Lord.

Later in Psalm 51, David poured his heart out to God, beseeching the Lord for forgiveness and asking to be cleansed from his sin. This is godly sorrow, a vital element in the progression of true repentance. It’s here when we see David’s repentant heart. His broken spirit is a sacrificial offering that unleashes the Lord’s mercy. His change of heart shifted his focus from the magnitude of his sinful nature to the beauty of God’s redeeming grace.

STEPPING OUT OF THE DARKNESS OF SHAME

I saw my own sin as an ugly disgrace. I didn’t talk about it and wanted to keep others from seeing this horrific side of me. As I sheltered my secret, my actions became the only lens through which I could view myself.

Different from guilt which says, “I made a mistake,” my disgrace spiraled into shame which led me to believe, I am a mistake. I fully believed myself to be tarnished goods, and accepted the mindset as one I’d live with forever. But believing those thoughts didn’t make them true. Although I couldn’t see it at the time, I was still a beloved child of God.

It was many years later when an unrelated yet jolting event occurred in our life. There often comes a time as parents when we must helplessly watch our maturing kids reap the consequences of their actions. As our family events unfolded, I placed every ounce of blame firmly on my own shoulders. If I weren’t such an awful person, we could have avoided this whole ordeal. It triggered an overwhelming breaking point, and I knew I needed help.

Through months of pastoral counsel and constant prayer, God finally gave me a glimpse of the truth. He brought me back, full circle, to confront the lingering shame of my sin which proved to be the root of my current undoing.

God massaged my heart until I could finally agree with Him about my sin. Yes, it was hideous and harmful, but no sin—including my own—was too ghastly for the redemptive and finished work of the cross.

Hebrews 12:2 encourages us, “fixing our eyes on Jesus, the pioneer and perfecter of faith. For the joy set before him he endured the cross, scorning its shame and sat down at the right hand of the throne of God” (NIV).

As I leaned into Jesus, I felt as if He met me in the darkness of my shame and patiently sat with me there. He’d already endured the cross, scorning its shame, and was the only One who could help me cast off my own. He showed me that my sin didn’t diminish His love for me, that I was redeemed and clothed in His righteousness.

It was a painful, yet beautiful process of healing that led to the freedom that true repentance brings.

BEARING THE FRUIT OF REPENTANCE

We’re to bear fruit in keeping with repentance (Matthew 3:8). In many teachings, we are told that to repent means to stop on the path toward sin and turn away. To do an ‘about-face’ as it were. Biblical illustrations, however, show us there is more to it.

True repentance involves our hearts as much as our minds and actions. While we can often muster the strength to behave differently when we know we are on the wrong path, it’s the Holy Spirit who prompts a change of heart—the true change that bears the fruit of repentance.

With a change of heart, we agree with God in two very important ways:

When we embrace these truths, our lives reflect the redeeming sacrifice of Jesus. God will use our sin for good, in spite of the destruction that the enemy of our souls intends. As the cliché says, our mess becomes our message and our test becomes our testimony. We’re no longer shackled by the shame of our sin but equipped to lead others toward freedom.

The fruit of repentance: freedom

The day I dropped the bombshell on my kids was a day of newfound freedom for us all. As it always does, waiting on God’s timing proved best. He had miraculously prepared their hearts to hear the truth, which was evident by their merciful responses.

Their anger would have been justified, but they showed kindness instead. My words could have cut their tender hearts, but God guarded them with shields of faith. They could have hated me, but they chose love.

Now we talk more openly about personal matters and see one another as we really are: sinners saved by grace. Together we bear the fruit of repentance and serve our loving God through every part of our family story.

This article originally appeared in

of The Joyful Life Magazine 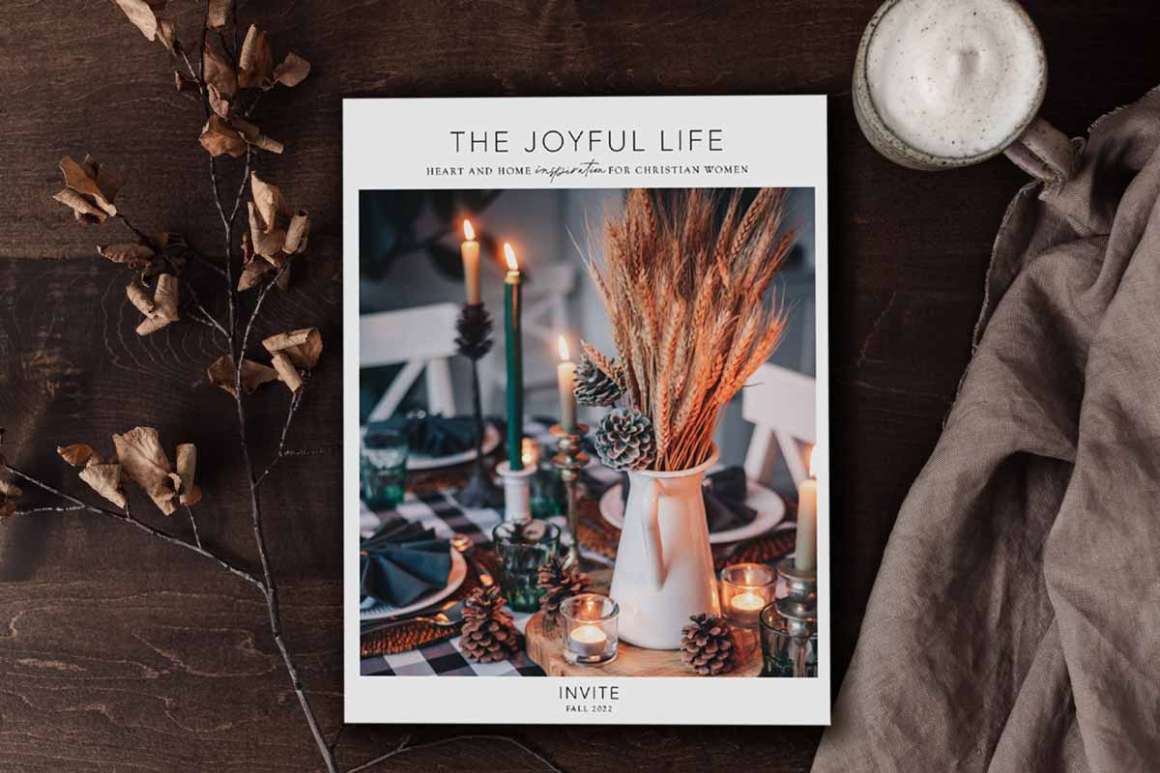