“Why would God want me to have a Winnebago?” the pastor demanded.

It was my first quarter at my new college in Seattle, and I was visiting different churches each weekend trying to find a place I might fit. That particular Sunday, I joined a friend at a tiny church led by an impassioned young preacher. Though I have long forgotten the primary point of the sermon and I couldn’t tell you where that church is located or what it’s called, I don’t think I’ll ever forget how he talked about his dream of owning a Winnebago motorhome.

When he first brought up the topic, his eyes were bright and his speech excited as he described the Winnebago’s prized features. But then he started criticizing his dream, saying how ridiculous it was. As his tirade progressed, his eyes dimmed and his demeanor became depressed. By the time he asked why God would ever want him to have a motorhome, it was obvious the question was rhetorical. Though he ardently wanted a Winnebago, he apparently could see no reason why God would ever approve of his wish.

All these years later, I still remember the weight of disappointment in the air as the pastor disparaged his own desire. And I still remember the unspoken-but-oh-so-clear message that our desires don’t matter. That they are frivolous at best and, in the worst-case scenario, are evil distractions designed to disrupt God’s plan.

I don’t think these beliefs are uncommon. Many of us tend to have the feeling that, as author Emily P. Freeman puts it, “If it’s something I really want, then it isn’t something I should be allowed to have.”

But if this is true, what should we make of verses like Psalm 37:4, which says: “Take delight in the LORD, and he will give you your heart’s desires” (NLT)?

And what about Psalm 103:5, which describes God as the One who “satisfies your desires with good things so that your youth is renewed like the eagle’s” (NIV)?

These verses declare that when we’re delighting in God—enjoying Him, worshiping with Him, obeying Him—He will fulfill our desires. Why would God give us our heart’s desires if they are unimportant or if they are troublesome temptations drawing us away from His plan?

I’ve spent a lot of time grappling with this question. After studying what the Bible says about desire, I’ve become convinced that rather than impulses to be repressed, our desires are often one of the clues God uses to reveal what He’s calling us to do. The first chapter of the book of Haggai is a perfect example.

DRIVEN TO ACTION BY DESIRE

In 538 B.C., a group of Israelites returned to Jerusalem from their exile in Babylon in order to rebuild God’s Temple. Within two years of returning home, they completed the foundation of the Temple.

But, then, instead of continuing with the reconstruction project, the people got distracted with building homes of their own. Nearly two decades after their return from Babylon, the Temple was still in ruins. So God sent a message through Haggai. He told the Israelites the reason their harvest was sparse and they were lacking in basic necessities such as food and clothing was because they had gotten their priorities out of order. If they wanted to please Him and restore their prosperity, God said they must “Go up to the hills and bring wood and build the house, that I may take pleasure in it and that I may be glorified” (Haggai 1:8).

When the people heard this, they took the message seriously and the Bible tells us they started seeking and worshiping the Lord in earnest.

The Israelites had lost all interest in the assignment God had given them, but once they started listening to God and turned back to Him, God “stirred up” their spirits. Other versions translate “stirred up the spirit” as “sparked the enthusiasm of” (NLT) and “gave them a desire to” (TLB).

God, in His graciousness, supplied the desire and the passion for the work that needed to be done. The people’s desire was the very thing God used to move them into the assignment He had for them. It’s no different for us today. In His goodness, God plants within us the desire for the specific things we need to do to fulfill His purpose in our lives.

Instead of automatically discounting your desires, take time to consider the possibility that those yearnings just might be God’s Spirit guiding you into your next step.

IS GOD GIVING YOU A CLUE?

What’s stirring in your heart? What do you feel enthusiastic about? Could the reason you have that desire be because God actually gave it to you?

Instead of automatically discounting your desires, take time to consider the possibility that those yearnings just might be God’s Spirit guiding you into your next step. No matter how unusual your desire is, you never know how God might use it.

Remember the Winnebago-loving pastor? I don’t know where he ended up, but last summer a family of seven came to minister at my church. Their mode of transportation? A motorhome! Their unique mission from God in this season of their lives is to travel around the country in their motorhome spreading the gospel and ministering in churches, and it was evident from their visit that they are partnering with God in a powerful way. So even a desire for a motorhome can be from God!

Don’t let the Devil convince you that God wants you to have a boring, desire-free life. Our good Father is more creative, more loving, and a lot more fun than we can imagine. While it’s true not every desire is from God, He has given us the Holy Spirit to help us discern which desires to follow and which to dismiss. As you prayerfully assess your desires, trust God to lead you into amazing adventures for your good, the benefit of others, and God’s glory! 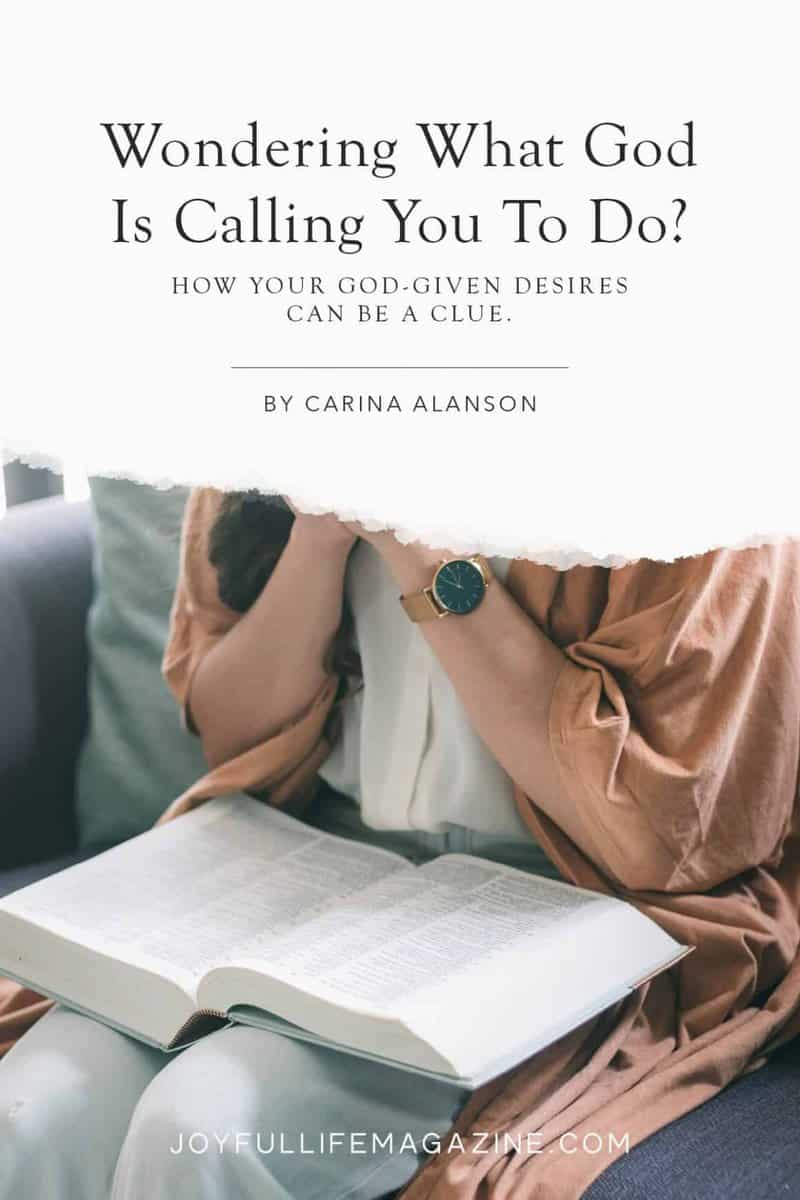