It was Sunday morning, and I knew I looked as awkward as I felt. I groaned inwardly and tried to paste on a convincing smile. We had rushed out the door late and, well, let’s just say I had a headache and was pretty sure my son smeared something on the shoulder of my dress. I felt my mom status keenly. Instead of the church lobby being a peaceful haven after a busy week, I cringed at the thought of potential scrutiny. As I greeted church members with a stuck-on smile, my mind was whirring with what-ifs. Am I sending out stressed vibes? Are they noticing that my kids’ hair isn’t brushed? What if they think I’m a bad mom? Worse yet, what if they feel sorry for me?

My husband raised one eyebrow at me and reached to take the baby. “You okay?”

“Not really,” I said through my smile.

Restraining the urge to roll my eyes, I turned to give a friend a hug. As we chatted, my eyes flitted to her oh-so-on-trend outfit and perfectly styled hair. A little shocked at the twinge of jealousy, I pulled my attention back to her story and hiked that forced smile a little higher.

Later that afternoon, the house was finally quiet and my cozy blanket and cup of tea had worked wonders with my headache. My husband wandered in from the kitchen. “How is so-and-so doing?” he asked, referring to the friend from church.

“Um—she’s fine, I think.” Reality doused me like cold water. I couldn’t remember! Our whole conversation was nothing but a haze in my mind—and I knew the reason why. Lord, what kind of opportunity did I miss this morning? I immediately picked up my phone to send her a text, but a thought nagged me. When will I learn? This isn’t the first time I’ve let myself get in the way.

In the past, I’ve been tempted to rationalize awkward relationships because I’m naturally introverted and have always been shy. Sometimes I chalk it up to being insecure. But if I’m honest, it was pride that put a stranglehold on my ability to be a friend that day. Have you ever been there? Sometimes we don’t even realize we’re focusing on ourselves at the expense of others. Pride is a master of disguise. It often poses as something innocent, even understandable. It can look like quiet reclusiveness or the life of the party. But in reality, no matter what form it takes, it holds us captive.

Philippians chapter two has been one of my favorite passages for years. But this particular afternoon it was as though there was a magnifying glass over the words. The Apostle Paul exhorts the church at Philippi, “Do nothing from selfish ambition or conceit, but in humility count others more significant than yourselves. Let each of you look not only to his own interests, but also to the interests of others” (Philippians 2:3-4). I could tell you that I felt very insignificant in that church lobby. But the truth is, in my mind, I was the biggest person in the room.

We don’t have to look far in our culture to compare ourselves to others. It has been a reality since the Fall. But now, with the world and social media at our fingertips, it is easier than ever to fall prey to comparison. The good news is that counting others as more significant than ourselves does not mean we must measure ourselves against the way they raise their kids or their Pinterest-perfect living room. Maybe, just maybe, counting others as more significant means having the courage to fight our fear of judgment.

Maybe it means intentionally thinking of others’ needs as more worthy of attention than our own.

Or approaching our friendships with a heart to give, not a heart that is on guard to protect our own image.

The God-breathed words penned by Paul in Phillippians 2:4-8 continue, driving conviction even further into my heart. “Have this mind among yourselves, which is yours in Christ Jesus, who, though he was in the form of God, did not count equality with God a thing to be grasped, but emptied himself, by taking the form of a servant, being born in the likeness of men. And being found in human form, he humbled himself by becoming obedient to the point of death, even death on a cross.” This is the God who washed His disciples’ feet—His friends’ feet. When He rose up from the table and girded Himself with a towel to perform that lowly task, He knew that the Father had already given all things into His hand. (John 13:3). All things! He was God. He wasn’t threatened by what they might think. He knew His identity as the Son of God, and thus He was free to serve.

We are sinful, broken people. We have nothing to offer except what has been given to us. But as His children, we are cherished—treasured lavishly—our names, written on the palms of Almighty God. We are people who Christ delighted to save—loving us to the point of giving His very life to make us His own. And when we were incapable of loving Him in return, He still looked upon us and said “Mine!” This is the breathtaking beauty of the Savior we serve. Here and only here is our identity found—not in how those around us perceive us, not in our appearance, not in how well we perform as wives or mothers or friends. This is who we are in Christ. Nothing on earth can separate us from our Father’s unfailing acceptance. Even if everyone rejects us, we are eternally accepted by virtue of Christ’s sacrifice on our behalf. Loved with such a love, we look to the cross—the symbol of grace so powerful it changed stone-dead hearts, captive to pride, into living flesh.

And we have the awe-inspiring privilege of mimicking Christ’s mind and heart in our relationships with others.

The most joyful, beautiful women I know live to bless others. When they smile, I see Christ, and I know that I won’t be judged by them, only welcomed with open arms. Their personalities differ greatly—one is given to soft-spoken gentleness, another is full of spunky humor and vivaciousness. But they have this in common: They give of themselves, expecting nothing in return. In their humility, they would never admit it, but it is obvious to all that their joy and confidence are found in Christ.

When we turn our hearts to the cross and strive to understand what it means to have the mind of Christ, self fades into the background and we are free to focus fully on nurturing those around us. Personally, I realized that only then am I free to be myself, and it doesn’t matter how I measure up to anyone else. After all, the most beautiful version of myself is someone who radiates Christ.

After all, the most beautiful version of myself is someone who radiates Christ.

This can show itself in very practical ways. Instead of walking into the church lobby worrying, I can choose to walk in looking for another who might be feeling insecure. I can take time to look into their eyes, see their needs and make the effort to foster a connection. This may look like giving a smile or a hug to an acquaintance who would normally be overlooked. Perhaps it could even involve steering a conversation away from what I did this week to ask, “Have you been doing okay lately?” This simple shift in focus can often open more doors than the automatic “How-are-you-I’m-fine-how-are-you?” routine we’re all so accustomed to.

A heart for cultivating gospel-focused friendships seeks to be a safe place for friends to share their struggles. In the spirit of Philippians chapter two, we can look out for the interests of others by giving from open hearts and listening without jumping to give advice or commentary too soon. We can strive to create a judgment-free, comparison-free, competition-free zone built on the foundation of grace.

Let’s be brave friends who dare to make ourselves vulnerable. Let’s take courage and make the effort to approach our relationships with a gospel focus—remembering who our Father is and what He has done for us, and helping others do the same. Living this way requires constant choices to take our eyes off ourselves and align our hearts with our great Example, but let’s strive to stand in awe of the cross every day. Let’s seek to point others to Christ and mirror His overflowing love. Today, let’s be encouraged and confident in our identity in Christ because this is what makes us free to love. Together, we can nurture the unique gift God has given us called friendship.

The CULTIVATE Issue | Don’t miss your chance to order our Fall 2019 issue!
Order through The Joyful Life Shop! 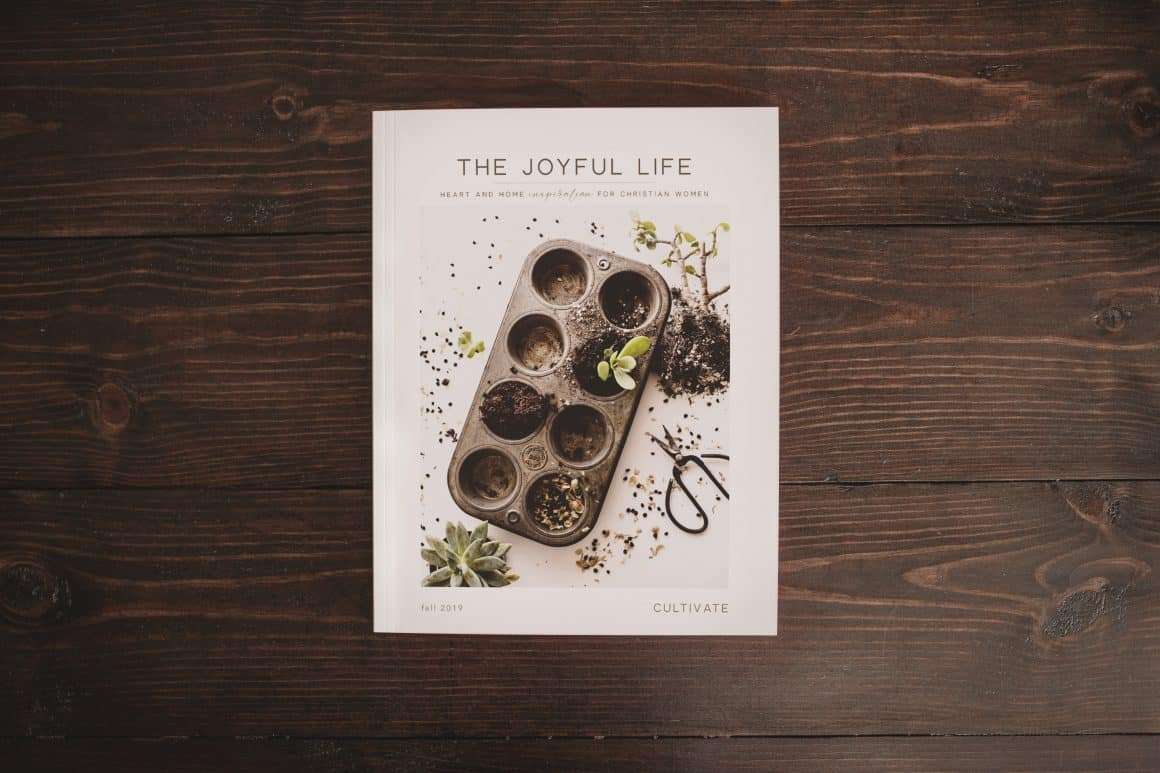 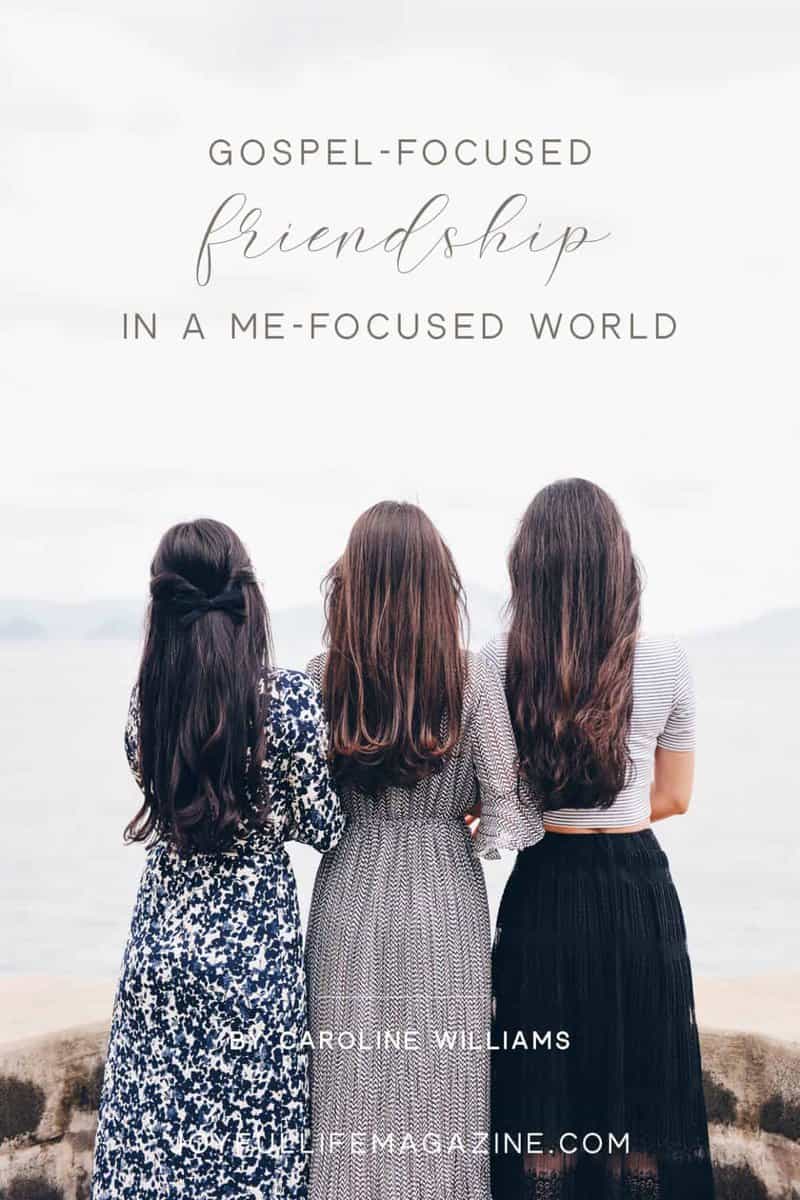 Caroline Williams lives in Baton Rouge, LA with her husband and son. When she is not embarking on adventures with her two favorite people, she can be found blogging, teaching music, and sipping tea while doing her best to conquer a towering stack of books. She is amazed by the grace of God toward such an unworthy sinner, and prays that the Lord will use her to encourage others on their journey. See more from Caroline on her website.