Can I make a confession? I don’t make my bed. At least not on a daily basis.

I’ll make it if I’m really trying to clean, but generally, it is left disheveled and nap-ready.

I blame my mother.

Oh, she taught me how. From an early age, she showed me how to smooth the sheets and blankets, arranging the pillows just so. Eager to be a helper, I once practiced in the middle of the night around the age of five. I was so proud of my neat and tidy work that I woke my sleeping father to show it off. With a “Good job,” he promptly undid all my hard work and tucked me back in.

Still, the daily ritual never took. And it’s all because of my mother.

When I hit the formative years of junior high and high school, Mom began to make my bed for me. Many afternoons or evenings when I would get home exhausted, from any number of teenage extracurriculars and activities, I would find my bed neatly made.

And I would know that Mom had prayed over me that day.

This was the rhythm she had fallen into as a mother to four. She would make each of our beds as she prayed for us.

The feeling of peace I associated with a neatly made bed is something I carried with me as I got older. Yet I hadn’t really understood the profound fullness of what Mom did for me by that simple gesture until recently, as I’m now raising three kids of my own.

The first day my older two went to school all day, and I was left alone (pregnant, but basically alone), I was restless. It may have been the jitters that come with too much coffee, but I found myself pacing and worrying. Would their shoes feel okay? Would my four year old be able to carry her lunch tray? All of the ‘what ifs’ flooded my mind. In the too-quiet house, I aimlessly wandered, fueled by nervous energy. My hands looked for something to keep them occupied—to pass the time.

With both of my kids under the care of not me, I was acutely aware of the inevitable letting go.

Pacing the house, performing menial tasks along the way, I eventually found myself standing at the foot of my son’s bed.

My hands took over, and I began to work. Straightening his sheet, and spreading out and smoothing his blankets, I prayed for him. I asked God to watch over him, to make him brave and kind. To help him focus on what he was supposed to do and to keep him safe. Above all, that he would remember that Jesus is always with him. I propped his teddy bear on his neatly folded blankie. Amen.

Then I went to my daughter’s room and did the same.

I didn’t do this with intention. I didn’t immediately know what I needed to do in my anxious worry spiral. There was just something from deep within that drove me—a reflex that had been inherited though had not yet manifested. Until that morning.

The seeds that had been planted in me in my youth by my praying mother began to grow.

I don’t know the content of the prayers she had whispered over my place of rest those many years ago, but I’m inclined to believe God’s heart is generous to the pleas of a praying mother. My cotton sheets and quilted comforter became the altar for a mother’s prayers over her child.

1 Thessalonians 5:17 admonishes us to “pray without ceasing.” My mother embodies that verse. She prays before meals. She prays as she drives. She asks God for parking spots and clear roads. She prays over her grandchildren’s boo-boos and to find her lost keys. She prays for women’s wombs to open and for bank accounts to be sufficient. She prays for hearts to change and for God to show up. She prays with strangers. She prays with those she holds most dear.

She prays continuously, and brazenly.

She prayed for my father as he battled cancer, anointing his head with oil and proclaiming healing over him. When the oil stopped working, and the prayers seemed to bounce off the ceiling, still she prayed.

This is what has been modeled for me and spoken over me.

As I get older, I find I have more to pray for. There is nothing like motherhood to point out just how helpless you are. While my love is deep and profound, it is too human. Too wrapped up in fear and weakness. A mother’s love is not sufficient to instruct, help, sustain, instill, or redeem everything.

So, I call on the one who IS love.

I think it’s probable that my Mom’s prayer life looked different in her younger years. I’m inclined to believe this is something that took time and practice for her to grow into.

My prayer life right now does not look how I want it to look when I’m 80, when my hair has gone gray, and I am stooped with age. By then, I hope that prayer has become as reflexive and as natural as breathing.

At present, I would not call myself a ‘woman of prayer.’ That title, I feel is reserved for women like my mother, my Grandmother, and women whose prayers have intersected with my life as constantly as a heartbeat. As committed as I am to reaching that point of a prayerful life, I am equally committed to being patient with myself.

I admit that prayer is something that I have a complicated relationship with. Sometimes I’m suspicious of it, and sometimes I even deem it pointless. I feel unable to shake the times where I have stormed heaven’s gates asking for a miracle. I have wept, pleaded, claimed Scripture, and believed with all of the faith (much larger than a mustard seed). I’ve prayed good, honest, gut-wrenching prayers—prayers not only for myself, but for others who were suffering.

There is something about some of the ‘no’s’ God has given that haunts me. Suffering, pain, and death seemed to win. I don’t have the answers, and the answers that I do have aren’t good enough.

This is why I have long identified with the Psalms. I love the poetic language and messy emotions, that the Psalmist can go from pointing his finger at God saying, “You are the cause of my suffering,” to “I’ll praise You forever.” I have found my prayer life to be remarkably similar. I can question. I can rage. And God can handle it.

Prayer, in its truest form, is a place of pure honesty. God’s presence quickly vaporizes any mask I try to wear. My bare face, whether contorted in rage and grief or beaming with joy, is unfailingly met with a knowing nod and a gentle hand on my cheek.

Prayer, in its truest form, is a place of pure honesty. God’s presence quickly vaporizes any mask I try to wear.

Still, I persist. Because it’s that hand on my cheek that I yearn for. That connection. That constant reminder of how known and loved I am. I want to be a woman of prayer.

As I keep practicing in the pursuit of this prayerful life I long for, I am learning to become attuned to the nudges toward prayer and lean into them readily.

By doing this, I have fallen into some habits that work within the rhythm of my life. As I wait for the school bus with my two older kids, looking for that flash of orange to come down the road, we’ve formed a daily prayer ritual. At the end of our driveway, I’ll gather them in my arms and say a prayer. Yes, this ritual is for them, so that they can be reminded of the unseen God who sees them completely, but it is also for me. It is a daily surrendering of them into the hands of their Heavenly Father.

There’s also something about the back of my youngest daughter’s neck that calls me to prayer. Perhaps because she is a sweet, daily reminder of one of God’s most generous yeses to me. That sleepy moment before laying her in her crib, where she leans her head on my shoulder, I put my nose in the back of the roll of her neck and inhale. Something in that breath draws my mind heavenward and prompts me to utter words of thanksgiving to our Maker and plead for blessing upon her future.

There is power in learning to pay attention to these prayerful instincts, to lean into them, and give in to the Holy Spirit’s prompting. This is where prayerful habits can begin to form.

This prayerful habit still feels too big on me. I have some growing to do. I wish I prayed better for my husband. (I should probably start making our bed.) I wish I were more faithful to journal prayers—it was a steady practice of mine for many years but one that has lapsed as of late. Maybe in part because of the busyness of our household, though perhaps because I’ve found more fluidity in my prayer life. Back when my season was more conducive to putting physical pen to paper, I would cry out with a hurried hand for wisdom, guidance, and comfort. Some entries are nearly illegible, written in a flurry of emotions. Some are easier to read, thankful in tone, written with the steadiness of peace and contentment. I do hope though that there will come a time where I will journal my prayers once again.

No matter how I pray or how often, that hand on my cheek is always so loving and so gracious.

That grace remains even when I don’t make my kids’ beds. Or when I hurry them onto the bus without gathering them close and sending prayerful breaths down their necks. I don’t have to beat myself up for the times I don’t pray or for not measuring up to whatever standard of prayer I have set for myself.

I am growing into it.

This is why I find myself standing at the foot of a stuffed-animal-covered bed, with blankets in hand. This is a reflex birthed of love—a habit I so want fully formed and implemented.

Yes, I’m growing into it, this inheritance of prayer. An inheritance prayed into my life by my mother, but one I can fully claim because of who my Father is. An inheritance I pray that my children will one day step into.

Maybe my kids will never learn to make their own beds. And I’m okay with that. Especially if it means they will know what it’s like to rest their bare cheek onto a tender nail-scarred palm. 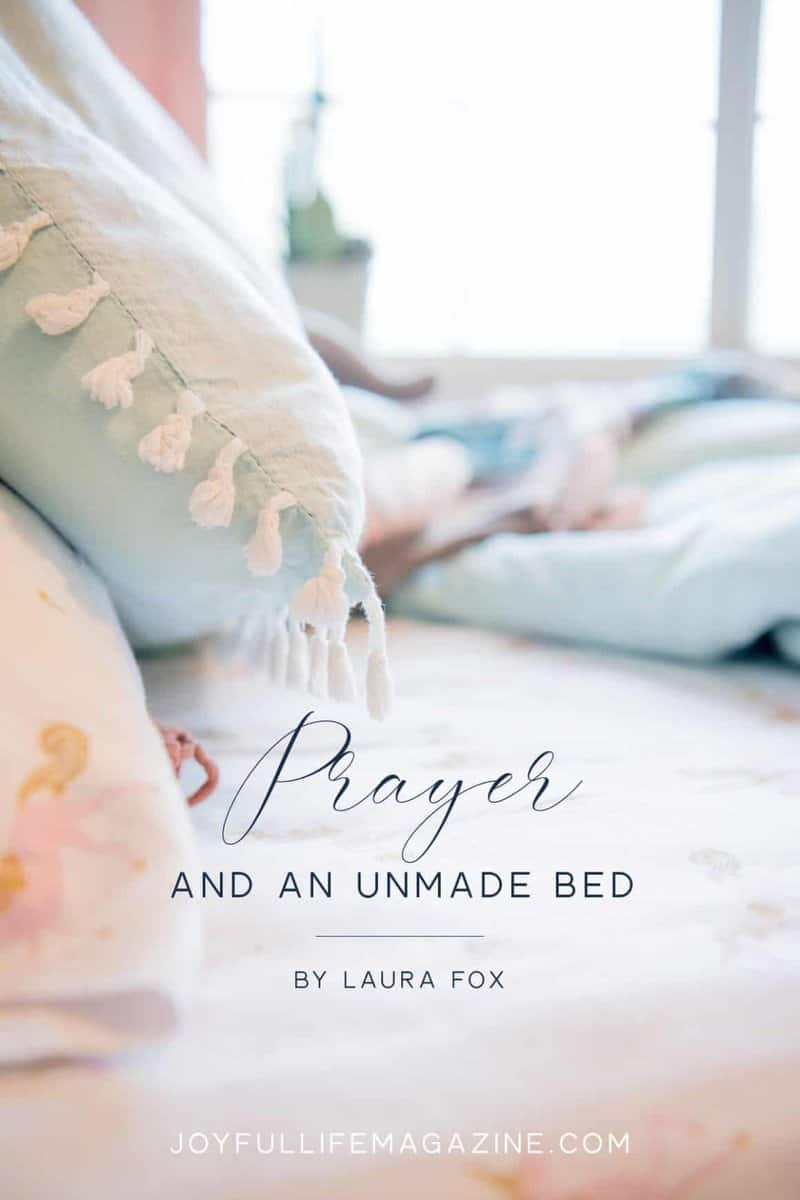 With roots all over the U.S. and Canada, Laura Fox has found herself transplanted to the deep south of Georgia. There she lives with her husband C.J. who serves in the military, and her three children. She began writing to grieve the loss of her father to cancer, and continues to write as a way to commune with her Savior. In her spare time she dreams of a full night's sleep and uncluttered countertops. You can find Laura on her website or on Instagram.