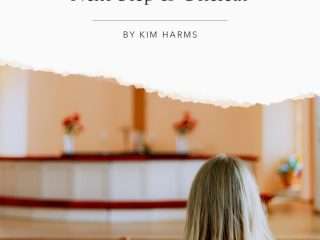 They say, “When one door closes, another opens.” Unfortunately, even when this is true, it doesn’t always alleviate the pain of coming to the end of a season in life and transitioning to another one. Trusting in God and knowing that He gives and takes away, however, can help us find peace and contentment while we wait for the next door to open.

I can’t do this anymore. Please quit. I am asking you to quit.”

It was midnight, but sleep had been elusive in our house for months. My husband had just returned home from what felt like the millionth meeting at our church. As a worship leader, an elder, and a youth ministry worker, he spent a lot of time in the big metal framed building on the edge of town.

In years past, the hours spent in that building were rewarding, in that amazing way in which serving Jesus fills you up as you pour yourself out. Those were days of lunch dates with teen guys looking for guidance, nights of practicing new songs with other musicians, and early morning meetings with his fellow elders spending regular time in the Word and in prayer together.

Even now, I look back on those days with a lump in my throat. The church as it was supposed to be. Not by any means perfect, but fulfilling and purposeful.

When it All Fell Apart

On the same day I found out I had cancer, Corey was presented with the monumental task of explaining to the youth in our church that we had asked our youth pastor to step down.

Is that when it all started falling apart?

I don’t know. What I do know is that at 4:45 p.m. on a Wednesday afternoon, Dr. Testroet called me and said, “I’m sorry Kim, but it is cancer,” and at 7 p.m., I was sitting right beside Corey in front of a room full of distraught teenagers.

That was the first of many hard days. Partly because of the pressing needs of my body, and later because of the unattainable demands of our church ministry.

I finally hit my breaking point.

I was at the end of myself. Weary from Corey being gone night after night at meetings that left him emotionally exhausted yet unable to sleep. Many times, I reached over to his side of the bed in the dark, early morning hours to find it empty. I would lie there praying for my husband who was in another room carrying an impossible weight on his shoulders.

When I finally asked Corey to stop, when I finally begged him to just let it all go, it wasn’t out of selfishness. It was out of absolute necessity.

Corey knew it too. Later, he told me that, though he didn’t realize it at the time, he’d been subconsciously waiting for permission to step down. And so he did. He wrote a short letter to the congregation, and we left a place and people we loved.

The Comfort of Job

I hesitate to reference the book of Job because our situation is like licking a lollipop in comparison, but after we lost our church family, some of Job’s words made sense to me in a way they hadn’t before. “The LORD gave, and the LORD has taken away; blessed be the name of the LORD” (Job 1:21).

Yes, the Lord gave us 15 years of ministry. Yes, the Lord led us to give it up. And yes, a thousand times yes, His name is to be praised in both.

After that letter was sent, Corey and I wept.

Together we started the long walk through loss. Leaving a church family you’ve been a part of for 15 years is a painful divorce.

But even as we dealt with the pain of loss and the feeling of failure that always sneaks in when you’ve tried so desperately to fix something only to find it’s not in your power, we both felt the weight of a hundred pressures lift from our backs.

We could breathe again. We could enjoy each other again. And we slept peacefully again.

In the taking away, God graciously gave us a great reprieve. Though we were bone tired, joy began simmering where before there was only heavy.

In the taking away, God graciously gave us a great reprieve. Though we were bone tired, joy began simmering where before there was only heavy.

Nearly three years later, I still don’t know where God is taking us.

I thought by now we would surely be plugged in within another church family. We are still loving Jesus and serving Him, but not in the way I assumed we would be at this point.

We are in the great ‘in-between.’

We’ve moved beyond the past that weighed so heavily. But we’re not yet to the place where He is leading us. I long for the day I can say, “Yes Lord, I see what You did. I understand the purpose in the waiting.” But I’m learning to live in limbo.

One day at a time.

And, in the process, I’m finding some beautiful things about the space in-between.

The Space In Between

We have found sweet rest. For our minds, our emotions, and our bodies.

We have found gratifying periods of life-giving silence. Intimate moments of quiet that were missing before. God continues to bless us, even after taking away what we clung to and stripping us of what we knew.

Those lunch dates that Corey enjoyed with students from youth ministry have been replaced with weekly dinner dates with our boys.

He sacrificially gave his time to other people’s children for years, and now, God is giving him the time and the energy to pour himself into our own three sons.

Those nights of worship practice with other musicians are gone and missed. But we now have the great joy of listening to the sounds of sweet guitar music flowing through the floorboards from our middle son’s bedroom beneath.

And though we both hope for a day when we will again have deep connections with other men and women of faith, we are blessed with the time and energy to make crucial connections with our children in ways not possible under the weight of our previous life.

Serving within the church is a good and necessary thing. And though I know that God in His own timing will lead us again to serve in bigger ways outside of the four walls of our home, this unplanned sabbatical is a gift.

I could sit in anger at what God allowed to be stripped from our lives, and I could sit in frustration over what sometimes feels like a never-ending wait for whatever the next thing is.

I could sit in self-pity over friendships lost. And though I do sometimes give those feelings room in my heart, they don’t outweigh the blessings that came from stripping away what led us to this great in-between.

God has never taken away from me without also giving.

What He gives is not always what I want.

In fact, more often than not, it runs contrary to my earthly desires.

But this gift of time, this prolonged stillness, this sabbatical. It is God’s blessing heaped up and overflowing. And I choose to breathe deeply and rest, content to live in the in-between.

Kim is a writer and freelance editor. She’s a breast cancer survivor and author of the book Life Reconstructed: Navigating the World of Mastectomies and Breast Reconstruction (Familius 2021.) Her work has been featured in Today’s Christian Woman, CT Women, Wildfire, Chicken Soup for the Soul and a variety of devotionals. She lives in a house tucked back in the woods in smalltown Iowa and adores time spent with her husband, Corey, and their three ever-growing man-children. You can connect with Kim on her website, Facebook, or Instagram.