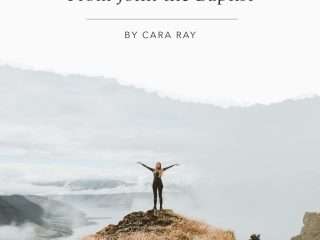 In an achievement-oriented world, we often feel pressured to do more, be more, and stand out more than those around us. And success brings us joy, particularly when we know we’re doing God’s work. But there’s a fine line between being a superstar on God’s team and pointing others toward the true star: Jesus. These four lessons learned from the life of John the Baptist will help us to stay on the right side of that line.

Until recently, I wouldn’t have called my writing a ministry. I thought ‘ministry’ was for pastors and highly visible people with platforms, followers, and seminary degrees. Yet, although I feel called to writing, I lack those impressive credentials. It seems safer (and more humble) to say I’m just a mom in the ‘burbs, who loves Jesus and wants to encourage others to love and enjoy Jesus, too.

Whether writing is your thing or not, God’s Word tells us that if you are a Christian, you are in ministry. “Whatever you do, work heartily, as for the Lord and not for men, knowing that from the Lord you will receive the inheritance as your reward. You are serving the Lord Christ” (Colossians 3:23-24). We don’t need a platform or impressive credentials. Ministry is doing whatever we do with intention for the Lord.

But what about success? Is it wrong to want to see results from the work we do for the Lord? If our definition of success is finding personal or tangible fulfillment in what we do, we’re bound to be disappointed. But, if we choose to measure success by finding joy in loving and serving God and His Kingdom, the relentless desire to seek worldly validation loses its grip on us. By His grace, our focus can change from seeking our own fame and success, to making the Famous One more glorious for all to see.

THE MODEL OF HUMBLE SUCCESS

There was a character in the Bible who experienced the highest highs of ministry success and the lowest lows of doubt and persecution. He drew huge crowds from all around Judea and was so well-known, he caught the attention of the King (who later executed him because of a drunken oath he made in Matthew 14). Yet, this man never clung to his celebrity status but rejoiced when the time came for his ministry role to diminish.

John the Baptist was as other-worldly then as he would be today. Everything from his style to his message was unrefined, raw, and unfiltered. He didn’t cater his message to suit his audience, and he reserved his harshest words for those with the greatest power. No, John the Baptist didn’t seek celebrity, but that didn’t stop it from finding him.

Jesus called him the greatest who ever lived. “Truly, I say to you, among those born of women there has arisen no one greater than John the Baptist. Yet the one who is least in the kingdom of heaven is greater than he” (Matthew 11:11). So what made him the ‘GOAT’? John the Baptist’s ministry shows us four biblical principles by which we can measure our heart, work, and ministry, as we seek to find our fullest joy in serving Him.

1. He Refused to Compete

“And they came to John and said to him, ‘Rabbi, he who was with you across the Jordan, to whom you bore witness—look, he is baptizing, and all are going to him’” (John 3:26).

When John’s disciples worried that his numbers were diminishing while Jesus’ were on the rise, John refused to compete. He didn’t try to work out a new marketing strategy to increase his numbers, or badmouth Jesus’ ministry in order to build his back up. To John, a shrinking audience was evidence he had done his job. He had successfully made the way clear for the Messiah, and it was time to step back.

We’re often threatened by other people’s success. We can look at someone’s success with envy or with self-defeat. But if they’re pointing others to Christ, shouldn’t we rejoice that others are hearing and responding to the Truth? John refused to compete with Jesus. A win for Jesus was a win for John. Like John then, the real prize we should all be working toward is making more disciples of Jesus, no matter who brings them or how they come.

True joy doesn’t come when we make much of ourselves, but when we make the Famous One the most glorious One of all.

2. He Recognized Success Came From God

“John answered, ‘A person cannot receive even one thing unless it is given him from heaven’” (John 3:27).

John’s popularity was given to him from Heaven. As a relative of Jesus, he’d likely had a front row seat to His childhood and upbringing. He knew Him well. He also knew his own success served a larger, more divine purpose of making people’s hearts ready to respond to Jesus’ message.

Whatever earthly success you enjoy in life is a blessing and an opportunity to use for God’s glory. The moment we usurp God’s glory and think we deserve it because of something we’ve done, we’ve failed to recognize that “every good gift and every perfect gift is from above, coming down from the Father of lights” (James 1:17).

3. He Understood His Identity

John the Baptist was the forerunner of Christ, but he wasn’t the Christ. Even though he was often asked if he was the Christ, he never usurped Jesus’ glory. Maybe it was John’s celebrity status and his oddity that made people wonder if he was the one they had been waiting for. Yet John knew his identity was not to receive praise, but to point others to the praiseworthy One.

What a freeing reality for the work that we do! It’s not our job to save anyone. We’re just sent out for Him. We don’t change minds—that’s the job of the Holy Spirit. Our identity isn’t bound up in what we do, or the results. Our identity is found solely in the One to whom we point others. We may or may not see the effectiveness of our ministry this side of Heaven. But we can trust God is working through us, even if He withholds the results from our view.

As a bride walks down the aisle, the best man rejoices for the groom who’s about to be married. John understood his role was that of the best man, and Jesus was the bridegroom. How ridiculous it would have been if John the Baptist had stood in the bridegroom’s place to receive Jesus’ bride! He knew that his fullest joy would be experienced when he stepped aside for Jesus. As fellow ministry workers, we also have the joy of stepping aside and pointing others to the bridegroom.

BECOMING LESS, SO HE CAN BECOME MORE

“Therefore this joy of mine is now complete. He must increase, but I must decrease” (John 3:29b-30).

These words illustrate John’s heart was not to receive any glory but reflect it back to Jesus. His joy was now completely full. He had no intention of stealing the spotlight. He was glad to make Jesus center stage.

Ministry isn’t about fame or recognition. On the contrary, being in ministry is about becoming less, in order to allow the fullness of God to shine through. John the Baptist understood this better than anyone. When we seek to live in humility, and resist the allure of living for personal fulfillment, we will experience joy. No matter what we do—whether we feel called to write or create, care for our families, or work in a professional or volunteer role in some capacity—if it’s done unto the Lord, it is Kingdom-building ministry. True joy doesn’t come when we make much of ourselves, but when we make the Famous One the most glorious One of all.

How has comparison with others negatively impacted your ministry? What lessons can you personally take away from John the Baptist’s example as you seek to make Jesus the focus of everything you do?

Cara Ray writes to encourage and equip other women to see their walk with the Lord not as a box to check off each day, but as a pursuit of holy leisure. She and her husband of 24 years are also the founders of a website and consulting business Avocado Toast Marketing, and they live with their four kids, and two dogs in sunny Gilbert, Arizona. Cara is a contributing author on Medium’s publication Koinonia, YouVersion Bible App, as well as her personal blog.