One of my favorite New Year rituals is unwrapping a brand new planner. I’m an old-school paper gal, and I relish running my hands over the smooth, creamy, blank pages—pages empty of inked-in appointments, yet so full of potential. Like the celebratory fireworks of New Year’s Eve, my heart sparks with excitement over all my goals and anticipated opportunities.

As exhilarating as the start of a new year is, it can also carry bittersweet undertones. Alongside my hopes for the future are the ghosts of New Years’ past—the dreams and goals that haven’t yet come to be. Acknowledging that another year has slipped by without their fulfillment can be painful. When faced with this disappointing reality, I’ve been tempted to give up on my big dreams and settle for the security of a smaller story. Why keep trying? I’ve wondered. Why keep hoping?

As I reflect on the birth of Jesus, I’m reminded of someone who I suspect felt similarly.

I’d like to think that Zechariah never gave up expecting the Messiah, though it’s clear at some point he abandoned his dream for a child. Eroded by the strain of time, his youthful expectations gradually faded to resignation.

Until one day, while performing his priestly duties, the angel Gabriel appeared to Zechariah. Gabriel proclaimed, “Do not be afraid, Zechariah, for your prayer has been heard, and your wife Elizabeth will bear you a son, and you shall call his name John” (Luke 1:13).

Despite the magnificence of the messenger, Zechariah found this hard to believe. His response? “How shall I know this? For I am an old man, and my wife is advanced in years” (Luke 1:18). The Living Bible translates Zechariah’s reply this way: “But this is impossible!”

Judging by his reaction, I’m guessing that the prayer for a child was one Zechariah hadn’t prayed for a long time. Too much time had passed without an answer. Year after year, Zechariah’s prayers echoed back from Heaven, seemingly as fruitless as Elizabeth’s barren womb. Even with an angel standing before him, Zechariah believed it was too late for his dream to come true.

But, as Zechariah soon found out, nothing is impossible with God. Not long after Gabriel’s visit, Elizabeth indeed became pregnant and in time birthed the son the angel foretold.

HOLDING ON TO HOPE

Zechariah had given up on his dream, but God had not. And though God’s answer to his prayer was way outside of Zechariah’s preferred timeline, it fit perfectly into God’s most astounding plan.

Perhaps you, like Zechariah, have given up on a dream, believing too much time has passed since your initial prayers. If this New Year is tainted with the tang of disappointment, I want to encourage you: Nothing is impossible with God. He has heard your prayer, and He cares.

Meanwhile, the waiting is hard. Here are a few things that can help you strengthen your heart and hold on to hope in the coming year:

Focus on your relationship with God. A period of wait—the in between—doesn’t have to be void of life and growth. Use your waiting to develop deeper intimacy with God. Spend time with Him. Get to know Him better. Tell Him your struggles, fears, frustrations, hopes, and dreams. That’s part of being in relationship! God loves to be the One you turn to for comfort. He loves it when you share your heart with Him. He wants to hear the hard things as well as the happy things. In the same way we can develop closer bonds with our loved ones when we go through difficulties together, if we choose to draw near to God, He can use even our challenges to draw us into deeper relationship with Him.

Know that God hears your prayers. Like Zechariah, when we don’t see a quick answer to our prayers, it’s easy to feel like God isn’t listening or doesn’t care. But lack of instant, visible response doesn’t mean God hasn’t heard.

Remember what happened when Daniel prayed? At first, it seemed like nothing. But then three weeks later, Gabriel, the same angel who visited Zechariah, appeared. Gabriel said, “Fear not, Daniel, for from the first day that you set your heart to understand and humbled yourself before your God, your words have been heard, and I have come because of your words” (Daniel 10:12). Gabriel reassured both Daniel and Zechariah that God had heard their prayers. You can rest assured that He has heard yours, too.

Find out what God says about your situation. What does the Bible say about the issue you’re dealing with? The Bible is filled with beautiful promises for every area of life. Ask God to reveal His truth and perspective on your situation, and then hold on to His promises. Write down what He shows you, meditate on it, and comfort yourself with His words.

Ask God to reveal His truth and perspective on your situation, and then hold on to His promises.

Trust that God will keep His promises. Once you know what God’s promises are, choose to believe that He will be faithful to fulfill them in His perfect time. Deuteronomy 7:9 says, “Know therefore that the Lord your God is God, the faithful God who keeps covenant and steadfast love with those who love him and keep his commandments, to a thousand generations.”

Zechariah and Elizabeth present a beautiful picture of God’s faithfulness to keep His promises. The name Zechariah means “God has remembered,” and the name Elizabeth means “covenant of God.” Together, they illustrate how God indeed remembers His covenant and keeps His promises. God not only revealed His faithfulness by answering Zechariah and Elizabeth’s prayer for a child, He also partnered with them to reveal His faithfulness to the entire nation of Israel. Through their son, John, He announced the coming of the long-awaited Messiah—hope of all the world. No matter how long it’s been since God’s given a promise, He hasn’t forgotten. He will be faithful to accomplish it.

Remember what God has done before. How has God come through for you in the past? What are some promises He has already fulfilled in your life, or in the lives of others you know? Don’t forget the testimonies of our ancient forefathers and foremothers of faith: Zechariah and Elizabeth, Sarah and Abraham, Hannah, Daniel, Joseph, Mary, Martha, Lazarus, and so many others. All waited, and all—eventually—received. Remembering God’s past faithfulness helps hope grow in our hearts. Remembering reminds us that if God did it before, He can do it again.

I don’t often understand God’s timing—I wish I did! But I do know God is good, He is powerful, and we can trust Him. As I prepare for a new year, I’m opening my calendar with an expectant heart. I’m choosing to stand on the truth that nothing is impossible with God, and His promises never fail. No matter what you’re facing, I pray you too will hold on to hope. May this be the year that the tears you’ve sown in past seasons produce a bounty of joy beyond belief! 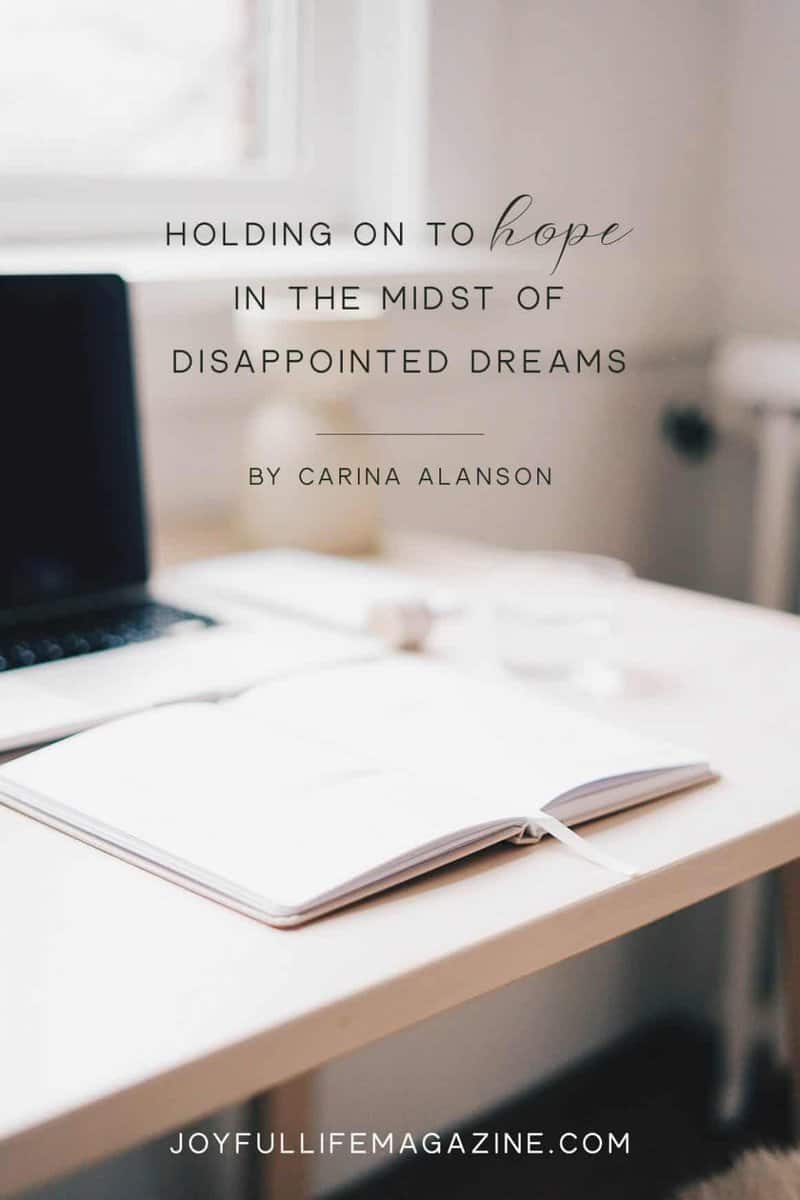