I stand on the porch of my tiny playhouse, my thoughts as long as my brown braid. Spruce trees tower behind me, gilded in slanting sunshine, and warm summer air kisses my skin. The evening feels enchanted, and, in my little girl heart, I dream of someday sharing just such a magical night with my true love. In my fantasy, I see myself with flowers tucked in my hair and a handsome man by my side, gazing into my eyes. I imagine someone who will adore me and think I’m beautiful.

I’m only about 11 years old, but I’m already counting on my future husband to sweep me off my feet, fill my empty heart, and make me complete.

DEFINED BY HER WRONG DECISIONS

I’ve been thinking a lot about a woman who was once an innocent young girl like I was with similar dreams of her own happily-ever-after. It’s only recently, though, that I’ve begun to see her in this light.

Before, whenever I read the story of the Samaritan woman Jesus encountered at Jacob’s well, I saw only a worn-out, used-up woman who had been married five times. I saw an immoral ex-wife who now was living with a man to whom she wasn’t married.

I thought her story was a straightforward tale of a bad woman who made some bad choices and messed up her life badly. I viewed her through the lens of what I perceived to be her wrong decisions, and I thought her wrong decisions were the focus of Jesus’ attention too. When Jesus asked her to go get her husband, she admitted she wasn’t married. In reply, Jesus said to her: “You are right in saying, ‘I have no husband’; for you have had five husbands, and the one you now have is not your husband’” (John 4:18). I assumed it was Jesus’ intent to expose her sin. I thought, in essence, He was saying: “I know every bad thing you’ve ever done.”

But as I’ve meditated on this encounter and studied the cultural context, God has been giving me a new, unexpected perspective, both on the woman and on the meaning behind Jesus’ statement.

A NEW PERSPECTIVE ON AN OLD STORY

In my previous view of her story, I assumed the Samaritan woman’s marriages ended in divorce as a result of her unfaithfulness. I assumed she was at fault. I never considered the possibility that some of her marriages may have ended because of the death of her spouse. Nor did I consider the possibility that if any of her marriages in fact ended through divorce, it may have been against her will and for reasons beyond her control. It turns out, in her culture, she did not have the power to initiate a divorce, except in extreme circumstances. Only a husband had the right to end a marriage, and he could end it for any reason, from dissatisfaction with his wife’s appearance, to infertility, to displeasure with how she prepared a meal.

Previously, I assumed the reason she was living with a man she wasn’t married to was because she was promiscuous. But then I learned that in her day, a woman’s survival literally depended on having a man to take care of her. For the first time, I saw the possibility that after the conclusion of her fifth marriage, she may have stooped to the place of mistress not just to secure some small sense of love, but also to avoid starvation.

The more I learned, the more I realized that what I presumed to be facts were merely assumptions. I realized that far from being a clear-cut case of good-girl-gone-bad, there was a depth and complexity to this woman’s story. There was so much I didn’t know.

But unlike me, when Jesus encountered her at the well that day, He assumed nothing and saw everything.

He saw the little girl she once was, dreaming of her Prince Charming.

He saw the joyful young bride on her wedding day and the bitter tears when her first marriage ended.

He saw the hopeful, second-time wife, and the crushing disappointment of another terminated relationship.

He saw her heart grow increasingly lonely and desperate as her third, fourth, and fifth marriages all ended in despair.

He saw a woman who had been on a life-long quest for emotional and physical security, only to be repeatedly abandoned through death or divorce by the men who promised to provide for her.

That’s why, when Jesus points out her history of multiple marriages and her current entanglement, I no longer believe His primary goal was to expose her sin. Rather, I believe what He was communicating was this: “I see your pain and your grief. I see how you’ve been rejected and unwanted. I see your deep thirst for love and stability.”

On a sweltering desert day, Jesus met her not as her judge or critic, but as a gentle Shepherd. With characteristic compassion, He offered her Living Water and revealed Himself as her Messiah; the only Man who could ever truly satisfy her thirsty soul.

He offered her Living Water and revealed Himself as her Messiah; the only Man who could ever truly satisfy her thirsty soul.

THE LOVE I’VE ALWAYS LONGED FOR

Outwardly, my life bears little resemblance to the Samaritan woman. Unlike her, I live in a modern home with running water, I’ve been married only once, and I have never cohabited with a man to whom I wasn’t married. But there is one thing we have in common: like her, I have sought—and failed—to fill my deepest heart longings with the comfort of a man.

I grew from that little girl with a long brown braid standing on her playhouse porch imagining her future husband into a young woman. I met a wonderful man, and we got married. However, as hopeful as I was, it didn’t take long for my dream of finally feeling completely loved to collapse in the reality of our mutual humanness.

Over the years, I’ve responded to this inevitability with everything from disappointment, to depression, to indignation, to resignation. Regardless of my reactions, the fact remains unchanged: My husband, no matter how hard he tries, can never fill my demand for perfect love. As the Samaritan woman discovered, and as Oswald Chambers so eloquently wrote, “There is only one Being Who can satisfy the last aching abyss of the human heart, and that is the Lord Jesus Christ.”

Marriage is a blessing, and I’m thankful for how my husband cares for me, encourages me, and provides for me. Over the years, we’ve grown in our abilities to love each other in the ways we most need, and our marriage is stronger than ever. Even so, my husband will never be able to fully satisfy that thirsty abyss in my heart.

When disappointment comes, God has been teaching me each time to turn a little more quickly to the Living Water of Jesus. When I do, like the Samaritan woman, rather than a critic who highlights my failings, I find a Shepherd who leads me beside quiet waters. I encounter a Lover who restores my soul. I discover that, in Jesus, I have the love I’ve always longed for. 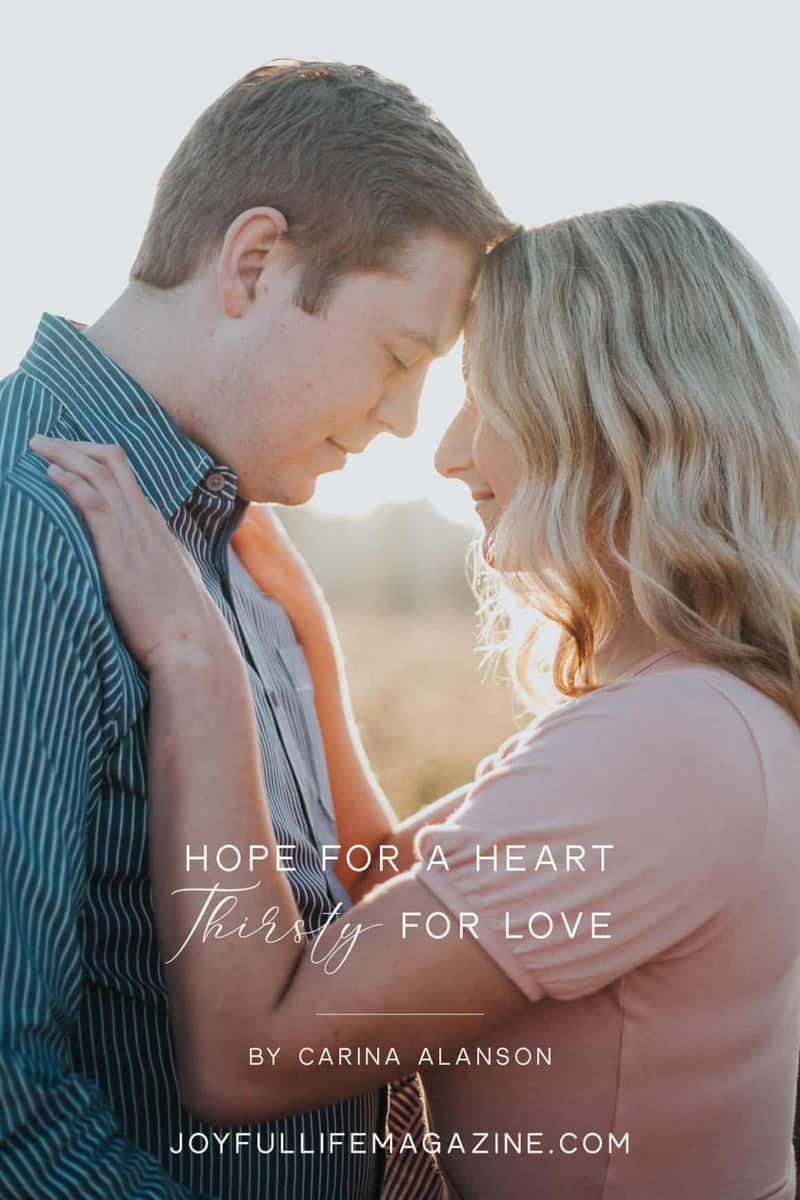