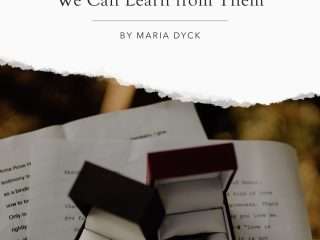 One of the greatest gifts God gives us in His Word is stories of real people with real problems dealing with real life consequences. We may be tempted to put our favorite biblical heroes on pedestals. But God keeps it real with stories that reveal the sinful condition of the human heart. He also shares amazing examples of His grace and redemption in the midst of failures.

But perhaps perfection was never the goal. Perhaps learning to walk in faithful obedience and trust was God’s intention for us. And how that plays out in our marriages is not always in our control. I find these examples of marriages in Scripture somewhat depressing. But I also find hope knowing God does not expect perfection from those He loves. He is faithful to us even in an imperfect marriage.

WHEN YOU ARE MARRIED TO A LIAR

Abraham may have been a mighty man of God, but he was, at times, a terrible husband. In Genesis 12 we read the account of Abraham and Sarah traveling to Egypt to escape a famine that had spread throughout the land. Before entering Egypt, Abraham advised Sarah to pretend she was his sister—not his wife. He did this because he feared he would be killed, and she would be taken by another man. Ultimately, Pharaoh did, in fact, take the beautiful Sarah as his wife. But when the Lord inflicted a disease on Pharaoh and his household he released her back to Abraham and berated him for lying.

Before we dismiss Abraham’s actions as a one-time mistake, we need to remember it happened again a few chapters later. In Genesis 20, Abraham once again declared Sarah to be his sister to protect himself from Abimelech, king of Gerar. While it’s true that she may have been his half-sister, Abraham’s statements were not an explanation. They were intended to be deceitful. Maintaining the ruse would have required Sarah to sleep with another man. And while Scripture is not clear as to what actually happened, the fact that Abraham willingly gave up his marital rights twice to save his own skin is disturbing.

I struggle to reconcile the man of God I know Abraham was with the callous way he treated his wife. I wonder if his selfish attempts to save his own skin planted seeds of bitterness in Sarah’s heart? Did it make it that much easier for her to share her husband with Hagar in a desperate attempt to become a mother? If Abraham did not consider the marriage bed sacred, then why would she?

This imperfect marriage is a necessary reminder that even faithful and righteous men need a Savior. Their proximity to God does not erase their need for forgiveness. Romans 3:23 reminds us that “All have sinned and fallen short of the glory of God.” I would even argue it is perhaps more difficult for the wife of a prominent leader to seek wisdom and counsel when her husband is put on a pedestal. For who will believe her account of what happens behind closed doors?

By God’s grace alone, Abraham’s life does show us that even after failure, a heart continually turned to God can be used by Him in mighty ways.

May these examples remind us of God’s grace in our own circumstances. May they remind us that where He is, there is always hope.

WHEN YOU ARE MARRIED TO A FOOL

In 1 Samuel 25, we read of Abigail. She is the beautiful and intelligent wife of Nabal—a wealthy, arrogant, and surly man. After an extended time in the desert, David and his men are exhausted and hungry. So, David sends his men ahead to inquire of a place to rest and food to eat. Not only did Nabal refuse their request, he insulted them. David was furious and gathered his men together to march towards Nabal’s home. He intended to destroy every male in Nabal’s household. Abigail heard what her husband’s foolish actions had unleashed. So she rushed to correct his mistake. She collected food and supplies for David and his men. This all took place secretly. Abigail intentionally did not tell her husband of her plans and quickly rode to meet David’ army.

Finding David and his men on the path, she threw herself at his feet and begged for mercy and forgiveness for her husband’s foolishness, imploring David to spare the lives of those who were not at fault. David relented. Abigail returned home to find her drunken husband hosting a party. So, she decided to wait until morning to tell him what had nearly unfolded. When Nabal heard of his narrow escape from death, his heart failed.

Abigail’s courage inspires me, but I wonder how frustrating it must have been for an intelligent woman such as herself to be married to such a fool as Nabal. In those days, arranged marriages were customary, and likely she was trapped in a marriage not of her choosing. I wonder how often she was compelled to save her husband from his own foolishness? How many times had she covered his transgressions with her quick-thinking wit?

Sometimes it’s necessary to straighten what our husbands have made crooked and use our wisdom to counterbalance their foolishness. Far too often, husbands are elevated as all-wise and all-knowing while their wives suffer under their leadership.

While we are considered to be ‘one’ with our husbands, God does not see us as a unit when He looks at our hearts. A wife is not held accountable for her husband’s actions unless she agrees to them (for then they become her actions) or unless she feigns ignorance (the sin of omission). On judgment day, I will stand before God on my own, in the same way my husband will stand before God on his own. I will not be held accountable for his sins and neither will he be held accountable for mine. In this way, God protects the innocent woman whose husband is a fool and gives her an identity as His child.

WHEN YOU ARE MARRIED TO A MURDERER

King David was many things: a fighter, a lover, a dancer, a musician, a poet, and, sadly, a murderer. In 2 Samuel 11, after seducing the wife of Uriah, David tried to hide the resulting pregnancy by several methods. But when all his attempts failed, David resorted to murder. He ordered Uriah to be put on the front lines of the battlefield knowing it would mean death. In the aftermath, he married Bathsheba and assumed all was forgotten.

It wasn’t until Nathan the prophet rebuked David that he repented of his sin, and while God was gracious in His forgiveness, the consequences of David’s actions resulted in the death of his son and a legacy of violence which would taint his household for years to come.

When you marry a man, you marry his baggage. While Bathsheba may not have been complicit in her husband’s death, she suffered the consequences all the same when she lost her child. While God’s forgiveness and grace wash away the darkest stains of sin, they do not erase the consequences. David’s family would reap the harvest of violence that David planted, and Bathsheba would be forever entangled in his choices.

Perhaps you understand what it’s like to suffer the consequences of your husband’s sin. Perhaps, like David, he has repented and turned his heart to God. While that is good news, it doesn’t erase the road of hurt you must walk as a result of his actions. Only God can tend to the wounds of your heart, cover you with His love, and give you the grace to face the challenges of each new day.

WHEN YOU ARE MARRIED TO A PROSTITUTE

The story of Hosea is particularly challenging because God directly instructed His prophet to marry a woman knowing she would be unfaithful. Perhaps Gomer had every intention of fidelity when she first married Hosea, but she soon returned to her promiscuous ways, leaving Hosea to deal with the hurt and shame.

God’s instruction for Hosea to marry Gomer was meant to reflect His own relationship with His people, the Israelites, and mirror their sinful and promiscuous hearts. God made it clear to Hosea that if His people returned to Him with a humble and contrite heart He would embrace them once again as His bride. We are never told how Hosea and Gomer’s story ends. Based on past behavior it’s possible Gomer continued her sinful lifestyle and never changed her ways. But in the same way God offered redemption for His bride, I believe Hosea offered redemption for Gomer.

I don’t know what it’s like to face this kind of brokenness in marriage, but I imagine the question is always: Should you take back your spouse after they have been unfaithful? God was willing to embrace the Israelites again, but their reconciliation was dependent on the state of their heart and their repentance. You cannot build a marriage with only one willing partner, and God Himself did not force the Israelites to return to Him. More importantly than how our marriages end is how faithful our hearts remain toward our Savior, and how we allow Him to work in the broken areas of our lives. We have to trust God with the results of our obedience and release the unknown into His hands.

Perhaps one of the biggest comforts of these biblical examples is how God worked in each situation despite the failures of those involved. In each situation, God worked to reveal His goodness, His mercy, and His faithfulness. He never abandoned His people—no matter how unfaithful they became. Their marriages were less than ideal. They didn’t thrive on weekly date nights, romantic dinners, or exotic vacations. Rather they survived on the faithfulness and goodness of God and allowed Him to write their story, trusting He would redeem their pain as only He can do. May these examples remind us of God’s grace in our own circumstances. May they remind us that where He is, there is always hope.

You might not have faced the specific circumstances detailed in this post, but how have you seen God work in your own imperfect marriage?