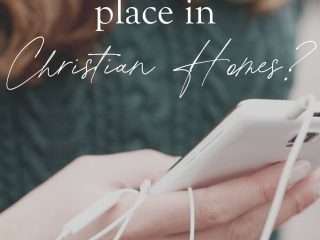 Musical preferences: They’ve been a source of tension between parents and their children for ages. The tastes of one generation rarely carry over to the next and parents often struggle to understand the appeal of their kids’ musical choices. But what about secular music? Does it have a place in Christian homes?

While some would argue that secular songs are entirely inappropriate and should be banned at all costs, others embrace contemporary hits as a necessary part of our culture.

In today’s post, Heather Adle tackles this perennial issue and helps us strike a balance that works for our families.

“I hope you don’t listen to Beyoncé,” I said to my daughter, as I mixed muffins and she told me about her school day. “I just read a disturbing article about the lyrics in her songs. Aside from being highly sexual, they are very demeaning to women.”

My 17-year-old bundle of boy hormones swung open the screen door as I was speaking and shrugged his backpack off his shoulder. “Beyoncé? She’s my girl!”

Our family is a mixed bag when it comes to choosing appropriate, God-honoring musical selections, and we are not alone. I knew from the get-go that secular music culture would try to stake a claim in the minds and hearts of my children.

But of all the areas where I tried to combat the world’s influence on my vulnerable offspring, as a parent, I have found this one to be one of the most problematic.

I suppose I could chalk it up to how I was parented. Growing up, I watched my parents dance to disco—my dad strumming his guitar while belting out “I Want To Hold Your Hand” around the Saturday night campfire. Then, the following morning at church, I would listen as his smooth tenor voice found the high notes in “Christ The Lord Is Risen Today.”

The truth is, I love good music—preferably at a deafening volume. I am captivated by the seduction of lyrical words set to a good beat, and I can never pass up a good dance party to virtually any Meagan Trainor song. Now you know.

When my children reached adolescence and started identifying with secular music, just as I had done, I began to question what they were listening to. Looking around, it seemed most of my friends were unconcerned, leaving me to feel like I might be overreacting.

“They are just being teenagers,” said one. “I’m choosing to focus on the bigger things of their faith.”

There was also the ‘ostrich in the sand’ approach: “What? Who sings that? Not all songs are that bad.”

And, I was not at all surprised to hear the ‘safe,’ albeit legalistic solution—“We do not allow any secular music in our home.”

Finally, I was told there was nothing I could do about what my kids listened to since, “they all have smartphones.” I took exception to these kinds of powerless, hands-off solutions, because none of them seemed to offer what I wanted for my children—a way to help them steer through the noise and learn how to obediently and sensibly enjoy the God-given art of music.

I was convinced ‘banning’ would not work, but fear had me worried that I could not be successful in my fight against the avalanche of explicit lyrics I knew could infiltrate my children’s minds. But really, how bad could it be out there?

One Friday night, I turned on the radio and found out. It was much worse than I thought. Madonna’s scandalous 1984 record, “Like A Virgin”—which my parents did forbid me from buying—paled in comparison to the graphic language I was hearing in today’s pop music.

Gone are the innuendo and vague references. What I was hearing was blatant and obvious. This strengthened my resolve. Navigating the teen music world was going to require a lot of work and a lot of prayer. I dug in.

The sports practices, the classrooms, the peer groups, the sleep-overs—all of it came with secular music. I learned that nothing was off limits, even if it raised a few eyebrows with the supervising adults. My children were going to have a lot of exposure to bad music merely through venturing outside the four walls of our home.

No amount of wishing or praying was going to change that, and while I had to turn that aspect of the teen years over to the Lord and ask Him to protect and shield where He could, I knew my responsibility did not end there.

Inside our home, I began to play more Christian artists, especially those whose lyrics were based specifically on Scripture. I played praise and worship music every morning before school. Sometimes it was only one song as we packed lunches and steeped tea for the ‘to-go’ mugs, but it was something that started off their day with a focus on God, His Word, and His ways.

Over time, it became an early-morning tradition and the kids would suggest the ‘new one’ by any number of our favorite bands. I thanked God for blessing our efforts and honoring my request that the words of the Bible, even though they were being sung and not read, would penetrate and transform the impressionable hearts of my teens, as declared in Isaiah 55:10-11:

“For as the rain and the snow come down from the heaven and do not return there but water the earth, making it bring forth and sprout, giving seed to the sower and bread to the eater, so shall my word be that goes out from my mouth; it shall not return to me empty, but it shall accomplish that which I purpose, and shall succeed in the thing for which I sent it.”

While I encouraged open discussion about music, certain standards had to be set and maintained. Strong, sexually explicit lyrics were not acceptable. Neither was using God’s name as a swear word. Songs that promoted casual sex—and almost all of them do on some level—were often tossed out. I say ‘often’ because, well, I caved at times.

Evaluating our music, on a song-by-song basis, could be a tedious process. We settled for ‘relatively clean’ as the kids got older, and the peer pressure—and let’s face it, natural inclination—to listen to and approve of artists like Taylor Swift, Carrie Underwood, and Eric Church reached an all-time high.

Rather than trying to dodge every inappropriate song with a remark about how ‘bad’ this music is, Philippians 4:8 became our filter:

Rather than trying to dodge every inappropriate song with a remark about how ‘bad’ this music is, Philippians 4:8 became our filter.

It was a team effort. Once, my husband overheard a single line to a song and vetoed it on the spot, while it would have perhaps taken me another verse or two. In the car, when a song was filtered out, I would change the station. Sometimes, the kids beat me to it.

When local churches would host an up-and-coming Christian group, we would clear our schedule and attend the concerts. Recently, that meant Ryan Stevenson, Austin French, and Cochran and Company. We’ve driven hours to see Crowder, Third Day, and Lauren Daigle.

At times, it stretched the budget. I wished we could do more, see more, experience more artists who were lifting God high in our culture and being role-models for our younger generations. In lieu of concerts, online music streaming services are a good option.

Over the years, there was less secular music in our home than Christian alternatives. There were some difficult seasons and conversations surrounding music, when the balance became skewed—a hockey locker room will do that to a young man, no matter how strong his faith.

But overall, we promoted music that glorified God and fortified our minds. Some might say it was not enough, that my line was blurry and my obedience spotty. They could be right. If I had it to do again, I might tighten the reins.

My children are now in college. Both listen to gospel as well as secular music. From what I see, they are careful about their selections. Over the years, their hearts have been more drawn to Christian music and the artists that produce such songs. In times of stress, hurt, or doubt, the music links they share are uplifting and hopeful.

Do they make perfect choices all the time?

Lately though, I would rather raise my hands with Hillsong and swivel my hips to Mandisa. Unless, that is, my husband and I are having a date night, at which point Ed Sheeran will probably be blasting.

Doing battle against the secular music of our culture is not going to look perfect. It is going to be hard and messy. It can be tedious. It is fraught with frustrations, failures, and second-guesses.

It is also saturated with God’s mercy, grace, and blessing—something I often have to remind myself of when hindsight comes knocking and likely right after I’ll cue up and crank For King and Country. 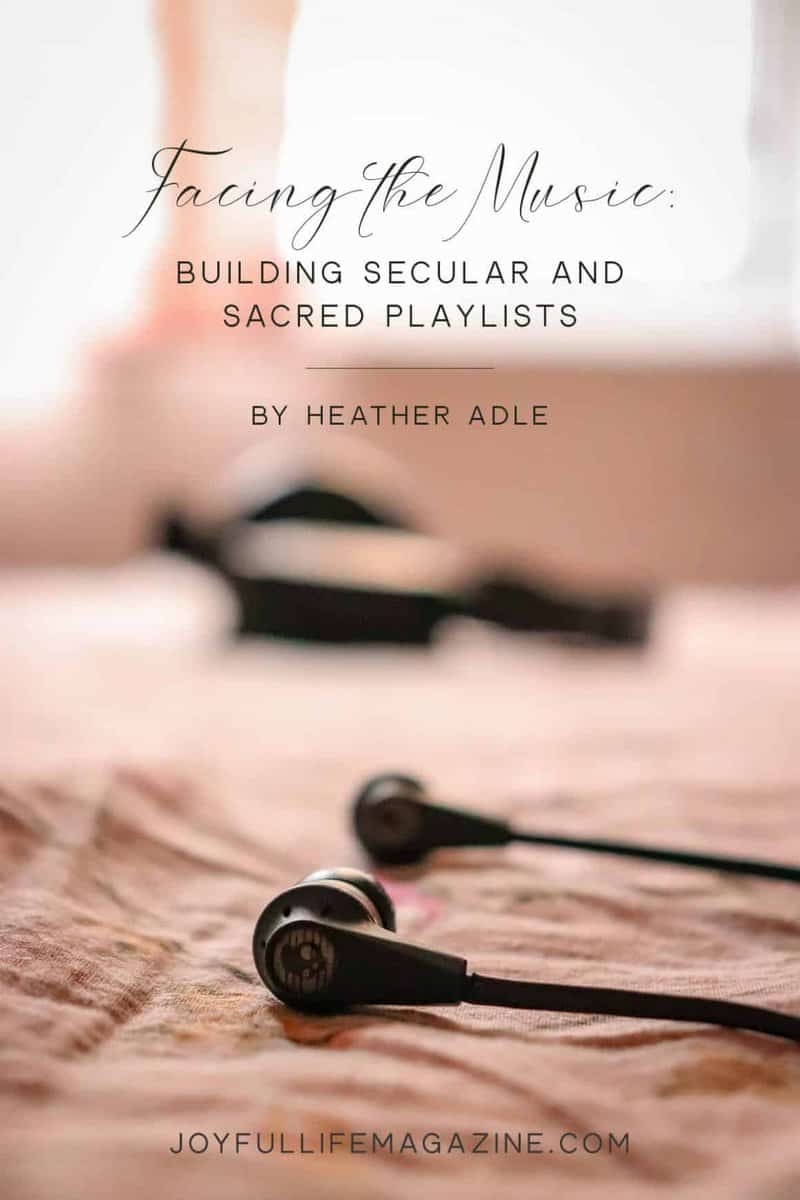 Heather Adle writes about the challenges and hopes of living a life of faith in Christ. She has two grown children and lives in Traverse City, Michigan with her husband. When she is not writing, she is knitting, baking, running, or skiing. You can connect with her on Instagram.