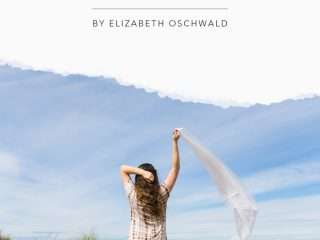 Usually, when we have a promise from God, we want Him to fulfill it in our life right away. We don’t like the waiting. We want to believe that our heavenly Father is just sitting there, waiting to make things better for us.

But God’s perfect timing is so much better than ours. He is working on us and in us during our waiting season, and He gives us the opportunity to grow and overcome the things that our holding us back. He teaches us what it truly means to seek first the kingdom, so that when His promises to unfold, we’ll be ready.

Elizabeth Oschwald shows us what it means to play our part in God’s promises during our in-between seasons.

I’ll never forget the butterflies in my stomach as I pulled into the coffee shop parking lot. My heart was racing—mostly with excitement—but there was a little nervousness intermingled too. I was moments away from meeting a 14-year-old girl who belonged to the man I was falling in love with. I was keenly aware that this young lady could potentially become a ‘bonus’ daughter of mine somewhere down the road.

In wisdom, Dave wanted to give Olivia a voice in how she felt about me before I would meet her three younger brothers. There was a lot at stake in this coffee date, but a familiar peace overshadowed the butterfly flutters and heart pounds.

I likely would have been much more nervous had God not been preparing me for this moment for the last three years.

THE BROKEN ROAD THAT LED ME HERE

No one plans for divorce and single motherhood. In fact, it’s probably safe to say that no Christian woman who finds herself in this situation ever dreamt it was in her future.

When I was newly divorced, I really had no idea what to do. It was simultaneously liberating and terrifying. On one hand, I was no longer bound to a man who I had become afraid of over the course of many years in a very unhealthy marriage. On the other hand, I had no idea how to begin building a new life on my own.

Initially, I thought I could fast-forward through this ‘single mom season.’ I knew I wanted to be married again and hoped for more children, so my thoughts were often bent toward who I would marry, where I would find him, how our relationship would blossom overnight, quickly escalate to a proposal, and (of course) end in a happily ever after. You know, Hallmark movie style.

Quite to my surprise, the first prince charming who came along ended up being very similar to my first husband, in all the wrong ways. Like many single moms I have grown to know, I moved on too quickly—not taking time to reflect, forgive, heal, and even confront the darkness in myself.

What I discovered after that one rebound relationship that ended in multiple broken hearts and incredible regret was that this ‘in between’ season of single motherhood was not an intermission. I did not have permission to hit the proverbial pause button and make excuses because my life had not gone the way I hoped.

I could not blame my unwise choices on pain. I had to take responsibility for my future. It was up to me to discover and pursue the process that would lead to the fulfillment of all the promises God had for me and my two little girls.

WAITING ON A PROMISE FROM GOD

I turned to prayer and waited for God to bring Mr. Right (and our fairytale future) to me. Many times I have stopped there, and then idly waited for the promise to come to pass.

What I know now is this: Faith is believing God will do His part—and it’s also asking Him, “What is my part to play?”

I decided I would diligently pursue becoming the best version of myself so I would be ready to steward the promise of a future husband.

Looking back, I can clearly see why I didn’t meet Dave earlier than I did. There were wounds that needed healing, mindsets that needed altering, and dreams that needed resurrecting before I was ready to become a wife again. Had I met Dave any sooner, I’m not sure our relationship would have lasted.

If there’s anything I learned from single motherhood (in addition to being an innovator, problem-solver, small-budget-maximizer, and leak-fixer), it’s that we have an active role to play in the fulfillment of our destinies. As soon as God shares the vision and the promise, it is our responsibility to prepare for it.

Faith is believing God will do His part—and it’s also asking Him, “What is my part to play?”

THE PROCESS OF BECOMING

I quickly discovered a deep need for God’s grace. As weak as I felt much of the time, I knew He promised: “My grace is sufficient for you, for my power is made perfect in weakness” (2 Corinthians 12:9). I also knew from James 4:6 that God gives grace to the humble, so pursuing humility would release more grace over my life.

I had to forgive those who caused me pain, release all bitterness and offense, and make a conscious effort to bless those who had hurt me. I could not become the woman God had called me to be if there were any remnants of these things in my heart.

I also had to let go of the opinions of others. This meant earning a living doing whatever I could while continuing to homeschool and be the primary caregiver for my daughters, because that’s what He asked me to do. Being a waitress and in-home daycare provider didn’t exactly satisfy my career or income goals, but it afforded me priceless time with my daughters that I will always treasure.

Humility required me to not only push past the feelings of being overqualified, but also to step into positions for which I didn’t feel qualified at all. I said yes to mentoring teenage girls, starting a ministry, and opening my home for a women’s Bible study. I couldn’t believe I was given the privilege to do these things considering my recent divorce, but I walked through the doors God opened for me to serve.

I also gave myself permission to dream again. I opened myself up to endless possibilities and pursued rediscovering my passions, hopes, and gifts. I found myself enjoying this in-between season more and more—and wishing it away less and less.

THE FRUIT OF FAITHFULNESS

What was hidden from me then but is fully visible now, is that every small, humble act of obedience was preparing me for the greatest promotions. The journey produced resilience and steadiness. It put me in situations that were undeniably perfect training grounds for what was to come.

Waitressing and running a home daycare prepared me for a blended family with seven (and often several extra) kids. Serving those less fortunate than me in my community planted seeds of appreciation for every small blessing, so that I could be trusted with being blessed with more. Mentoring teenage girls prepared me for 14-year-old Olivia.

My obedience in the in-between was a bridge to my destiny.

No matter what season you are in, whatever promise from God you are waiting on, if you have a vision for something, don’t skip the becoming.

It doesn’t just happen because we say, “Yes” to Jesus. It’s our responsibility to live a life worthy of the calling we’ve received. Become healed and whole and choose to pay the price for the future you desire. It is up to you to set the stage for receiving the fullness of all He has for you in the season to come.

“And let steadfastness have its full effect, that you may be perfect and complete, lacking in nothing” (James 1:4).

Elizabeth Oschwald is wife to David, & mama in their blended family with 7 kids. She’s passionate about family, writing, and entrepreneurship. When she’s not homeschooling or making lists, she’s doing her best to show moms how to live with freedom and abundance so they can have real and lasting joy! You can read more from Elizabeth on her blog at The Joyful Mama.

A quarterly lifestyle print publication for Christian women seeking the JOY found by inviting JESUS into our everyday lives.