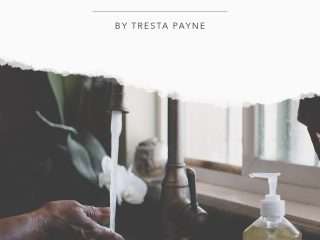 Raising a teenage son requires a delicate balance of keeping your mouth shut and your fridge stocked.  Tresta Payne gracefully demonstrates how to do both. And what better way to glean insight about raising teenage boys than by spending a day in their kitchen?

After dinner we are cleaning up together, scraping dishes and dishing out plans for the next day. My husband is on the phone with a client and the boys and I are putting things in order.

The table is cleared, the food is put away, the dishwasher loaded and ready, and as I’m wiping down the counter one son leans on me. He almost outweighs me now and easily pushes his hip into my side, one arm slung around my shoulder.

I wait, thinking he is about to ask for something or possibly thank me for a good dinner. He doesn’t speak, doesn’t look at me, just stands there hip to hip. For a moment I am tempted to ask him what he needs, but I put down the rag in my hand and hold back the words.

I used to have to force a hug on him each night before bed.

Here he is—arm around me, casual. We look silently in the same direction, like two explorers at the edge of North America or two workmen surveying the day’s tasks. Have we done this together? Cleaned a kitchen, eaten a meal, had a discussion, made it through a day?

At lunch he is rifling through the fridge like a man ending a long fast.

It’s been maybe an hour since his second breakfast but you’d think someone had hidden ancient treasure in this stainless steel box, the way he frantically shifts things around and ducks low to see what’s on the bottom shelf, both arms zombie-like in the refrigerator.

“Starving!” he says, and I am quick to correct his senseless hyperbole. I am irritated with him. He just ate, and only moments ago I was telling him to clean up his food mess strewn from counter to table to living room.

“Like a pack of wild dogs,” I complain. He’ll eat again in a couple hours and it’s senseless to say anything about ruining his appetite for dinner.

His appetite has been larger than life since we brought him home at 17 months old. We thought he’d outgrow his insatiability, figuring it was the natural outcome of orphanage life and never-enough.

People told us he’d make himself sick on so much food but he never did. They told us he’d outgrow his huge appetite but here he is, an hour after his last substantial meal, ravenous for more eggs or more meat or last night’s leftovers, and he is about to cook himself yet another feast.

He pulls out the eggs and somewhere in the dark recesses of the fridge he finds taco meat and cheese. He has a process, and as he toasts an english muffin and fries his eggs over easy, he tells me all about the book he’s been reading for school. He’s in the groove, cooking an odd concoction and yacking at peak performance.

He is oblivious that I am annoyed with him or that I was just passing through the kitchen on my way to work on the laundry, so I stop and listen quietly.

He’s also oblivious that I’ve read the book he’s talking about. I want to correct him on the finer points of plot or the background of the story, but he is flipping eggs and reheating taco meat and I am the only one here to listen.

“Tell me what you mean” I say, when he claims he doesn’t like his book. What I want to say is “You’re not making sense.”

I want to convince him it’s a good book, but I also want to remind him that his laundry needs picked up and he left his socks in the living room last night and his hair needs brushed and a million other petty things, but I am listening. He slows me down.

He is oblivious that I am annoyed with him or that I was just passing through the kitchen on my way to work on the laundry, so I stop and listen quietly.

At 8 a.m. he rolls downstairs with his mouth hanging open and hair standing tall. I am at my desk, reading, the way I usually am when he starts his day.

My back is to him but I turn around as he puts on his coat to go out and feed the cows. “Good morning!” I chirp, having been up and caffeinated for hours. He waves good morning, five long fingers flaring silently into the air in the only greeting I know to expect this early.

I let him keep his own schedule and he is faithful with his work, so the fact that the morning feels half-over is an opinion I have to choke down.

Homeschool has afforded us all the freedom and responsibility of self-discipline, and the few times I’ve had to squish him down into a schedule of my own making, after a lapse in his self-discipline, he has complied.

He is a good kid, I remind myself.

I used to wake all the children at 7 a.m. to go for a jog or walk with me, before cooking a full breakfast for them and starting school at 8:30. Who was that lady?

I don’t have the energy for that kind of schedule anymore, nor is there a need. Discipline and routine have served their purpose, even if this last child doesn’t begin the day at full tilt.

He comes back from chores and commences part two of his morning ritual: breakfast. He won’t eat cold cereal and turns his nose at quick-fixes, but the boy can cook. The griddle is his favorite tool and he cracks two eggs in a puddle of entirely too much oil. “

That’s way too much!” I say, to which he nods. It’s this way every morning. The oil sizzles and runs off the griddle; he “cleans it up” by smearing it across the counter and throwing the rag in the sink; I come in later and say lots of words about mess and waste and responsibility and yada yada.

It’s a thing we do, on repeat.

I sit at the table with him while he eats and I try to talk cheerfully about the day ahead, try not to worry about his manners or his lack of fruits and vegetables. We read a few verses together from Proverbs, which is not a routine we keep well but it’s always something he’s willing to do.

He will listen to anything from God, I think to myself. I ask him some questions and he answers with his mouth full, but thoughtfully, slowly.

“What’s for dinner?” he asks at 8:30 in the morning. This makes the day seem long already.

I wonder how I will do today, what words I’ll say that I wish I hadn’t, what attitudes I’ll have to be gracious with, what we’ll eat for dinner. I wipe oil from the counter and take some meat out of the freezer to thaw, and he shuffles off to start school.

These days, one good meal and one good conversation are counted as wins. A clean kitchen is a bonus.

We’re doing alright, I tell myself on repeat.

Tresta lives with her family in southern Oregon. She's been married to Tim for 24 years and they have five mostly-grown kids, 2 dogs, 4 cows, and a varying number of chickens. She's always looking for a cozy spot to read good books and somewhere to set her coffee mug, but in reality she is usually standing at the kitchen counter. Tresta's writing has appeared at Fathom Mag, Morning by Morning, Kindred Mom, and her blog.