Sitting at the small bistro table with a tasty lunch, the cool crisp air and the warm conversation with my husband refreshed my weary body. It had been an early morning filled with outdoor activities, and I was chilled to my bones. But now the sun’s rays poked through the color-splashed fall trees. Nearby, a small river bubbled and a gentle breeze whispered in my ears. I could feel the call of the running trails growing louder in my heart and head.

Out on the trails, my mind clears, my body discovers strength, and my spirit finds courage. The steady beat of my feet hitting the pavement, and the rhythm of my breathing, soothe and comfort uptight muscles, nerves, and emotions. Birds singing, squirrels chattering, and deer bounding through the underbrush are musical overtures which quiet my soul. It had been so long since I’d been able to run and I yearned to be back on the familiar trails. But the more I tried to ignore them beckoning to me, the more my attention drifted away from lunch and toward the woods where they lay.

Running and I have a long history together. It has been my primary means of releasing anger and processing the different seasons of life. In fact, it became an emotional and physical lifeline when my life fell apart as a young 20 year old, floundering to cope with a past filled with abuse. When the silence broke and the truth of my imperfect life was exposed, running became both my friend and my enemy. Day after day, and mile after mile, I pounded the pavement. I ran from my emotions. I ran from those who hurt me. Eventually, I ran myself into exhaustion. When a stress fracture in my foot meant throwing out my greatest emotional coping mechanism, suicide seemed to be my only option. But in that dark place, God found me.

God wasn’t new to me. I grew up in a church-going home and attended a parochial school. I knew the basic Bible stories, how to pray, and what was expected of a ‘good’ girl. In 2ndgrade, all I wanted for Christmas was a Bible. Even though my parents were clueless about where to find one and what translation to purchase, one found its way under our tree. I started reading it from the beginning—some parts were familiar, while others were harder to digest. But it was the book of Isaiah with its inspired words of comfort, worth, and love, that called to my young heart and drew me close to the Father. Verses like, “Fear not, for I have redeemed you; I have summoned you by name; you are mine” (43:1b), and “Even to your old age and gray hairs I am he, I am he who will sustain you and I will rescue you” (46:4), were exactly what I needed to hear in the turmoil of my young abusive years—and a decade later when the abuse finally came to light.

When my foot recovered, I slowly began to run again. Running became cathartic and healing. But more than that, it brought a stillness to my soul—a peace that God was near. To run meant to feel God’s presence. Olympian and missionary Eric Liddell once said, “When I run, I feel God’s pleasure.” I understood his sentiment. Like him, I found the combination of nature and running to be a spiritual experience. It drew me into a place of listening and praying. It opened me to God’s voice and presence unlike any other time or place. Running was good for me in many ways.

But even good things can become idols.

I continued to run in the years that followed my counseling and recovery. Running became a significant part of me; it defined me. I logged distances to train for college sports or to simply stay in shape. When children came along, I ran on a treadmill in the basement when they napped or played. When my husband was available to watch the munchkins, I headed out the door to find solitude or relieve stress. And when we moved into a house by one of the city bike trails, running wove its way into the fabric of my daily routine.

At first, I planned my early mornings around both Jesus and jogging. But the farther I ran, the more time was necessary to commit to my ‘hobby’. It wasn’t long before I struggled with prioritizing my love of running and my love of Jesus. One of them had to go.

Six days a week, I woke up before anyone else in the house stirred, spent 30 minutes reading my Bible, and then headed out the door for a run. On paper that sounds okay, but in my heart, it wasn’t. I never fully engaged in my devotions as I anticipated my morning runs. I constantly wondered: What’s the temperature outside? What should I wear? How far am I going? What kind of training run am I doing? Eventually, my early morning jaunts squeezed out my devotional time. Running—not Jesus—became my first love.

I was addicted. I logged my miles, my clothes, my diet, my shoes—all things runners care about. I devoured books and magazines pertaining to running techniques, gear, and training plans. I crossed a marathon off my bucket list, won a medal at a local race, and measured my friends by their athletic abilities. I strove to run better and further each day. I ate running. I breathed running. I slept running.

Then the unimaginable happened.

After running eight miles one Sunday in November, chronic disease entered my life overnight. By Wednesday, I was lucky to walk eight steps.

In the days and weeks of suffering that followed, I returned to Him who had sustained me through so much in the past. I reignited my passion for His Word and laid bare my heart in prayer. In the sleepless hours of the night, the book of Job and my tears kept me company. Though it sounds strange to say, it was beautiful. Running had sidetracked me from what mattered most. Now, I cherished the rich fellowship between the Father, the Son, the Spirit, and me.

In His great mercy, God sometimes takes away in order to give us what He knows is best for us.

Though time—albeit a long stretch of it—and the right medications put me back on my feet, I still face physical limitations due to rheumatoid arthritis. Running is not a given anymore. But God is. Like the apostle Paul, I can wholeheartedly say that the eternal spiritual blessing of a deep, rich relationship with Jesus far outweighs my earthly disappointment.

God’s presence brings joy in the midst of trials, comfort during times of suffering, strength to persevere when weak, and hope in the face of fear. Hope grounded in Christ and His gift of eternal glory is the only hope that provides a firm and secure anchor for our souls (Hebrews 6:19). It is this hope that helps us put one foot in front of the other and run the race set before us (Hebrews 12:1)—diseased or otherwise.

Relearning to spend regular quality time with Jesus required much trial and error, but in the process I discovered practices that worked well for my temperament. Like a meal plan which needs variety to prevent boredom, our devotional life can benefit from being changed up from time to time. There is no reason to stay stuck in a rut for our quiet time, our worship, and our relationship with Christ. We have permission to keep it fresh and full of creativity.

Our quiet times also don’t need to be elaborate to be meaningful. My pastor shares regularly that his day begins with a chapter from the Bible, a chapter from a Christian book, and time spent journaling his prayers. It is a simple but profound rhythm for him. Likewise, there have been seasons in which reading a chapter from Proverbs each day of the month has been enough to engage my heart with God’s. But for me especially, being outside in the woods or alone on the trails draws me closer into God’s presence—sometimes I’ll pray through Scripture, worship with praise music, or listen to an audio-Bible on my phone as I walk. What matters is doing what works for me and honoring the way that God has wired me to connect with Him.

I’ve also learned to ask myself some specific questions on a quarterly basis.

When I look at my calendar, who or what is getting most of my time? My best time? If it’s not God and family, how can I change this?

What excuses have I used to explain why I can’t spend extended time with God? How can I eliminate these excuses?

Do any of my regularly occurring activities act as idols and keep me from committing to Jesus first and family second? Would it be wise to commit to a season of less activity so that I’m not torn between them and God?

Am I engaging with my spiritual temperament and the spiritual practices that work for me? What are some ways I can engage with them and schedule them into my life on a daily, weekly, monthly, or yearly basis? 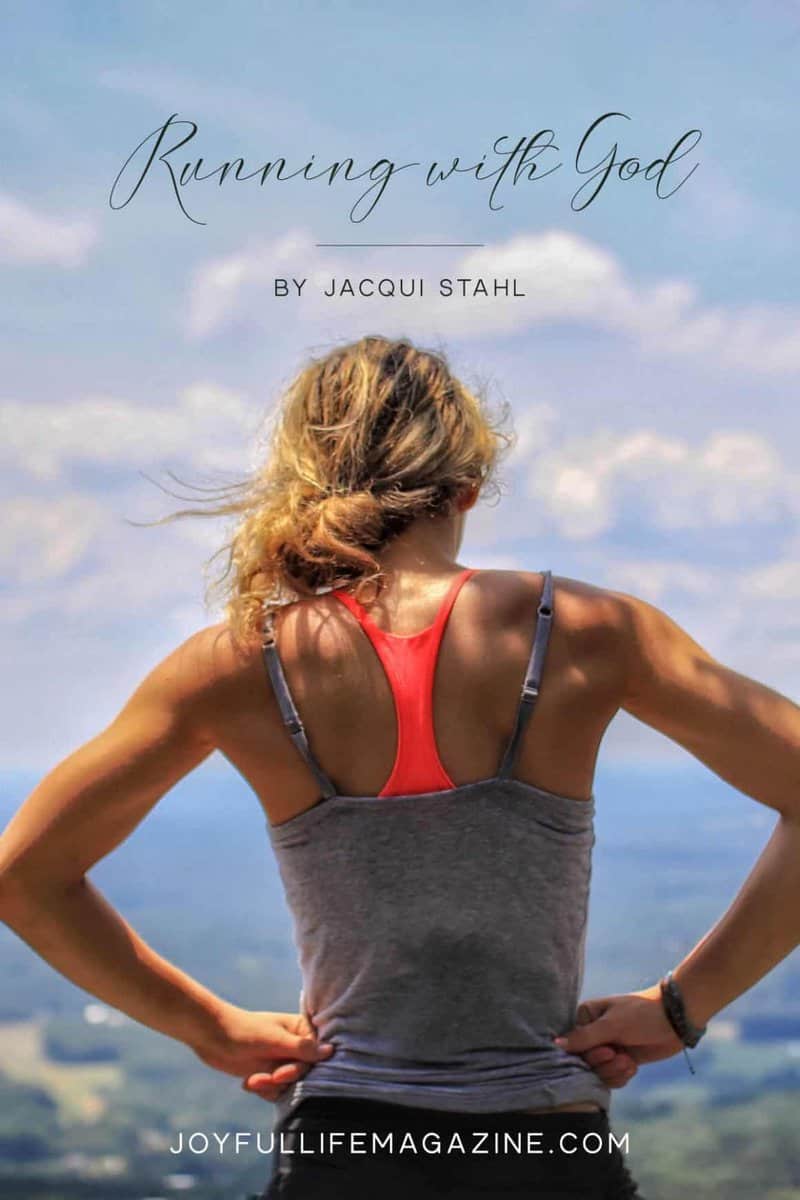 Jacqui has been married to her second love for 26 years. Together they have forged through health issues, raised four kids, and served as lay ministers in the local church. Jacqui still runs on occasion but is grateful to walk, hike, or bike regularly. No matter which activity she participates in, she still feels God's presence in the wind on her face.