I first learned about eating seasonally and locally back in 2010 when I read “Animal, Vegetable, Miracle” by Barbara Kingsolver. In this book she recounts how, after her family moved from Arizona to a farm in Virginia, they decided to eat seasonally for a year by gardening and buying only locally grown foods.

This approach may seem extreme, but only 100 years ago almost everyone ate this way. Without many of the modern technologies we enjoy today, our great-grandparents had no choice but to eat seasonally. But today, when fresh fruits and vegetables are available year-round in the grocery store due to being shipped from other parts of the nation or world, are there any good reasons to still eat seasonally? Barbara Kingsolver’s story convinced me that there are, and I want to share with you some of the reasons that most motivate me to eat this way.

FINDING SEASONAL EATING WITHIN THE BIBLE

Ecclesiastes is one of the wisdom books of the Bible—these books give us guidance about living a life that is pleasing to God. Although the Bible is not a medical or nutritional text, it does reveal God’s design, and in Ecclesiastes, Solomon observed that in God’s plan for the natural world there are specific times of planting and harvesting. Science confirms the wisdom that is given by God to us in the Bible and informs us of some of the specific health reasons for eating seasonally.

SEASONAL FOODS ARE THE MOST NUTRITIOUS

Nutrients in fresh fruits and vegetables begin to decline soon after they are picked. Local foods in season contain the highest amounts of vitamins and minerals. Foods from South America, or even further away, have spent days in the shipping process before reaching the store. Then they may stay on the shelves at the store even longer before they are purchased. It will easily be a week or even more after picking before the produce is eaten, even if it is consumed on the day of purchase. In contrast, the fruits and vegetables at local farmers’ markets are often picked that same day and so will have much higher levels of nutrients.

There is no comparison between the flavor of vine-ripened tomatoes or tree-ripened peaches to those picked before they are fully ripened and transported a great distance. Apples can be stored for months in cold storage before they are shipped to the stores, but these out-of-season apples often have a mealy texture and are less flavorful than fresh, in-season ones.

SEASONAL EATING IS THE MOST NATURAL FOR OUR BODIES

Before refrigeration was widely available, produce could not be kept for long without spoiling. Without air transportation, it was impossible to get strawberries in the winter or oranges in the summer—and bananas, one of the highest sugar fruits, were almost unknown in the northern hemisphere. But now, these and many other fruits are available on a year-round basis, and most of us do not have metabolisms that cope with eating lots of high sugar foods, including fruits, so frequently. Eating seasonally is a great way to naturally reduce sugar consumption because fruits will be limited to relatively short seasons rather than all year round.

Locally grown seasonal produce is usually less expensive due to fewer transportation and packaging costs than imported produce. In addition, because of supply and demand, produce that is plentiful at the height of the season will cost less—sometimes much less—than fresh produce at the beginning of the season or in the off-season.

Grief is a delicate thing—whether we are going through it ourselves or wanting to be there for another person. When all else fails, and you don’t know what to do, remember grace. Grace for yourself and grace for others. Because God's grace covers us all.

Food allergies or sensitivities can occur when a food is eaten repeatedly. However, food sensitivities can sometimes be eliminated by avoiding the food for three to six months. After this time frame, as long as no negative symptoms are felt, the food can be added back into one’s diet, though the food should not be eaten more frequently than every four days. Seasonal eating is a natural way to rotate foods. Even if a food is eaten daily while in season, this is normally only for a period of one to two months. Then the food is not eaten for the remaining ten months of the year.

Why not follow the example of Barbara Kingsolver and her family and try eating seasonally and locally as much as possible? It will make your meals fresher and tastier, improve your nutrition and health, and save you money.

*The information provided in this article is not intended or implied to be a substitute for professional medical advice, diagnosis, or treatment and you are always encouraged to discuss any questions or medical changes with your physician or health care provider.

Try this recipe which uses one of my favorite summer fruits: blueberries.

Preheat oven to 350°. Place the blueberries in a bowl and toss with the lemon juice. Place in a 9 x 9 baking dish. In a mixing bowl, combine the almond flour, pecans, melted coconut oil, maple syrup, cinnamon, and salt. Spread the nut topping evenly over the blueberries and bake until the dish is bubbly and the top is golden brown (about 25-30 minutes). Enjoy warm by itself or topped with coconut milk whipped topping or ‘ice cream’. 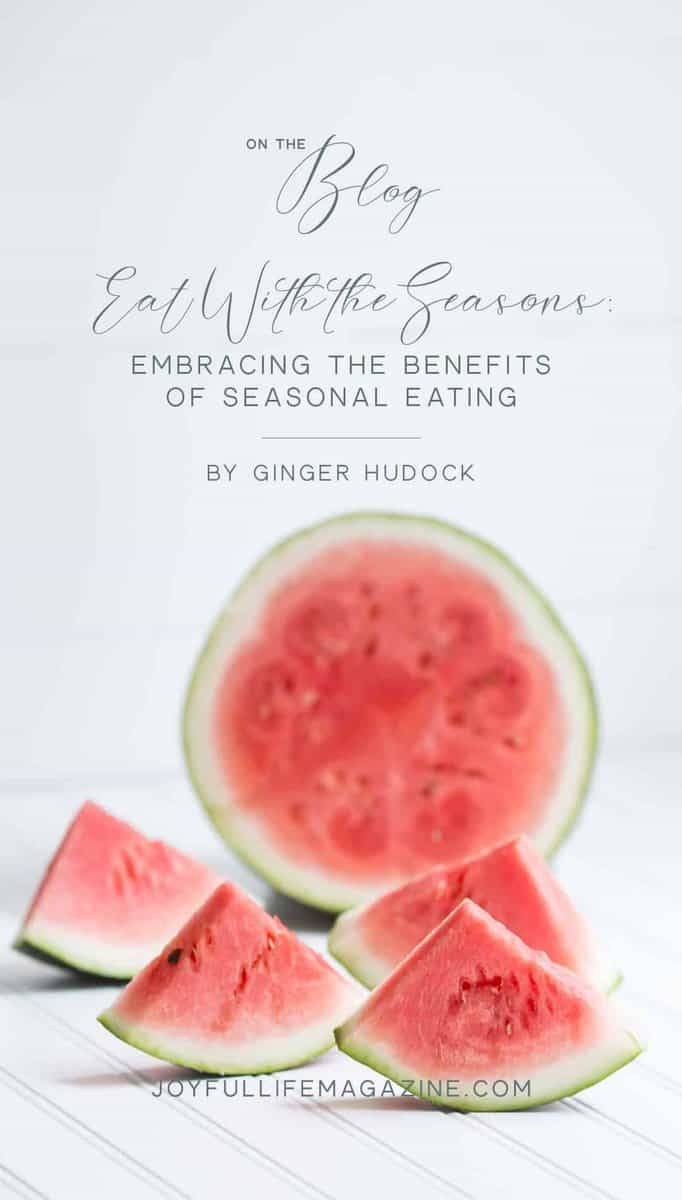 Ginger Hudock’s eclectic background includes degrees in vocal performance, finance and nutrition. She worked as the Vice Chancellor for Business and Finance at USC Aiken for 25 years before beginning her nutrition career. Her writing has appeared on-line at TheMighty.com, and she writes a monthly nutrition column for Aiken’s Bella Magazine. You can read more of Ginger’s articles about food, nutrition, faith and personal finance at her blog.