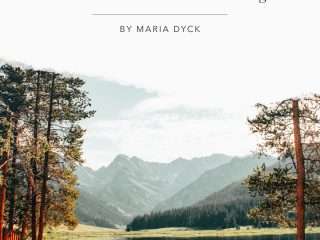 Teamwork in marriage doesn’t usually come naturally. It’s a skill we develop as we mature together in the same direction with our spouse. And, as Maria Dyck so keenly illustrates, it’s a skill usually acquired by surviving trials together.

It was the perfect day for a canoe trip down the lazy, tropical river. A few friends had gathered together for what was supposed to be a relaxing Sunday afternoon adventure. My boyfriend and I had been dating for a few months, and you could say things were getting serious between us. We still had much to learn about each other and navigating life together, but on that afternoon, our only concern was enjoying the day.

Out of all the canoes available, we were given a rusty, white canoe with an odd design. Instead of the usual pointed ends, the back of the canoe was flat—perfect for attaching a small motor. I thought nothing of it and hopped into the canoe like I had done many times before. Mr. Wonderful pushed us in and away we sailed. I sat in front while he took command of the captain’s seat in the back.

It was going to be the perfect day!

It didn’t take long for us to notice that our canoe struggled to keep pace with the others. While our friends effortlessly glided through the narrow jungle river, we found ourselves repeatedly left behind. No matter how hard we worked, we simply could not keep up!

Mr. Handsome was giving out words of encouragement from the back seat as well as helpful advice, but it didn’t matter––we were falling behind.

Jungle rivers are deceiving. On the surface, they appear to be barely moving when, in fact, they clip along rapidly. We narrowly missed a few trees poking out of the water as we navigated the winding river. It was getting a bit stressful, and Mr. Encouragement, giving orders in the back, was getting on my nerves.

With each command, I grew more and more annoyed, “How many times have you canoed?” I asked.

“Oh, this is my first time,” he answered nonchalantly, and I marveled at his ability to pretend he knew what he was doing.

And It Only Got Worse

As we rounded another tight curve, we caught a glimpse of trouble up ahead. A dead tree lay across the narrow river, and there was no time to maneuver around it. We were headed for a collision.

“Duck!” shouted the Captain from the back seat. I leaned forward as low as I could in an effort to dodge the thick branch. “Duck!” he shouted again, but it was useless. With a loud thud, the tree smashed into my forehead and threw me onto my back in the middle of the canoe. My glasses sailed into the sky and disappeared.

As I lay there, dazed and confused, Mr. Know-it-All looked at me and chastised, “I said ‘duck.’”

All of a sudden, I had a great new idea for my paddle!

My good mood evaporated in the jungle heat, and as I hunted for my glasses, I fought the anger that threatened to bubble to the surface. Mr. Helpful found my bent frames, now missing a lens, and handed them to me. Wearily, I put what was left of them on my face, and we began rowing once again. Outwardly, I was exhausted, sore, and bruised. Inwardly, I was nursing a grudge toward Mr. Annoying. In that moment, I wasn’t sure if we would make it—not just to our destination, but also as a couple.

Thankfully, our group stopped for a break, and it was decided another pair would try the cursed, white canoe. With some trepidation, I stepped into another canoe. I was not convinced things were going to improve, but there was no other way home.

As we set off, we noticed a difference almost immediately. Instead of struggling with every stroke to gain speed, we flew through the water with very little effort! Every slice of the paddle propelled us gracefully forward. I looked behind us to see our friends struggling to keep up in the white canoe and felt a pang of pity.

At some point, it dawned on me that the problem had never been my boyfriend’s inexperience or my lack of effort, but rather a design flaw in the canoe itself. The flat edge which was meant to hold a motor created a great deal of friction making it twice as much work to move quickly.

I’ve thought about this day many times since we got married (yes, I did go on to marry Mr. Wonderful), and I always marvel at how a little design flaw could create so much chaos for us—how much it dragged us down and caused us to complain, feud, simmer, and ultimately, crash.

Isn’t this true of relationships in general? No relationship is ever smooth sailing; life often throws us a flaw—a circumstance beyond our control which drags us down and makes moving forward difficult.

Perhaps you and your spouse struggle with finances and trying to make ends meet. Maybe you are dealing with a difficult family member or struggling to care for an elderly parent. Or perhaps, you are wrestling with your own health crisis, a wayward child, joblessness, infertility, or grief. By now, you are likely aware how these extenuating circumstances pull on your marriage and drag you down. But before caving in to discouragement, let’s examine a few vital objectives that may help you grow in your teamwork in marriage along the way.

No matter what you and your spouse face, working together with the Holy Spirit will make a vital difference in how you navigate the twists and turns.

I assumed our trip was going poorly because of my boyfriend’s inexperience, and he assumed it was because I wasn’t working hard enough. We were both wrong. The problem wasn’t either of us, but an issue outside of us, but because we couldn’t see the real issue, we blamed each other.

Too often, I am quick to find fault in my husband without carefully examining the real culprit. Ephesians 6:12 reminds us that “our struggle is not against flesh and blood” but against “forces of evil in the heavenly realms” (NIV). These forces of evil would love to tear apart what God has built, and when we attack each other instead of the problem, we play right into the devil’s schemes.

Learning to recognize the root issue requires wisdom, discernment, and the willingness to have difficult conversations with our spouses, but it’s the first step in tackling relational challenges and building teamwork in marriage.

When life is smooth sailing, we may appear to have it all together, but hardships tend to bring out the ‘real’ us. I didn’t know I had a temper until someone got close enough to annoy me, and once I saw it, I had to deal with it. Seeing our sin is always an unpleasant and eye-opening experience, but that’s not all it’s meant to be. God does not reveal our sin to condemn us but to kindly call us to repentance and, ultimately, to Himself.

We are called in James 1 to rejoice in trials of all kinds—even awful canoe trips—because they are meant to develop our faith, maturing us for the journey ahead. This trip revealed a few areas in our relationship that needed work—namely, my temper and his bossiness. I was grateful these came to the surface before we married so we had time to talk and process through them beforehand.

After 20 years, we are still working on some of the same issues from time to time. We’re still growing in our teamwork in marriage. But we now have the maturity to handle difficult situations which come our way.

WORK WITH THE HOLY SPIRIT

Imagine the Holy Spirit is like a jungle river. Now imagine paddling against the current. This is what life is like when we work against His movement in our lives, when we refuse to submit to His leading, and when we fail to obey His promptings. Of all the things we did wrong that Sunday afternoon, at least Mr. Steady and I were working together as a team, heading in the same direction, and flowing with the current. In spite of all our troubles, we still made progress.

No matter what issues you and your spouse face, working together with the Holy Spirit is going to make a vital difference in how you navigate the twists and turns while fighting against what drags you down. You may feel like you aren’t making any progress, but the Holy Spirit will faithfully push and move you in the right direction.

In John 14, Jesus comforts His disciples by promising that they will never be alone; they will receive the Holy Spirit who will be their Counselor, their Helper, and Guide through life. As believers, I am convinced that we do not realize the magnitude of such an astounding gift from our Heavenly Father! We have, within us, the incredible Source of Life, and without Him, we are helpless and void of any supernatural power!

Do not forget to rely on the Spirit who lives inside of you, and who can empower you with strength and wisdom for whatever difficulty you may face.

It’s been over 20 years since that no-good, horrible canoe trip, and though we went on to have many more canoe trips together, none have lodged in our memory or made us laugh as hard as that day. He still gets a little bossy in the back seat, and I still roll my eyes occasionally. But in the end, we smile, laugh, and find a way to work together. Our teamwork in marriage isn’t always thriving, but we’re always growing. The years have taught us to be more gracious with each other, to remember who our enemy is, and to surrender ourselves to the work of Christ within us.