My teeth were chattering, but I was not cold. Sitting in the counselor’s office waiting for my husband to speak was one of the longest moments I’ve endured. That day, I learned the results of his lie detector test and heard his full confession for the first time. My heart raced and my stomach was tied in knots. I knew deep within that nothing could prepare me for what I was about to hear.

The following twenty minutes were filled with gut-punching confessions and revelations. Secrets and lies that predated our life together, had evolved throughout the course of our marriage. The extent of the betrayal was paralyzing, the venomous words like flames licking my face. This could not be my life. The stranger sitting next to me could not be my husband.

My instinct was to run.

Run away from him.

Run away from God.

The next few weeks, months and, dare I say, years were filled with the painful reality of walking through fire. There was no going around it. Believe me, I would have chosen any easier route. Instead, I learned the hard truth that passing through the fire is the best and only way to be refined by it.

I learned the hard truth that passing through the fire is the best and only way to be refined by it.

Without breast cancer, I would not have found the faith I needed to face the inferno of my marriage. Finding Christ was a direct result of that diagnosis. Had I not come to know Him personally during that trial, I am confident I would not have been able to face this one. With God by my side, I now knew that there was hope. It was this loving gift of faith that made it possible to get out of bed each day instead of crawl under it. It was this precious relationship with Jesus that coaxed me to learn what true forgiveness means.

What is He asking

During this time, God tenderly opened my eyes to the story of Hosea. A man who was called by God to marry a prostitute. To love a woman who continuously had affairs and children by many men. He endured a life of heartache and disappointment, but his obedience to the Lord did not waver. When I looked past all the soul ache Hosea suffered, I noticed what was brewing just beneath the surface. I saw what God was asking of him—what He’s asking of all of us.

Yes, daughter, I do.

But Lord, this is not what I signed up for. He lied to me! My heart is broken. I can’t go on like this. He knew I wouldn’t have married him if I had known. I’m suffocating. I want out. I want to run. Give me a way out.

You can have it if you want. You can leave, Precious. But listen to Me. You are not perfect. You are full of sin. And so is he. Is your sin more righteous? “For all have sinned and fall short of the glory of Me” (Romans 3:23).

Ouch. So, You’re saying my sin is equal to his? The scales won’t tip in my favor? My sin is lighter than his, right? It’s not as bad.

No, I don’t measure degree of sin. Sin is sin.

In this back and forth, God worked tenderly on my heart and slowly mended it with His love. While people fail me, I learned that He is enough. He taught me to trust again. He gave me discernment and wisdom. I grew and I learned, yet I couldn’t quite find it in my heart to forgive. Not yet.

In my study of His Word one day, words I had read and recited over and over again jumped off the page as if in a backdraft. When consumed oxygen is restored once again, the fire explodes in a fury. In the same way, God opened the door of knowledge and then—explosion. His Words were the new oxygen needed to fuel the fire of my refinement. A refinement, I was discovering, that would be an intense, all consuming process.

I stepped into the flames and let myself get swallowed up by the heat. I covered my face, but I could not cover up the unveiling of Truth. The truth that I am forgiven as I forgive others. Really, Lord?

Yes. Allow Me to teach you.

The empty scream smothered in smoke was caged silently within the growing fire of the backdraft. I didn’t want to forgive. I was angry. I felt as though I was one on fire, being consumed day after day. I wanted to lash out so my husband could feel the burn as well.

“Vengeance is mine,” said the Lord.

This is not how life was supposed to be. I wanted a do-over—a chance to make my world right again.

My child, your husband is hurting too. If only you could see him through My eyes. See his worth—that his heart is not his hurt nor his hauntings. I’m mending him, just as I am you.

I knew I would stay in the fire as long as it took for God to humble me, to break me, to refine me by the flames of His loving mercy. I was suffocating on my own stubbornness. Yet God, in His tender gentleness, opened my eyes to how this forgiveness thing works, and the choice I knew I had to make. One that I could only make with His help.

the not so easy part

It was not easy to admit my own shortcomings in the wake of our imploded marriage. It would have been so easy to place all blame on my husband. To allow him to carry the uneven burden of the sin that was driving a wedge between us. My sin just looked different than his. It wasn’t any better.

We chose to let go of the bitter in search of the better. To turn toward each other and together, toward God. God was our anchor, our rock, our safe place.

My husband repented and asked for forgiveness.

I did the same.

We forgave each other and built a new foundation. A foundation based on God’s Word.

God called it blessed. “Blessed is the one whose transgressions are forgiven, whose sins are covered” Psalm 32:1 (ESV).

On the other side

We walked out of the fire together. Stronger. Broken but forged into something better. For it is only in the brokenness that we become whole—we are transformed by the Holy. When we allow God to fill in all the empty cracks of darkness with His bright, shining, holy love, we are created new.

“For he has rescued us from the dominion of darkness and brought us into the kingdom of the Son he loves, in whom we have redemption, the forgiveness of sins” Colossians 1:13-14 (NIV).

The grace that was given washed away the flames. Mercy extinguished any remaining ember. We placed our own sins at the feet of Jesus and asked for His forgiveness. We were showered with love and forgiveness, in all its abundance.

It is only by the grace, mercy, and loving kindness of God that we are standing here today, side by side, scarred but not consumed. God delights in our obedience to Him. He loves to enable our victory and shares in the triumph.

Trials keep coming, but we are stronger together. The enemy will not win.

“The thief comes only to steal and kill and destroy; I have come that they may have life, and have it to the full” John 10:10 (NIV).

We are living life fully in forgiveness.

The GATHER Issue | Spring 2019 is now available through The Joyful Life Shop! Order The GATHER Issue today to receive it delivered directly to your mailbox the first week of March! 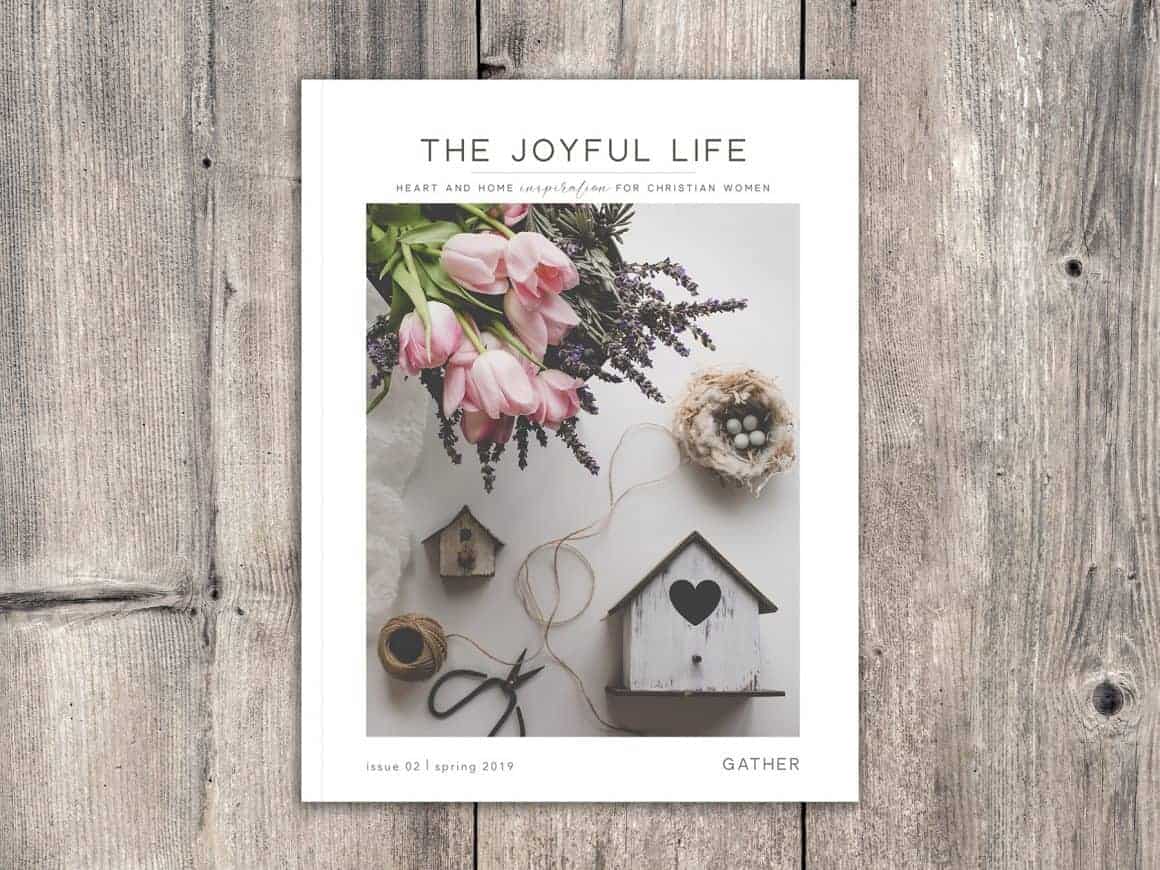 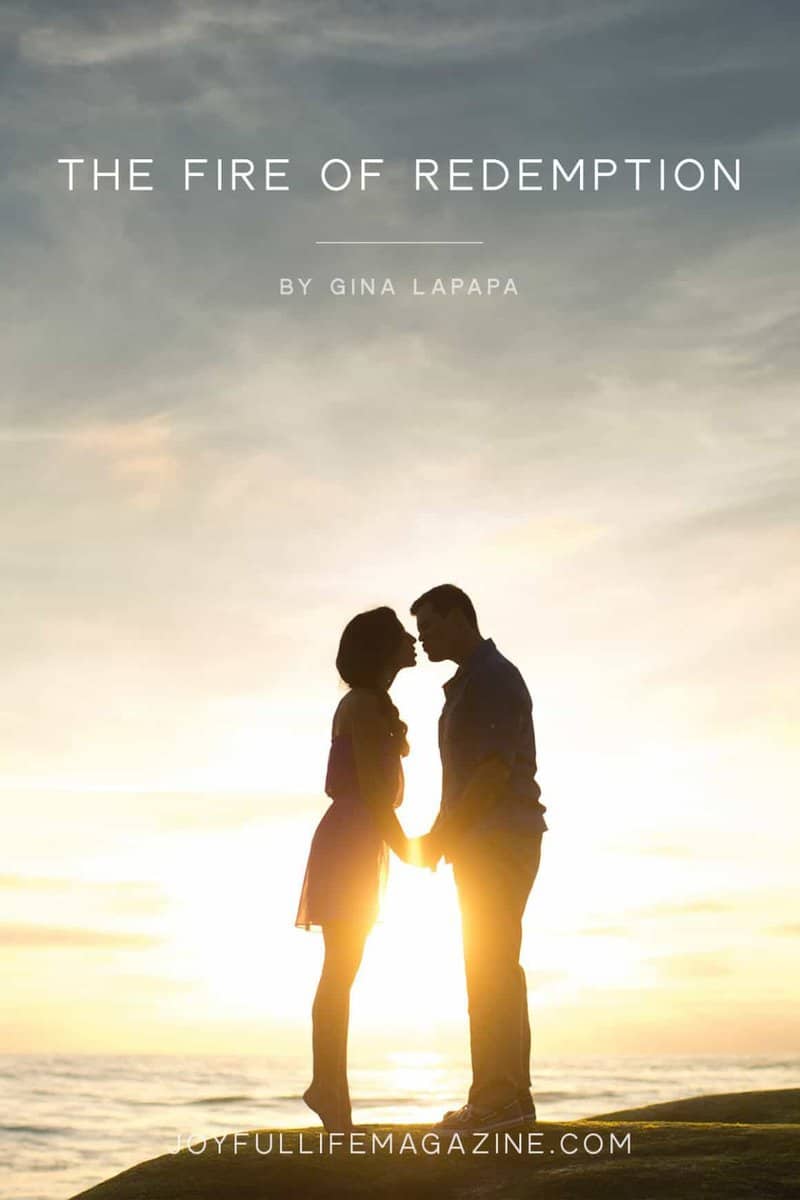 Gina LaPapa is a breast cancer overcomer, speaker, writer, and mentor for people who want to grow their faith through their own trials. Connect with her at www.BeingBrave.Faith where she is a faith warrior encourager; a place to inspire her community in “Growing Your Faith Through Everyday Brave Moments”. She is married to a very patient man and mama to 5 (step, bio, and adopted).