It was worse than I thought. But I suppose that’s what you get when you agree to buy a house you didn’t look at beforehand.

It had been a frustrating search. We were ready to buy a home, but finding something suitable proved challenging. Every day, I scoured websites for homes in our area and in our budget. As time went on and I found nothing, I began to get anxious. My husband, on the other hand, didn’t seem worried at all.

One day as I was praying about the situation, God whispered to my heart, “You are stressed because you are carrying the weight of a burden that is not yours to bear. Your job is to make a home. Let it be Jim’s job to find the house.”

I knew He was right. That night at dinner, I looked at my husband and said, “I’ve been going about this all wrong. It’s not my job to find a house, it’s my job to make it a home. You need to find us a house!” He simply nodded and carried on eating. I, however, felt the relief of releasing a burden I no longer needed to carry.

Two weeks later, as we were preparing to go to bed, Jim looked at me and said, “How about the trailer?” I stopped in my tracks. I knew exactly which home he was talking about.

It was an old, double-wide, mobile home with a basement we had spotted on a drive through the countryside. The property was gorgeous, the location was perfect, but the house was ugly as sin. I stared at Jim trying to determine if he was serious when God reminded me of the words He had spoken weeks before. I looked my husband in the eye and said, “Buy it.”

“Don’t you want to look at it?” he asked incredulously.

“Nope. What’s the point? I already know it will be ugly.” And that’s how I agreed to buy a house I had never laid eyes on.

We managed to arrange a quick tour one rainy summer day. I remember very little of the tour other than the buckets placed strategically around the house to catch the rain as it leaked through the ceiling, but I remember it was uglier than I had anticipated.

As we waited for the possession date, my memory of its ugliness faded. Perhaps it wasn’t as bad as I remembered. Maybe I had only imagined how awful it was. Moving day arrived. Since Jim had to work, I went to tour our new home by myself.

As I walked through the front door, a sense of fresh horror washed over me. What had we done?!

I couldn’t decide what was most offensive to my eyes: Was it the yellow and green linoleum? The brown and yellow carpet? The pale pink walls? Or was it the blue and white cupboards in the kitchen with the yellow countertop? Or wait…white countertop? There were two different kinds. The house was a kaleidoscope of color—a virtual assault on the senses. Not to mention, the ceiling sagged, the windows were old, and it had a certain I’m-a-really-old-house-but-you-will-never-figure-it-out smell. To say I was overwhelmed was an understatement.

I came home numbed by all I had seen and worried we had made a huge mistake. I tried describing how horrible it was to my husband, but my eyes still hurt, and I couldn’t find the words. It was ours now—for better or worse.

On moving day, friends pitched in to help us move. No one said a word about the house, preferring to focus on the beauty of the yard. I laughed at their politeness for I already knew what they were thinking. It was difficult to find anything nice to say except “Welcome home.”

Our plan was to live in the ugly house for a few years before tearing it down and building a new home. Until then, I was going to have to fix what I could with paint—buckets and buckets of paint. And so I went to work, determined to turn this ugly-as-sin house into a home.

But God has a peculiar way of taking what we think is a negative and turning it into a gift. I could never have imagined what a gift this house would be to me, and how it would change my life. How could a house so ugly give gifts so beautiful?

God has a peculiar way of taking what we think is a negative and turning it into a gift.

THE GIFT OF RENEWAL

At some point, we realized the bones of the house were still in good condition, so destroying it now seemed out of the question. We decided to begin the slow work of renovating the home from top to bottom—a process which took three years.

This came about at a particularly difficult time in my life. I was deep in a season of depression and struggling to overcome a lifetime of false teachings and assumptions. As the renovating process unfolded, I realized I was undergoing a renovation of my own. The process of renovating a house mirrored the process God was using to renew my heart.

Before a room could be rebuilt, it had to be stripped down to the bare bones. This was hard and tedious work. Every nail had to be pulled and every scrap of old wood needed to be torn out. Deconstructing a room was not nearly as exciting as rebuilding, but it was a vital and necessary part of the process. In the same way, God was renovating my heart, stripping away old thought patterns and pulling out the lies I believed. It was painful and sometimes ugly.

But in its place, God set my feet on a firm foundation—one built on His truth and one that could stand the test of time. It was a sweet season of drawing near to God and experiencing His healing in my heart, mind, and soul.

THE GIFT OF FAMILY

Renovating a home can be hard on a marriage, and at first, it was! Jim and I had never tackled a large project together, and we were unprepared for what it revealed in us and our relationship.

Our first project involved working with heavy beams outside on the veranda. It was late in the evening, a cold wind was blowing, and we were both miserable. I huffed. He puffed. And we both wondered if we were going to survive the coming days. But at some point, we realized the job would never get done if we allowed our feelings to get in the way. Setting our frustrations aside, we bent to work and finished the task.

We learned a valuable lesson that evening. Attacking each other only distracted us from the problem at hand. Better to save our energy for what was important rather than waste it squabbling. Gradually, we learned to work together as a team. I used my creativity to design and put in the finishing touches, while he used his knowledge of construction to ensure the home was well built. When I was exhausted, he spurred me on. When he was ready to quit, I gave him a reason to keep going.

Our children became accustomed to the sights and sounds of a house under renovation. Though they sometimes complained, they pitched in to help where they could. As the project unfolded and slowly the house transformed, they began to take pride in their contributions. It was now a family project. This was our home, and we were working together to make it better. The time we spent together strengthened our bond and laid a foundation for the coming years.

THE GIFT OF FRIENDSHIPS

In the meantime, I did my best to make this ugly house warm and inviting. We threw open the doors and invited friends for Sunday dinner, hosted birthday parties, and celebrated Christmas with family. No matter the mess, we found a way to enjoy fellowship.

Every week, a group of ladies would sit at my table studying the Bible while their children played in the basement. I soon realized the women enjoyed coming to my home because I was a relaxed hostess and didn’t worry if their kids made a mess. I never panicked when a child dropped food on the floor because the ugliness of the house would hide it. Walk in with muddy boots, no problem. Spill juice, no worries.

Sometimes I worried what people thought of our house, but eventually I understood that what we own does not define us. An ugly home can hold a beautiful heart. We had nothing to offer but ourselves, and that was enough.

As the renovating process unfolded, the old house started to become a new creation. Bit by bit, the new replaced the old, and beauty replaced the ugly. The end result was stunning! It was difficult to believe this beautiful, new house was the same one I had walked into years before.

When it sold, I grieved. It had become more than a house, it was a home in every sense of the word. Who would have thought that this old, ugly house would be a “good and perfect gift” from above? But God, in His infinite wisdom, knew what I needed long before I did, and for that I am profoundly grateful. 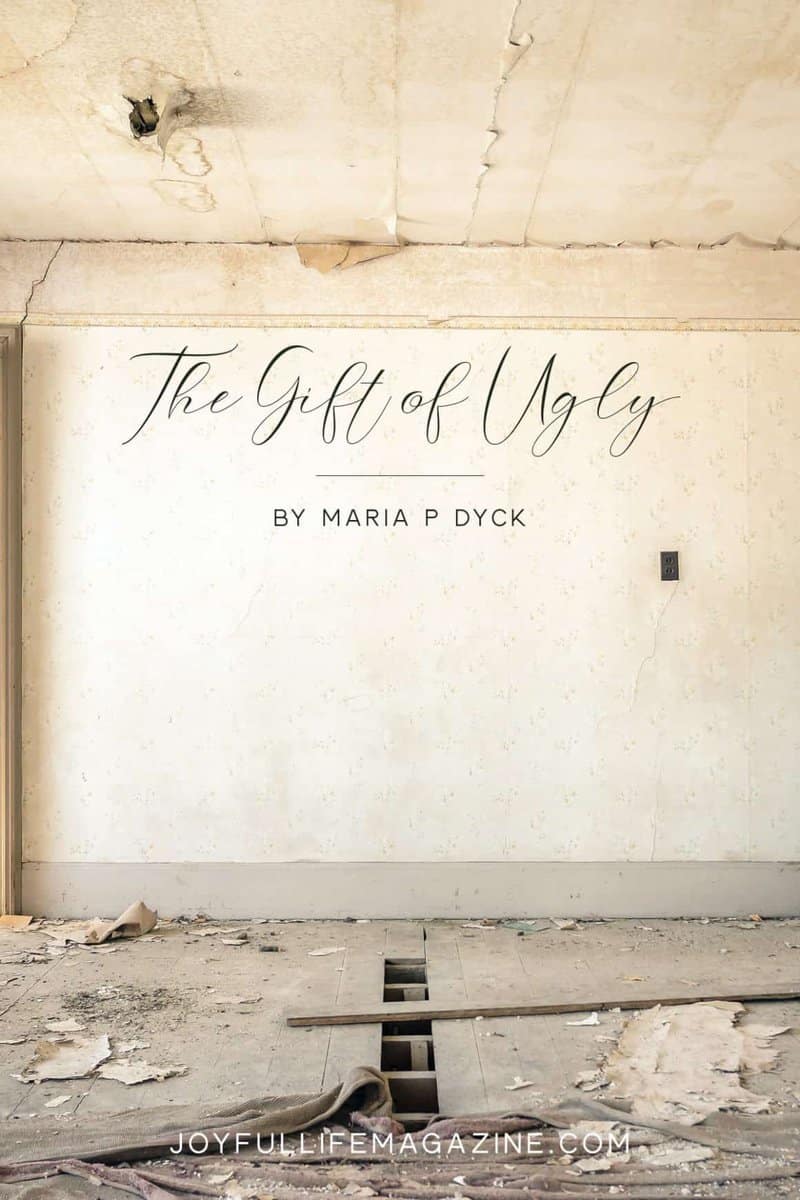