At just 11 years old, I remember hearing my Children’s Pastor talk about smuggling Bibles into the ‘-stan’ countries in Asia. I leaned forward, hanging on her every word, as she told us step-by-step about being stopped at gunpoint and the interior of their van being ripped out as they were strip-searched. Moments earlier, they’d flushed secret messages for underground Christians down the toilet only to later hear the guards ripping out the toilet system in the middle of the night. It was nail-biting stuff.

She had many stories of living life on the edge and living out faith to the full. Inspiring, dream-stirring stories that called the inner faith-warrior to the fore. One of the stories that stuck with me most was when their family didn’t have enough money to pay the rent. They hadn’t told anyone about it, and yet on the very morning the rent was due, an anonymous banker’s check for the exact amount—to the penny—came through the door and landed slap bang on their doormat.

This kind of stuff only happens to Christians who are special, up there in the faith ranks, right? They are the warriors of faith who would make the Hebrews 11 hall of fame. Not us normal Jane Doe types. The women who do their best not to shout at the kids when the children are testing their patience. The women who don’t quite manage to read their Bible every day. The women who strive to eat healthily but then find themselves secretly eating chocolate in the late hours… no? Just me?

And yet, fast-forward a couple of decades from my 11-year-old self and we, too, had an envelope come through our mailbox. Us. Normal, ordinary, us. My eldest son, 6 at the time, was the one to find it: “Mummy, mummy, mummy…. there’s an envelope and it’s full of money!”

Living with three kids and a husband working in full-time ministry—and self-funding his training on the side—after 10 years of marriage our collective income was the lowest it had ever been. In fact, when we looked back at our income there was a clear trajectory. Every year from the day we’d married we had earned less than the year before. For 10 years. That wasn’t how it was supposed to be.

And yet, here we were with an envelope full of cash and a typed note letting us know that “Christmas is on us.” Wow. Way to bring me to my knees, Jesus. Because stuff like that doesn’t happen for the average person, right? Not for normal people, surely. And I mean, certainly not for something as frivolous as being able to buy Christmas food and presents.

Since that morning, there have been several times when money has shown up unexpectedly or people have blessed us way beyond our hopes or expectations. Like the time we emigrated from the UK to New Zealand, an unknown place where we had no connections, and the local church not only funded our move but, after 13 weeks of living out of suitcases, gave us a family holiday on arrival. Not only was their generosity humbling and mind-blowing, it was also not out of character for the way God had worked in our lives when it came to finances.

WHAT IS A TITHE?

The Bible introduces us to the idea of tithing. So what even is a tithe? Some Christians will use the word tithe to represent any finances given to the local church as an offering. However, most simply, it means ‘tenth’. The Law of Moses established tithes as a way of the Israelites giving back to God the first fruits, the first tenth, of all they had. This served to remind them of God’s sovereignty, a way of being thankful for His provision, and to provide for the Levites and the needy.

A tithe, by definition then, is 10%. As Christians, however, we are not bound by this number. We are to give generously, cheerfully, and as God directs (2 Corinthians 9:7).

THE CHALLENGE TO TITHE

I was first challenged about tithing by my older brother when I was 17. He suggested that tithing shouldn’t be restricted to a work income, but include any money received—student loans, birthday presents, Saturday jobs, the works. This was a big deal because we all know money is valuable and, yet, we also know we can’t serve two masters. We can’t love Jesus and money (Matthew 6:24). We must choose where we are going to put our trust. Being a black-and-white kinda girl when it comes to faith, I figured I’d put Malachi 3:10 to the test:

“Bring the full tithe into the storehouse, that there may be food in my house. And thereby put me to the test, says the Lord of hosts, if I will not open the windows of heaven for you and pour down for you a blessing until there is no more need.”

And so, at 17 years old, I started tithing. And I’ve never looked back.

We’re told many times we’re not to put God to the test (Matthew 4:7), yet in Malachi we’re told the exact opposite. This is the one area where God wants to be tested. He wants to be glorified in the way that He provides for His children. And provide He will. Does it always look like money coming through the front door? No. But His promise to “supply every need” we have according to “his riches in glory in Christ Jesus” still stands (Philippians 4:19).

But what if you don’t have enough money? The principle of tithing doesn’t apply only if you have a surplus. In fact, I would say the value of tithing increases especially if money is tight and making ends meet is a challenge. Ultimately, tithing shows I trust God more than I trust the balance in my bank account. Choosing to give money back to Him via the church is a practical outworking of that trust.

Ultimately, tithing shows I trust God more than I trust the balance in my bank account. Choosing to give money back to Him via the church is a practical outworking of that trust.

I have discovered many advantages to tithing over the years. Not least, it keeps my heart in check and reminds me I’m not God! If my heart is where I store up treasure (Matthew 6:21) then I want it to be stored in a God-centric way. When we tithe and offer our money back to God, it’s not saying that 10% is His and the rest is ours to do with whatever we want. It’s all His. He’s just letting us manage some of it, and the church gets to manage the bit we’ve given. According to Nonprofit Source, “tithers make up only 10-25 percent of a normal congregation.” Imagine how the church would be unfettered if all Christians tithed!

Here are some benefits of tithing to your local church:

• If you’ve worked hard to earn the money you give to your local church it means you’ll pay a lot more attention to what the church is doing with your tithe and will likely feel part of the community and church family in a deeper way.

• Tithing to your local church blesses the people and communities in which you’re living practically. Maybe your tithe goes towards community projects, food banks, or running ministries that directly impact local residents for their good and God’s glory.

• Many churches run solely on the giving from their members. Your tithe or offering will likely support ministers, pastors, administrative work, and practical ministries to be able to continue, or start in your church.

• Ultimately, tithing to your local church furthers the work of God’s Kingdom and the great commission right on your doorstep. Sign me up!

Personally, tithing also helps me feel like I’ve nailed at least one spiritual discipline even if I’m struggling on the rest. When you choose to tithe regularly, you don’t even consider the money as yours anymore. It becomes a habit. It’s so automatic (literally, when you set up a standing order or direct debit to your church) that you don’t feel like you’re ‘losing’ the money or missing out in any way. As I give secretly (because typically tithing and money isn’t something we usually talk about according to Matthew 6:1-4), I’m reminded of the truth that I am blessed to be a blessing.

Interestingly, the first tithe in the Bible preceded the law. In Genesis 14:18-20, we read how Abraham successfully returned from battle and proceeded to give Melchizedek, the priest, “a tenth of everything.” God never commanded Abraham to give 10% of his spoils from war. It appears from the Scriptures that it was something he wanted to do. Blessed to be a blessing. Out of the generosity and goodness of God, Abraham wanted to acknowledge God’s faithfulness and give back to Him as a sign of gratitude.

We, too, can live lives overflowing with gratitude to God. It may seem like giving money away is an odd way of expressing thankfulness, but it truly is one of the best ways. Paul exhorts us to remember the words of Jesus that “it is more blessed to give than to receive” (Acts 20:35). I have known the joy and truth of this so intently over the past 20 years as God has time and again blessed me when I give of myself––whether it’s my time, gifts, skills, or love, but especially, financially.

Just yesterday, my husband received a phone call from someone unknown to us letting him know there was a grant for pastors and their families which provides funding for holidays, and he wanted to bless our family in this way. Wow. And then on the very same day, when logging into our bank account because er, ‘funds were tight’, there was almost $1,000 more than I was expecting to see. How? We had a tax rebate. Just when we needed it. Just at the right time.

So if you’re new to tithing or have been a sporadic tither to this point, let me encourage you to make it a priority. Our God is a generous God who blesses and always provides what we need, always in His perfect timing.

Why not go all in on Malachi 3:10 and test God in your tithing? See what He does as you fully trust Him—not just with parts of your life, but with your whole life, cash included! He won’t let you down.

What are the blessings, financial or otherwise, that you personally have experienced or received from a tithing life? Share with us in the comments. 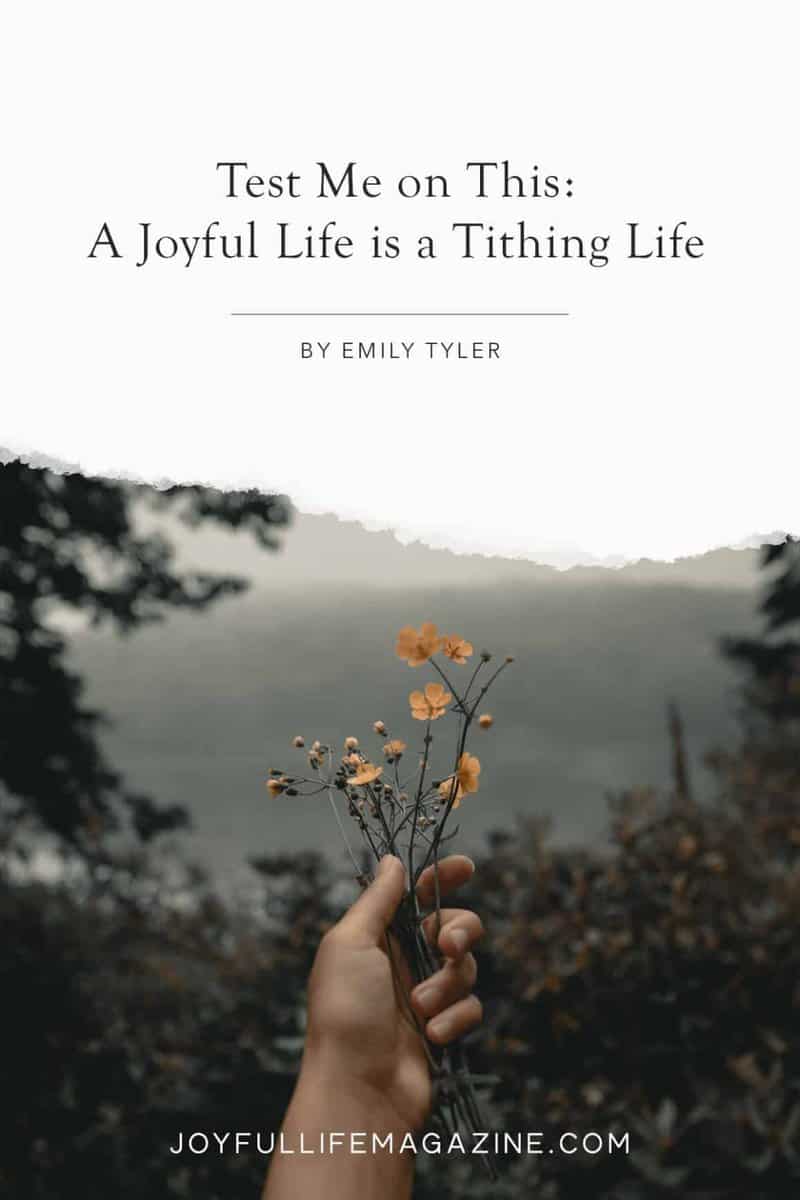 Originally from England, Emily and her husband now pastor a church in Auckland with their three kids in tow. Always with her faith on display and heart on her sleeve she is a preacher/speaker, actor, artist, pastor and coach. Emily is driven to see God's people Grow and Go: grow in their understanding of who Christ is and who they are in Him and then be released to go in freedom and grace to change the world right where they are. You can find her writing on Facebook.