I woke that morning in the unfamiliar surroundings of a hospital room. It had been a turbulent 48 hours. We had gone from celebrating our son’s ninth birthday to rushing him by ambulance to a local hospital as his health traumatically and rapidly declined. Following a diagnosis of Diabetic Ketoacidosis, his survival hanged in the balance and the threat of brain damage was yet to be determined. As the ambulance doors closed on my little boy, en-route to a specialist pediatric hospital, I had no choice but to entrust him to the medical staff fighting to save his life. This was the first of many times in our journey with Type 1 Diabetes where I simply had to trust; there was nothing more I could do.

I woke that Saturday morning physically and emotionally exhausted from the previous days of trauma. My son had been brought out of his induced coma and subsequent brain-scans had revealed no impairment. After smiling and joking with the staff in the ICU, he had been downgraded to a high-dependency ward as he continued to show improvement. I had a lot to be thankful for, yet the fear of coping with the ‘forever’ diagnosis of Type 1 Diabetes was never far from my thoughts.

I was daunted by the darkness I now saw for our future. I had never felt called to be a nurse—the thought of giving injections and working out insulin doses filled me with fear. Struggling to form a coherent prayer of my own, I relied on the prayers said on our behalf by fellow brothers and sisters in Christ, and the repeating chorus of one of my favorite worship songs—Stuart Townend’s arrangement of Psalm 23:

In despair, I pleaded with God in a way I had never done before:

“Lord, I can’t cope with forever, but with your help, I can do today.”

LIVING IN THE SHADOWS

A decade has passed since that morning—ten years since I resolved that I would trust.

There were many dark times in those years. For a long time, I was crippled with anxiety, transforming from a relaxed, experienced mom of three, to one who saw potential danger around every corner and jumped out of my skin at any sudden sound. My stomach felt perpetually knotted. I desperately wanted to live the abundant life that Christ spoke about in John 10:10, but my existence seemed more like a burden. I woke each day wondering ‘What crisis will hit me today?’

There were years of mere survival when basic functioning was all I could manage and joy seemed elusive. My days were spent balancing insulin requirements with food intake, a lifesaving process made all the more difficult by the variables that exist for a growing boy—shifting hormones, illness, travel, changes in routine, and even variations in the weather. I lived a stressful daily existence, knowing one incorrect calculation could kill my son or lead to long term health effects. He suffered too—missing out on invitations to sleepovers and parties due to the fear around his diagnosis, and having his education compromised when mental and physical illness took its toll on school attendance.

Additional health complications for all three of our children meant that life revolved around countless medical appointments and multiple hospital admissions. My husband’s job became increasingly difficult, and for a long time, our church too became an additional source of stress.

WRESTLING IN THE DARKNESS

I began to wrestle with the heavy weight of my caregiver role. I knew in my heart that our son and two daughters were gifts from God. In His sovereignty, He had known them since before the creation of the world and had apportioned their days. Still, I was weary and burdened with my perceived responsibilities. Having nearly lost one of our precious children, I lived as though everything depended on me.

I sought to escape the limitations of my current role by attempting to be involved ‘Christian‘ activities, as I had done in the past, becoming frustrated when my plans were thwarted. Once more I found solace in the hopeful, comforting words of Psalm 23:2-3:

“He makes me lie down in green pastures.

He leads me beside still waters.

He restores my soul.”

Slowly the realization dawned that caring for my children was my most important ministry—and God, who had entrusted these precious lives to my care, was present with me in this difficult season. I began to seek Him more fervently, taking more opportunities to feed on His Word through home and Bible study groups, reading Christian literature, and listening to online sermons from gifted and godly expositors. Slowly but surely, piece by piece, I felt the darkness lifting, and my soul being restored.

HE RESTORES MY SOUL

I have repeated that same prayer to God many times since that morning in my son’s hospital room. He has not once let me down.

As Isaiah 26:3-4 says, “You keep him in perfect peace whose mind is stayed on you, because he trusts in you. Trust in the Lord forever, for the Lord is an everlasting rock.”

I have trusted the Everlasting Rock through raging storms, even when it has felt as though I am holding on by whitened fingertips. The Rock has not disappointed. He can be trusted. Charles Spurgeon once said: “I have learnt to kiss the wave that throws me against the Rock of Ages.” I now know what he meant.

Not many of us would choose to write hardships into our own life narrative, but it is through these times that we learn to love and to trust God more. Perhaps the greater spiritual danger comes from easier times when there is a temptation to run ahead, trusting more in our own strength and abilities. I have learned the truth that self-sufficiency has no need to trust, and thus misses out on a greater blessing—the sanctification that comes from walking a road of suffering, producing endurance, character, and hope. Before my son’s diagnosis, I understood the concept of trusting God—we all do, in theory—but His faithfulness in the intervening years has confirmed and cultivated that trust. It’s a trust that has grown through struggle and difficulty when my own feeble strength was inadequate for the task.

Perhaps the greater spiritual danger comes from easier times when there is a temptation to run ahead, trusting more in our own strength and abilities.

A verse from the old hymn ‘He Giveth More Grace,’ by Annie Johnson Flint expresses perfectly how I have felt cultivating this trust in the difficult seasons of life.

“When we have exhausted our store of endurance,

When our strength has failed ere the day is half done,

When we reach the end of our hoarded resources,

Our Father’s full giving is only begun.”

As I have wrestled with God through the years raising my children, He has reminded me over and over that I can trust in Him—for today, tomorrow, and eternity. My children are His first, He has called them by name and knows the number of hairs on their heads. Entrusted with the privilege of being their mom, my love and trust in Him will only continue to grow as I navigate this journey with Him by my side. 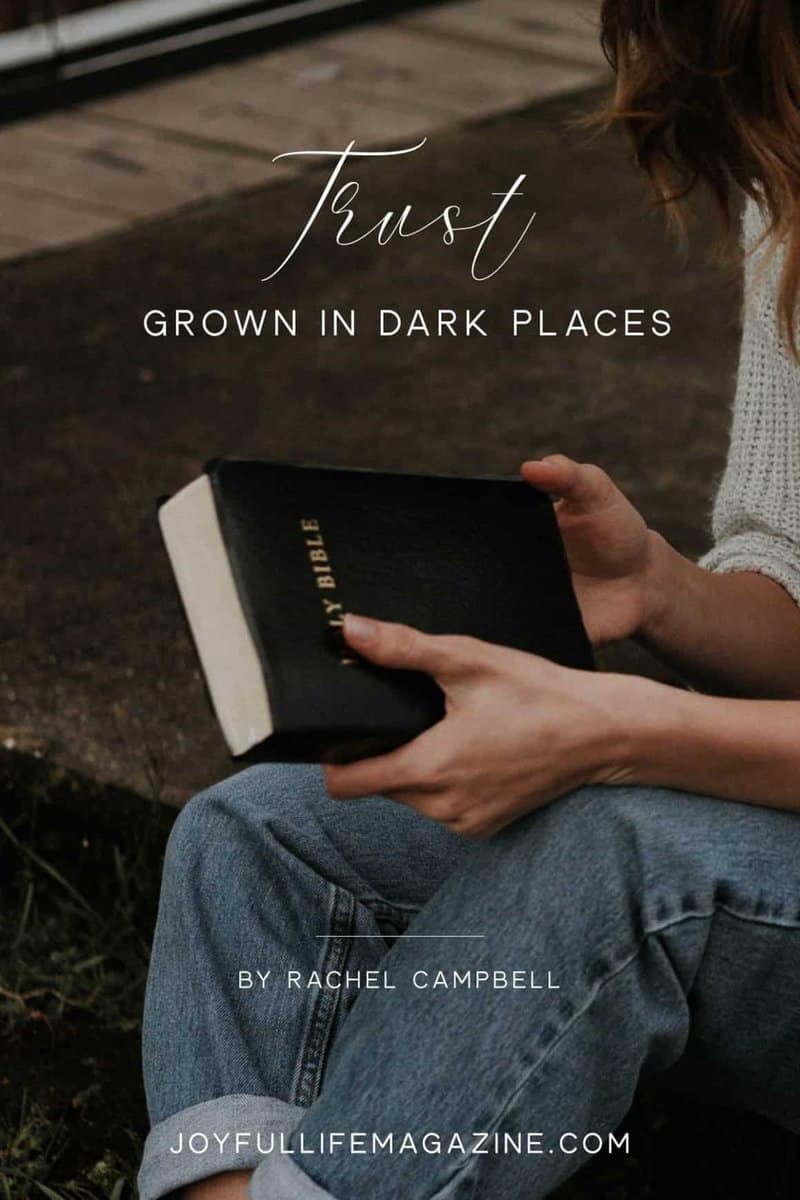 Rachel was born in Wales and now lives in Manchester, UK, with her husband Grant, a New Zealander, and her three children, Ben, Grace and Lydia. She is undertaking the second year of a biblical literacy course, and cares deeply for the faithful ministry of God’s Word, pastoral care, parenting, children with additional needs, and education in all its forms. She tweets at @OurRachToo.