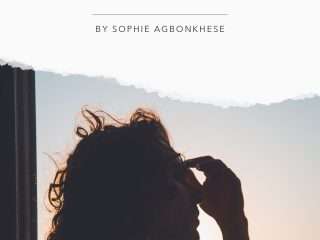 Few among us could claim to be unfamiliar with uncertain times anymore. If anything, we’ve learned that certain times are likely a myth. But one thing that remains steady, no matter our circumstances, is the faithfulness of our God. Here, Sophie Agbonkhese shares the four steps that have helped her get better at trusting God in times of uncertainty.

I don’t normally answer my cell phone while jogging through the woods with my best friend, but this time, I listened intently for the phone to ring. I’d received a worrying text from my husband earlier that morning concerning the health of his sister and her unborn child.

As soon as he called, I snatched my phone from the pocket of my sweatpants and grilled him on the situation. Things were bad. His sister, who lived in Nigeria and was 24 weeks into a difficult pregnancy, was being flown to Atlanta immediately for an emergency Caesarean. The hospitals in her country did not have the resources to save such a premature infant.

There are occasional moments in my life when I hear the Holy Spirit’s instructions with such clarity and insistence, they cannot be ignored. This was one of those times. He told me I needed to be at the airport when her flight landed in Atlanta.

Though this seemed impossible—I live in Vancouver, Canada, homeschool four young children, and hadn’t been on a plane in almost a decade—I was able to obey this command with no small reliance on grace.

When her plane landed in the US the next morning, I was waiting at the gate, and after a bumpy ambulance right to the hospital, we learned there was no need for the operation and she’d be able to continue her pregnancy under careful medical supervision.

After several days recuperating in Atlanta, my sister-in-law and I returned home to Vancouver, with the well-being of her and her baby weighing heavily on me as her designated caretaker. She stayed in our home for a month until her mother and older son arrived to join her, then moved into a rental for the last two months of her pregnancy.

What followed was a season of prolonged stress unlike any I’ve experienced before. My husband, who suffers from a rare and painful neurological condition, had to leave the country for several weeks to seek reprieve from his own unbearable pain.

My new nephew was born in February, several weeks ahead of schedule and weighing just four pounds.

My husband was still out of the country and raced to catch a last-ditch flight back to Canada, followed by a 14-day quarantine.

A week later, Nigeria shut its borders, even to its own citizens, and our family members were officially stranded in Vancouver.

The four of them moved in with us and stayed nearly five months until they were finally able to return home.

With 10 people living in our small house, stress was unbelievably high. My husband slept in the living room; I slept on the floor of my office; and somehow, though we were both working from home, we seemed to spend most of our time apart. It was a dark season.

Early on, when the first cracks appeared in my world, I started having anxiety attacks. I knew I needed to stay strong and healthy for my children, so I reached out to a family friend and physician and poured my heart out to him.

The coping strategies he recommended got me through those dark days, and continue to help me through the less tumultuous, yet still uncertain, times we face today.

1. ACKNOWLEDGE YOUR CIRCUMSTANCES AND THEIR EFFECT ON YOU

In that first phone call, I babbled on to my friend for nearly an hour. When I’d recited my list of anxiety-inducing circumstances, I told him, “I don’t know why I’m so stressed and anxious right now. I feel like I should be able to handle this, but I just can’t.”

His reply brought me back down to earth. “Did you just hear the same story I did? Your husband’s in another country, you’re caring for all those kids yourself, and the world just shut down. I think there’d be something wrong with you if you weren’t having a hard time dealing with that.”

As women, we’re used to caring for everyone else, to being the warm, sturdy, comfortable place where our loved ones can come and pour out their own pain. We forget that we, too, have pain that needs to be recognized and healed.

Realizing that the situation was bigger than me, that I was overwhelmed—and that that was okay—was the first step toward healing.

As women, we’re used to caring for everyone else, to being the warm, sturdy, comfortable place where our loved ones can come and pour out their own pain. We forget that we, too, have pain that needs to be recognized and healed.

2. STEEP YOURSELF IN SPIRITUAL DISCIPLINE

The timing was somewhat ironic. Less than a month before, I’d stood up in church and given a sermon about spiritual discipline—and, in particular, how my fasting practice had changed my life. I knew my friend had heard it too, so I felt embarrassed admitting I’d fallen away from my holy habits in such short order.

Knowing me as he did though, he led me back into those soul-satisfying rituals, starting with meditation. “Just meditate,” he told me. “Meet with God in the morning, or whenever you’re able. Listen for His voice. Allow Him to comfort you. Approach each day anew and seek His grace and wisdom for that day.”

It can be difficult to make time for spiritual discipline when life is good, but in times of hardship, we are even less inclined to make time to immerse ourselves in God’s goodness. Usually, our first response is to try and solve our problems on our own.

Yet, this is when we need Him the most. Meditation, prayer, thanksgiving, worship, reading the Psalms—all of these are our spiritual medicine as we journey toward healing.

3. CONNECT WITH A FRIEND

Have you ever seen that show, “Who Wants to Be a Millionaire?” When contestants are stuck, they are given a lifeline and are able to call a friend. I always found it interesting how these contestants had just the right person to call for any given question. As I learned to sit with my fears and lean on God, it turned out I, too, was in need of such a lifeline.

I began connecting with a friend or two on a regular basis to talk about what was going on in our lives, and started a tradition of meeting a friend for a walk around a lake two to three nights a week. (Thanks to lockdown, we now had time for such activities!)

It felt so good to speak my fears out loud to wise and mature friends who took the time to help me see how God was moving in my life through these circumstances. With each lap around the lake, the weight on my shoulders lessened, and I felt more capable of returning home to my family, my responsibilities, and the uncertainty that remained.

The fresh air and exercise probably didn’t hurt either!

4. LIVE OUT THE SERENITY PRAYER

If there was anything I learned from the early months of the pandemic, it was that I have much less control over my life than I think I do. For all the worrying, planning, stressing, coffee-drinking, sleep-skipping, and general scheming I do, there is actually very little about my life that is in my hands. I had made so many plans for last year, and as each one was stripped away and replaced by new situations—some wonderful, some heart-wrenching, but all entirely unexpected—I realized it wasn’t all up to me.

I know it sounds cliche; we’ve probably all heard it hundreds of times, but the Serenity Prayer rings truer for me now than it ever has before.

God, grant me the serenity to accept the things I cannot change,

The courage to change the things I can,

And the wisdom to know the difference.

God is still sovereign today. He is still in control over my life and over yours. Even when we feel things spiraling out of control, we can rest assured in our knowledge that He is intimately familiar with our circumstances, and that He is working in them for good.

Learning to let go of my need to control every aspect of my life has not been easy, but it has been the only path forward, and I believe the one He calls us to travel.

Truthfully, there are still some days when it feels like it would be easier to stay in bed than face the realities of life. Nevertheless, these four steps have become a centering practice for me, a routine I can turn to when stressful circumstances threaten to overwhelm me once more. Now, no matter what lies ahead, I know that connecting with God and good friends, and cultivating acceptance and wisdom along the way, are the best defenses I have when it comes to battling my anxious thoughts.

Sophie and her husband Ben live in a suburb of Vancouver, Canada with their four children, whom they have homeschooled for the past nine years. Serial entrepreneurs at heart, Sophie and Ben have run home-based businesses since their college days and still enjoy taking on new ventures together when the opportunity arises. Sophie is also an aspiring novelist and the creator of www.mycuprunsover.ca, a site dedicated to helping busy women flourish in their homes, homeschools, and personal lives.