Back when I was working full-time in corporate America I had a relationship with a co-worker that was so full of tension I often found myself driving to work with my stomach in knots. I was very young at the time, and the position I had worked my way into was equal in status to hers, which did not sit well with her at all. Fran was 7 years older than me and I didn’t realize it at the time, but I think she may have felt intimidated. I simply felt despised.

We were as different as two people could be. Christian vs. Atheist. Conservative vs. Liberal. Homebody vs. party girl. She was loud, abrasive, and boldly confident. I was diligent, kept to myself, and quietly secure.

My oldest child was 10 months old at the time and I recall coming into work one morning after being home with him the previous two days while he was being treated for RSV—a potentially life-threatening illness. I opened the door to our office with a heavy heart, still unable to shake the guilt and grief of having left him just an hour before. As I approached the board behind the reception desk where everyone on our floor checked in each day by moving a magnetic dot from the OUT column to the IN, I found a sticky note next to my name with Fran’s handwritten words:

“OUT WITH A SICK BABY (or so she claims)” with a caricature-drawn face below with eyes rolled upward.

I stared at that note for a long moment, my heart beating rapidly; I fought hard against tears before I slowly reached up to pull it down. But the receptionist moved in quicker than I could and tore it off the board with a casually dismissive, “I’m so sorry—I can’t believe she wrote that” and then quickly returned to answering the phone.

But I could believe it.

My heart was spiraling with a dozen painful questions as I walked down the long hall toward the office Fran and I shared.

How long had the note been there?

How many people had seen it?

How many of my co-workers were now questioning my integrity? My work ethic? My honesty?

How many had joined her in laughing at my expense or mocking me in the break room during the days I had been away?

How could she be so cruel to involve my gravely ill baby?

For a 21-year-old, single mom doing everything she could to keep it together on a daily basis and mourning leaving her child every healthy day, let alone during illness—it hurt like hell.

I wanted to walk into our office and tell her what a horrible person she was. I wanted to hurt her as much as she had hurt me. I wanted to publicly humiliate her and make sure everyone knew how awful she was. And I desperately wanted validation and the security of knowing that my other co-workers saw her true colors and felt the same way I did.

But instead of unleashing my pain and anger on her—something entirely unexpected came out of my mouth when I walked into our office. It was as if the words tumbled out involuntarily.

I think she expected an angry war—or perhaps a victory in the form of a tearful entry because she was clearly caught off guard by my question. To be honest, so was I.

But it was the question that God had intended to fill the air that morning and it sat hovering above us like a dark cloud desperate to pour out its rain. It was a long, eye-locked moment before she answered.

She looked down at the floor then and it felt like an eternity before she looked back up, her own eyes filled with tears now.

I didn’t know either, but with a great deal of certainty, I suspected. I don’t recall exactly how I knew that my Christianity offended her, but it had been obvious for months that it did.

But that morning God orchestrated something between us that I never could have orchestrated on my own—especially in the midst of the pain and anger from the gaping wound I was still tending.

That morning, He softened hard edges. Both hers and mine.

With a simple Spirit-fed question that tumbled out of my mouth in a moment of confused anger and hurt, God coaxed two enemies to the battle line that had been drawn and invited us to stand in the rain together under the weight of a painful question.

In the awkward silence that filled the next several moments something profound seemed to happen. We were both forced to acknowledge a very real truth that lied at the foundation of our war.

Where people are involved—real hearts are hurting.

There is such a palpable tension in our country right now. It seems that nothing stirs up division among people like an election. We retreat to our own side so easily and justify every stone hurled over the line. Our words become weapons and we so quickly find ourselves on the attack. Christians and Atheists. Conservatives and Liberals. Homebodies and Party Girls. We’re all so easily drawn into battle.

Perhaps your hard edges need softening? We all have them. Can I encourage you to remind yourself again:

Where people are involved—real hearts are hurting.

Regardless of which side of the divide you make your home—God is inviting you to the line. He is inviting you to stand in the rain with your enemies and allow them to feel, to see, and to experience the softness that replaces the hard edges when our hearts are surrendered to God. 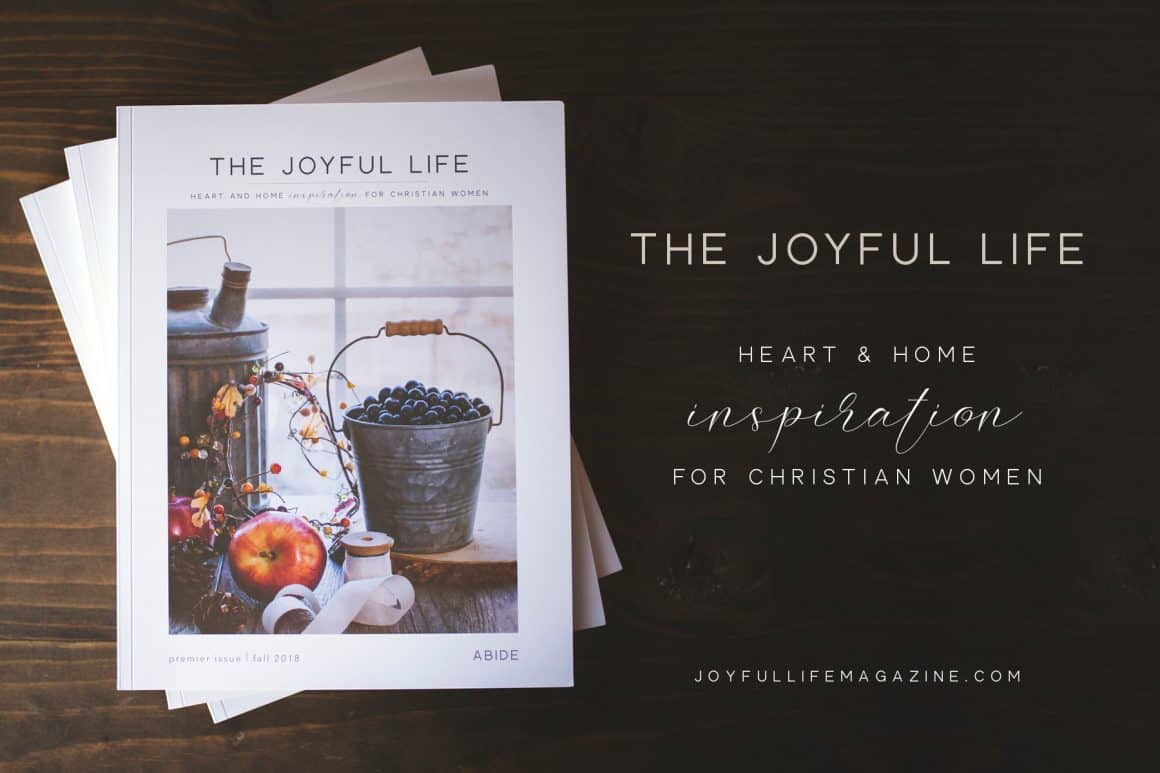 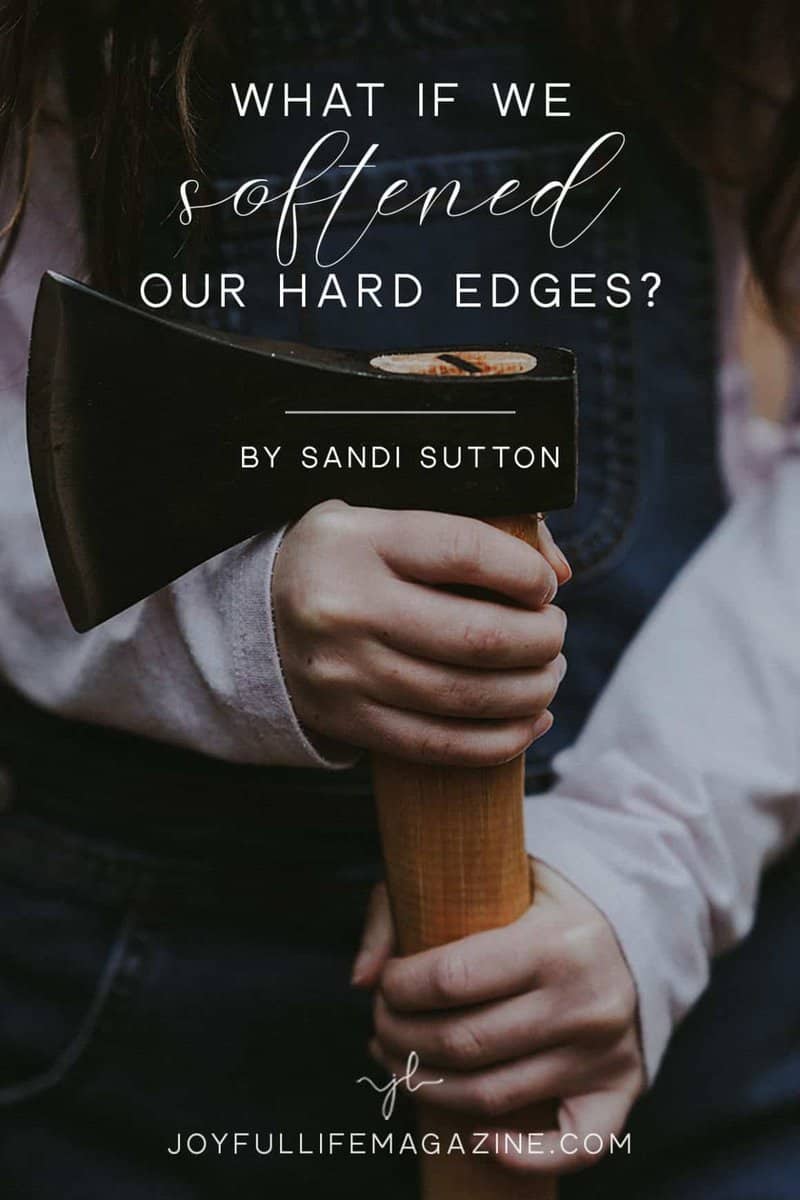 Sandi Warner is married to her favorite person in the world, her husband Tim, and is the mother of 5 children (4 boys and 1 girl) ages 9 to 27. She is the Founder and Editor of The Joyful Life Magazine, as well as a Christian writer, photographer, DIY enthusiast, and pinner of food. She writes about navigating life by leaning hard on grace and Jesus.