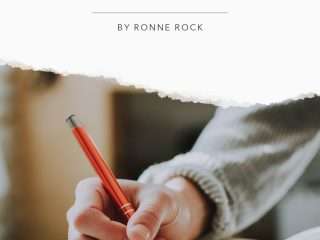 When we sit down to set our goals, few of us write down things like, “I want to make more mistakes.” Failures feel like, well, failures, not lessons or opportunities or things to aspire to, and they certainly don’t feel like successes. And yet, failure is inevitable. We will all try and fail repeatedly before we succeed. These twelve reasons why failure is good may just inspire you to sidestep your fear of getting it wrong.

After getting all of my early morning things done, I sat at my computer with a journal filled with notes and a plan to share six beautiful leadership principles I’ve learned from two tiny churches. There were great insights into the power of being neighborly and the one thing that matters most as we work diligently to balance home life and work life and ‘life’ life while leading and serving well (spoiler alert: it’s prayer).

Trust me, I needed prayer as I stared at the words on the screen. The concept was a good one. I had gathered stories about those tiny churches, and I was energized and ready to write.

It wasn’t a writing problem at all. No, today I failed gloriously at numbers.

You see, I miscounted those principles and came up short. My idea started off well, but as I wrote, I realized it was more like a solid three with a wiggly four and a non-existent five and six.

I write leadership articles all the time, I thought. I’ve even written a book that lauds the influence and impact of women around the world. Surely, those tiny churches had taught me six things. Surely, I was just having a momentary memory lapse.

But the more I labored, the more laborious things became. The words felt forced and inauthentic. And so, I chose to do something different.

I chose to fail. For you.

There are articles and books galore on ways to succeed. There are a lot of words about pressing on and pursuing excellence. But rarely are words offered up about the goodness of failing.

And if we want to lead well, no matter where that leadership might find us, you and I need to learn to fail gloriously. Here are far more than six reasons why failure is good for us:

It’s true. We’re all going to fail at things. As long as we’re learning and trying, we will fail. We will stumble, and we will rise, and we will try again. We’re in good company. I promise.

C.S. Lewis writes, “Failures, repeated failures, are finger posts on the road to achievement. One fails forward toward success.” And Psalm 37:24 (in the Message translation) reminds us, “If he stumbles, he’s not down for long; God has a grip on his hand.”

At its core, failure is simply ‘feedback’. We’ll talk next about failure being a teacher, but it is also a faithful informer of where our focus should be. Given an opportunity, failure can help us reset our priorities. For example, my failure allowed me to consider the greater purpose in the articles I write here at Joyful Life—to provide authentic and honest encouragement and road-tested wisdom.

Suffering a creative misstep does not nullify that purpose. In fact, it reinforces it.

FAILURE IS A GREAT TEACHER

When I first learned how to ride a bike, I thought I knew how to use the brakes properly. I quickly (and painfully) learned there was a better way to stop after tumbling over the handlebars when tapping on the front brake only.

When I was given my first opportunity to supervise people at a job, I thought I knew exactly what to do. I made lists and lots of rules (which wearied lots and lots of people, including me). I thank God now for every fumble I made that taught me there was a better and more purposeful way to care for people and projects and passions.

Every failure is a lesson learned. Without failure, we’ll never know if there’s a better way.

If we want to lead well, no matter where that leadership might find us, you and I need to learn to fail gloriously.

Taking the next step after a misstep builds the muscles of resilience and character. Every time we rise after failing, we rise with heightened focus and clarity because of our experience.

Falling face-first on the ground lets us see the gravel we failed to notice in our rush to win the race. Failure helps us become more aware of our surroundings, so we become responsive. We see failure as a piece of the powerful work of God’s grace and redemption in our lives and in the lives of our families, friends, coworkers, and neighbors. We see Romans 8:28 brought to life:

Living in a culture that is success-driven, we can become terrified of anything but sure bets. When we view failure not as an enemy to success but as a natural part of growth, the strength we are given bolsters our courage to take calculated risks and dream new dreams and to encourage those dreams in others.

Our success-driven culture is enamored by quick results. Failure is a very real reminder that true success takes time and patience and practice. One perfectly prepared meal doesn’t make us a chef (though it does look great on Instagram). One win does not equal a championship season. One great decision does not equate to wisdom. Failure tempers us and helps us set a better pace.

We’ve all had a moment when we misjudge our value or abilities and, sometimes, it can royally backfire. Failure is a great teacher in learning your own personal limitations and figuring out how to do better next time.

A study in the Journal of Applied Psychology revealed that processing our failures in a healthy way results in a higher rate of learning. And that learning can qualify us to be better mentors as we lead. Because of what failure has taught us, we are better equipped to help others to focus and find creative approaches to challenges.

Failure not only builds our character and grows our wisdom; it creates common ground for those who also hunger for success and fulfillment. We can honestly say, “I’ve been there too” when we are providing encouragement. We can offer road-tested insights. And we instill confidence in those we are leading.

FAILURE OPENS OUR EYES TO HOPE

One thing is certain: Failure isn’t final. In fact, we are given the promise that the Lord is ever-faithful in the days that go well and in the days that fail gloriously. Philippians 1:6 provides such encouragement for us:

“There has never been the slightest doubt in my mind that the God who started this great work in you would keep at it and bring it to a flourishing finish on the very day Christ Jesus appears” (The Message Translation).

Failure teaches us, strengthens us, emboldens us, awakens us, and humbles us. It gives us wisdom and compassion. It opens our eyes and our hearts to the promise of better days. We can move forward with hope. And we can share that hope with others. That, indeed, is a glorious thing.

Ronne Rock weaves themes of transformative hope and grace-filled leadership into everything she shares on page and stage. She’s an author and speaker—offering honest encouragement and road-tested wisdom about topics ranging from leadership and ministry engagement to discovering your God-crafted design and purpose. Her book, One Woman Can Change the World: Reclaiming Your God-Designed Influence and Impact Right Where You Are, is available wherever books are sold. An Oklahoma gal by birth, Ronne now lives in the Texas Hill Country with her husband, Brad, and rescue pup, Pearl. Her son and his family live in Arizona, which Ronne has deemed way too far away. You can find more of her writing on her website.